The US Senate has confirmed a key ally of President Obama as the new treasury secretary. Jack Lew's appointment came as newly inaugurated Defense Secretary Chuck Hagel began work at the Pentagon. 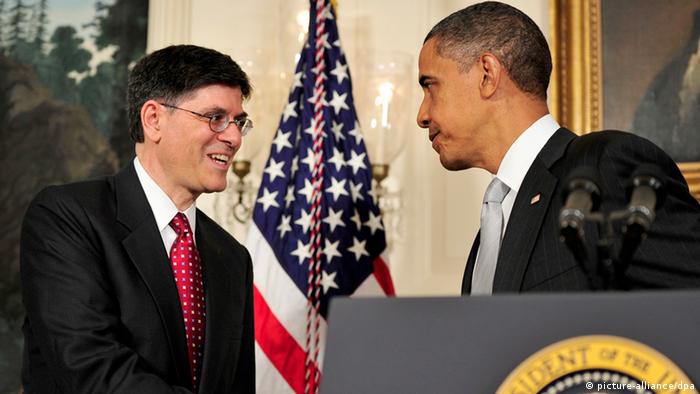 The Senate voted 71-26 to approve President Obama's former chief of staff as US treasury secretary on Wednesday. His appointment comes amid ongoing economic uncertainty and crucial negotiations over the US budget and debt.

"At this critical time for our economy and our country, there is no one more qualified for this position than Jack," Obama said in a statement shortly after the vote.

"As my chief of staff, Jack was by my side as we confronted our nation's toughest challenges," Obama said, hailing Lew as "a master of fiscal issues who can work with leaders on both sides of the aisle."

The US Senate has voted to confirm Chuck Hagel as President Obama's Secretary of Defense. His nomination passed despite strong opposition from Republican Senators, who had previously succeeded in delaying the vote. (26.02.2013)

Prior to his nomination Lew, 57, had served as Obama's chief of staff for just over a year. He was previously chief of the White House Office of Management and Budget under both Obama from 2010-12 and President Bill Clinton from 1998-2001.

He is expected to be sworn in on Thursday.

Wednesday's vote had a more bipartisan feel that the confirmation of Chuck Hagel a day earlier. Lew managed to garner support from 20 Republicans in the Senate, while Hagel won just four Republican votes following a contentious seven-week process.

His confirmation was stalled by Republican Senators who had questioned Hagel's record on Israel, Iran, defense spending and nuclear weapons. Nevertheless the former Republican Senator and Vietnam War Veteran took the helm at the Pentagon on Wednesday as the new US defense secretary.

He began by giving a speech to military officers and civilian staffers at the Pentagon, where he warned that America could not go it alone.

"We can't dictate to the world. We must engage in the world," Hagel said.

"No nation, as great as America is, can do any of this alone. We need to continue to build on the strong relationships that we have built," he added.