German Chancellor Angela Merkel has called the UK's decision to leave the European Union a watershed for Europe and European unity. It's now up to her and EU leaders to ensure other countries don't follow suit. 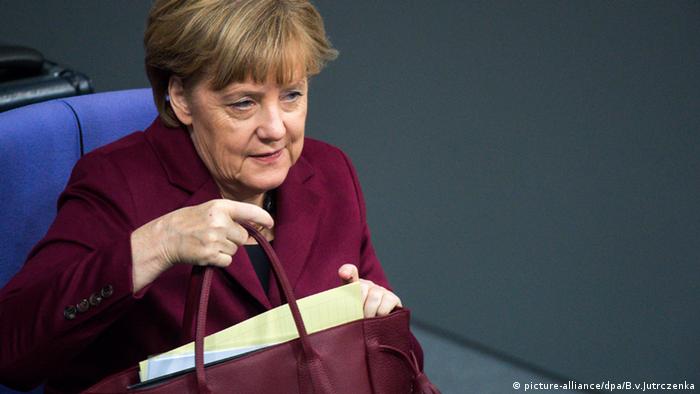 "There's no way around it: Today is a watershed for Europe and the European unity process," Merkel said before urging other EU leaders not to be hasty in their responses to Britain's referendum vote.

As Europe's most powerful leader and the head of Europe's largest economy, Merkel must now lead negotiations on new terms for the UK's relations with the EU, including the access of British companies to the biggest single market in the world.

Speaking to journalists in Berlin, the German chancellor said the EU was strong enough to find the "right answers," adding that the aim of future talks should be to ensure bilateral relations with Britain are "close and based on cooperation."

While other EU chiefs have said the UK must begin the exit process as soon as possible, Merkel made no such appeal. She said she would keep the interests of German citizens and German businesses in mind during any talks.

Merkel and other European leaders must now determine how hard a line they want to take during upcoming Brexit negotiations. On the one hand, too harsh a response would also be a detriment to Britain's European trading partners, while being too soft could embolden other Euroskeptics to call for their own national referenda.

Martin Schulz, the president of the European Parliament and a German social democrat, said he would deliberate with Merkel on "how we can avoid a chain reaction" in which other EU states followed Britain's lead out of the bloc.

"That'll have consequences and I don't believe other countries will be encouraged to follow that dangerous path," Schulz said.

Just over half of British exports go to states within the European Union, according to the Federation of German Industries. As a member of the bloc, Britain has saved its companies billions in exemptions to tariffs and other trade barriers.

Schulz: 'No chain reaction' after Brexit

Germany's powerful industrialists, who had been admonishing Brits not to vote to leave, changed gears and said they hoped a British exit from the EU wouldn't effectuate high trade barriers between the UK and continental Europe.

"No one should be interested in making international trade more expensive with tariffs between Great Britain and the mainland," said Matthias Wissmann, the president of the German Association of the Automobile Industry (VDA).

Germany's major car companies also weighed in. BMW said in a statement it was "clear that a new phase of uncertainty has begun." But it added that it didn't expect any immediate impact on its operations in Great Britain.

Volkswagen also said it was too early to speculate as to the effect a Brexit would have on its business in the UK. "We are well positioned to adapt to the changing economic and political conditions," the company said in an e-mailed statement.

The results of Thursday's landmark referendum showed 52 percent of Brits voting to leave the EU, a decision that sent the British pound tumbling to its lowest level in decades and stoked uncertainty over the future of the UK economy.

German Finance Minister Wolfgang Schäuble, a fiscal hawk who is also a staunch supporter of the European project, stayed pragmatic while saying he would have preferred to see a different outcome.

"Now we have to look forward and deal with this situation," he said. "The procedures for an exit from the European Union are clearly defined and will be applied."

But it was Sigmar Gabriel, Germany's vice chancellor and economics minister, who seemed to sum up the mood in Berlin best after it became clear that the Leave campaign had won enough votes.

"Damn! A bad day for Europe," he wrote on Twitter.

Though unlikely, there is a chance British lawmakers could ignore the results of the Brexit referendum and not begin talks on how the UK would leave the European Union. Here's what's likely to happen next in the EU. (24.06.2016)

Counting continues, but the mathematical point of no return has been reached. British voters elect to leave the European Union in a referendum. If the UK does indeed leave, it will be the first country to exit the EU. (24.06.2016)