US armor brigade unloads in Europe to deter Russia

Hundreds of US tanks and vehicles attached to an armored brigade have arrived in Germany on their way to Poland. The deployment of a third US combat brigade signals Washington's commitment to NATO's eastern flank. 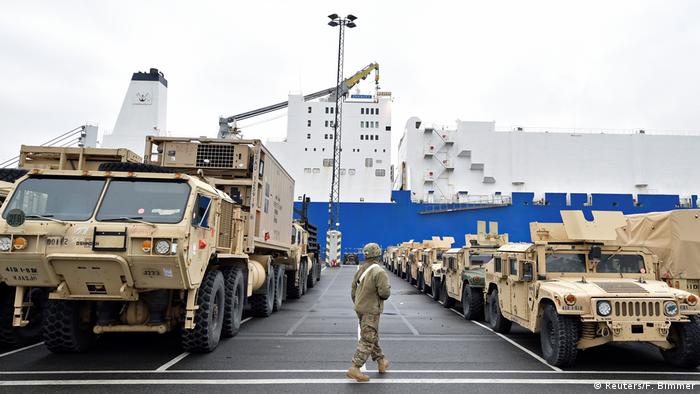 The US military continued on Sunday to unload hundreds of tanks, trucks and equipment at the northern German port of Bremerhaven as part of a build-up to deter Russia and reassure NATO allies on the eastern flank.

"Let me be clear: This is one part of our efforts to deter Russian aggression, ensure the territorial integrity of our allies and maintain a Europe that is whole, free, prosperous, and at peace," US Air Force Lieutenant General Tim Ray, deputy commander of US European Command, said in prepared remarks in Bremerhaven.

The first pieces of equipment from the 3rd Armored Brigade Combat Team, 4th Infantry Division rolled off boats in Bremerhaven on Friday, while combat troops started to arrive over the weekend in Poland.

The US late last year announced it would send a third combat brigade to Europe, pre-positioning supplies and equipment and bringing in troops in back-to-back nine month rotations.

Bremerhaven is a central logistic point from where the equipment will be brought to staging areas and headquarters in Poland. In the beginning of February, the units will be distributed from Poland across the region, including the Baltic countries, Romania and Bulgaria.  One armor regiment will also be based in Grafenwöhr, Germany, for training and maintenance.

The US military and NATO said they were seeking to boost inter-operability and combat readiness to be able to quickly respond to renewed threats following Russia's 2014 annexation of Crimea and Moscow's hybrid warfare in eastern Ukraine.

NATO members Lithuania, Estonia and Latvia - each with large ethnic Russian minorities - are particularly worried Russia could intervene directly or indirectly in their countries as Moscow did in Ukraine. The deployment comes less than two weeks before Donald Trump takes over the White House as US president. His friendly comments towards Russia and questioning of NATO have caused concern among NATO members in eastern Europe.

Germany, Canada and Britain are also sending a rotating battalion each to Estonia, Latvia and Lithuania.

Ray said the armor combat brigade deployment was only a part of a larger deterrent force that included equipment in "space, cyberspace, the air and sea." He added that the nearly 70,000 US troops in Europe were adapting to new strategic realities, including Russian aggression, migration and Islamic radicalism.

The 3rd Armored Brigade Combat Team will participate in several training missions with NATO allies, including the large Saber Guardian 17 NATO exercise in July in the Black Sea region.  It will be replaced by a new brigade next September.

Hundreds of US tanks, trucks arrive for NATO mission in Europe

A shipment of US tanks, howitzers and other military equipment has arrived in Germany as part of a mission to allay concerns about Russian aggression. The cargo will be moved to eastern Europe in the next few weeks. (06.01.2017)