Latvia is facing a form of warfare from Russia that weapons can't win. But the problem it's facing is increasingly affecting the rest of Europe as well. 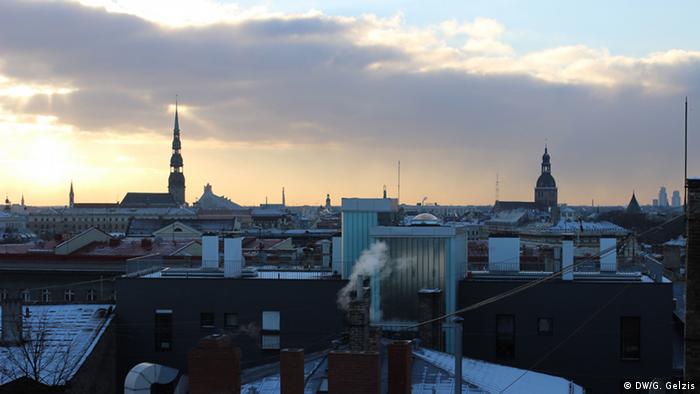 Latvian Foreign Minister Edgars Rinkevics wants to put to rest all the speculation that his country will be the setting for a military showdown between NATO and Moscow.

Latvia has just passed a healthy increase for military spending, which survived a 20-hour parliamentary budget debate uncontested and is to boost the percentage of GDP spent on defense to the NATO-mandated 2 percent by 2018. There will be a thousand more international troops here in the spring as part of a Canadian-led NATO battlegroup, and a couple of hundred American paratroopers are training in the Latvian woods in case a Russian boot steps over the border.

But Rinkevics knows those military security blankets can't keep his population completely safe. Information - or, rather, disinformation - is the most dangerous ammunition being used by Russian President Vladimir Putin against Latvia and its neighbors, and no iron shield can stop it. Rinkevics admits this threat is "much higher on my security agenda" than any weapons system, calling it "propaganda warfare against our values."

"We will see definitely see attempts by Russia to test the new [US] administration," he said, expecting the same challenge to new governments that will be elected next year in European countries including France, Germany and the Netherlands.

Recent US assessments that Russian hackers - at the very least - participated in the leak of private data and spread of false information ahead of the 8 November presidential vote have raised alarm as to whether voting systems themselves can be hijacked. That's just one possibility in this escalating type of "hybrid warfare" that Rinkevics says Latvia has faced for longer than many other countries. "This is something [to which] I would say we are all equally exposed," Rinkevics added, "be it Germany, be it Belgium, be it United States or Latvia or the Baltic States at large."

The European Parliament has just approved a proposal calling on the EU to dramatically upscale its efforts to fight back in the information war, blaming "third parties" for trying to engineer a "strategic split between the European Union and its North American partners ... discrediting the EU institutions and trans-Atlantic partnerships ... and undermining and eroding the European narrative based on democratic values, human rights and the rule of law." Russia is mentioned specifically and in detail as employing a "subversive campaign" against the bloc, a campaign in which it invests heavily.

According to Latvia's State Secretary of Defense Janis Garisons, the pro-Russian propaganda onslaught continues to be "very dangerous" as an effort to undermine the will of the people to support their government. Without strategies in place to combat it, he said, all the upgrades in military readiness are worthless. "When your society or your people lose will or trust in their country, in willingness to protect values," he explained, you can be beaten "without a battle."

To provide deeper research into these hybrid attacks, Latvia set up a "Strategic Communications Center of Excellence" in 2014 that was accredited by NATO later that year. Here, experts analyze the nature and source of threats from all third parties, feeding back information and advice to the 28 NATO governments and the various military headquarters.

Center expert Antti Sillanpää said this work became more important every day both for society and those who protect it. "The future of warfare will have more and more of this informational factor," he explained in Riga. "There are more reasons why [enemies] would use information rather than just killing people, because that's not their final aim. The final aim is to change behavior, and that's why affecting people's minds is so important."

Garisons says the rest of Europe, and now even the US, is just waking up to the kind of pressure his country has suffered since it broke away from Soviet occupation. He said that, with a 25-year head start, Latvia already knew it has to work on this from the perspective of educating its public to weed out lies.

Atlantic Council Senior Fellow Ben Nimmo, who analyzes Kremlin disinformation campaigns, says Estonia, Latvia and Lithuania will always merit special attention from Moscow.  He said one factor was that they had shown great success since regaining independence in 1991 - "and the Kremlin really hates that" - and that their membership in the European Union and NATO gave them a big say in Europe's relationship with Moscow.

"They've consistently pushed for the EU to take a hard line on Russian energy companies. They've pushed for NATO to reinforce them since Russia annexed Crimea in 2014," Nimmo noted. "So it's not just that they're an example to other former Soviet states; they're actually a challenge to Moscow's position and Moscow's influence in Europe."

In other words, the Baltics need to continue preparations for battle.

Merkel has said Russia may try to influence German elections through cyber attacks and a disinformation campaign. Analysts say Russia's objective is to destabilize and highlight faultlines within Germany and the EU. (08.11.2016)

The hack of Russia’s Foreign Ministry website is just the latest attack in an ongoing information war between Moscow and Washington. Experts warn this is the new face of war in the 21st century. (24.10.2016)

Russian hackers suspected behind cyberattacks on US media

Hackers with ties to Russia are thought to be behind a series of recent cyberattacks on US media outlets, including "The New York Times." Cyber vulnerabilities have become something of a crisis in the US government. (24.08.2016)