Trump confirms more US troops will be sent to Poland

The US troop presence in Poland will expand by 1,000, in addition to the 4,500 soldiers rotating through the country. The contingent could be enlarged by moving soldiers currently stationed in Germany. 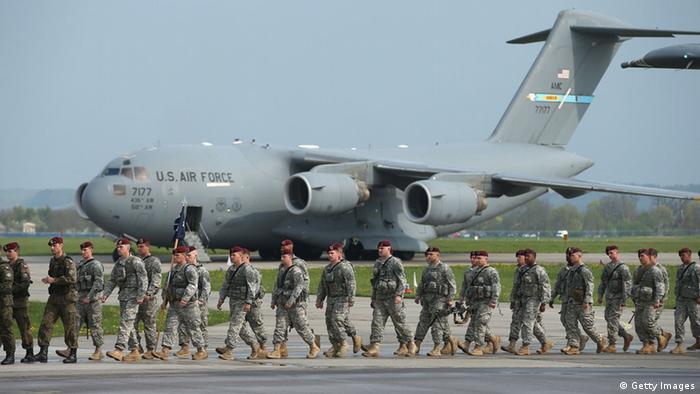 The United States will likely move troops to Poland from other bases in Europe, President Donald Trump said Monday as he signed a defense deal with his Polish counterpart, Andrzej Duda.

Meeting on the sidelines of the US General Assembly in New York, the two leaders signed a Joint Declaration on Advancing Defense Cooperation that builds on a framework deal reached in June.

The United States currently has 4,500 rotational troops in Poland. That number is "expected to grow by approximately 1,000 additional United States military personnel in the near term," according to the joint declaration.

Trump said the new troops would "most likely" be transferred from other European bases.

The United States has about 35,000 troops stationed in Germany. In June, Trump suggested additional soldiers to be sent to Poland could be pulled from Germany, which the president has repeatedly criticized over NATO defense spending targets.

According to the joint declaration, six sites in Poland have been identified for enhancement to host US troops and the two sides are in talks to find a location for an armored brigade combat team.

Poland is "going to be building us facilities that I'm sure are going to be very beautiful," Trump said. "They'll be bearing the entire expense."

Trump claimed the enhanced US military presence is not to counter Russia, whose annexation of Crimea and involvement in the war in eastern Ukraine caused jitters in NATO member Poland.