Towering over Germany: A refreshing trip to the Zugspitze mountain

For those missing the sensation of being above or amid the clouds, a trip to the Zugspitze mountain in southern Germany could be a refreshing summer escape. But COVID-19 restrictions also apply at this historic site. 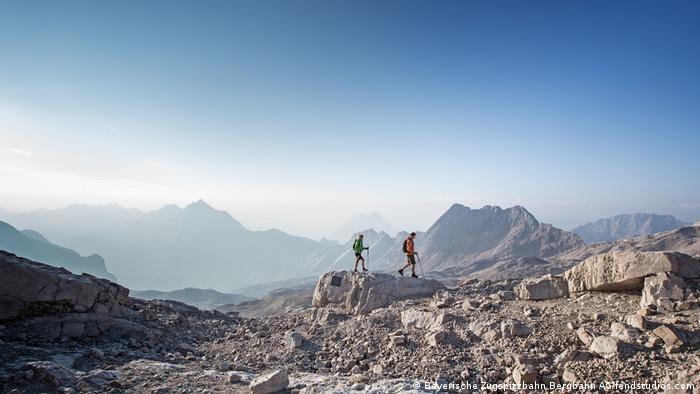 Most of us are far from getting anywhere near the clouds in the midst of the COVID-19 pandemic. To be among those who get to go on airplanes, piercing the sky, floating in mid-air and touching the cumuli is a rare sensation in 2020.

But there are different ways to climb to new heights and to see our planet from different perspectives. With international travel largely being a no-go this year, many people have taken to exploring beautiful spots in their home countries instead.

Germans in particular have extended the perimeters of their staycations to sites within the country — from the North Sea to the Alps.

In the company of gentle giants

To many of the uninitiated travelers to Bavaria, there's a perception that Germany pretty much ends abruptly at the southern city of Munich. But there's a whole world to discover as you travel further south into the mountains — with one particular peak famously marking Germany's highest mountain: the Zugspitze.

At 2,962 meters (9,718 feet) above sea level, the Zugspitze is still a somewhat manageable peak compared to its sisters in neighboring Austria, Switzerland and France, where the mountains can reach from 3,500 meters to more than 4,800 meters. Yet if there is one mountain you should know about in Germany, it certainly is the Zugspitze — although there is plenty to choose from. 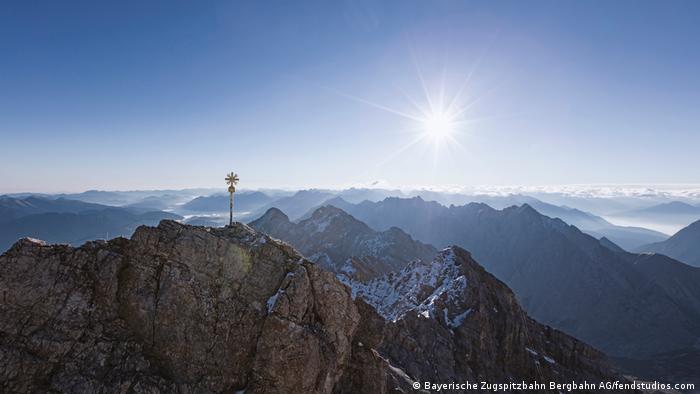 People have always been drawn to the Zugspitze, Germany's tallest mountain

Located just outside the resort town of Garmisch-Partenkirchen, the legendary peak has always been a popular attraction for visitors; but amid scorching summer temperatures searing above 35 degrees Celsius (95 degrees Fahrenheit) in many parts of Germany, the Zugspitze has more recently become a sought-after spot to cool down at high altitudes.

Floating among the clouds and fog

Each year, well over half a million visitors normally come to the tourist site known as "the top of Germany" to find themselves hanging suspended somewhere between heaven and earth. While the figures for 2020 won't be in for some time — as the summer travel season continues — there isn't any lack of demand, as queues often form around the corner at various ticket booths, especially on clear days. 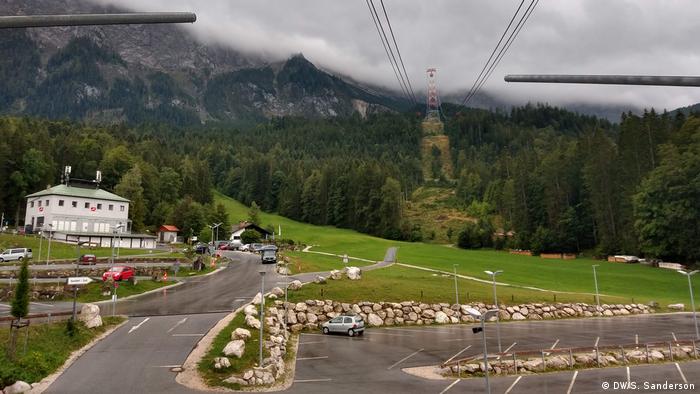 When the Zugspitze hides behind the clouds, you're in for a magical experience

But even when the sun prefers to hide behind the clouds, people come to visit Germany's tallest mountain, not knowing that they will barely be able to see their own shadow up on top. This is where the real magic happens; sure, it is impressive to enjoy vistas on top of the Zuspitze that can sometimes stretch to well over 100 kilometers (60 miles), but if you have any appreciation for the unknown and the mysterious, there is nothing that beats a little hike up in the clouds at a special place like this.

Regina Müller, a furloughed customer service expert from the travel industry, traveled up the Zugspitze in late August. She told DW that regardless of the weather, the Zugspitze is one of those places in Bavaria one simply must see, even when one cannot "see" a whole lot.

"I really wanted to take the toboggan ride but I could barely see anything ahead, and I obviously wasn’t going to risk my life. Still, I really enjoyed being up there despite the limited views."

Even in the middle of the German summer, you get to stick your feet into the snow here, enjoy boozy mulled wine specialties while soaking in the otherworldly atmosphere of being that much closer to the sky. While winter temperatures at the Zugspitze can drop as low as -30 degrees Celsius (-22 degrees Fahrenheit), a typical August afternoon will allow you to take it leisurely at about 7 Celsius (45 Fahrenheit). 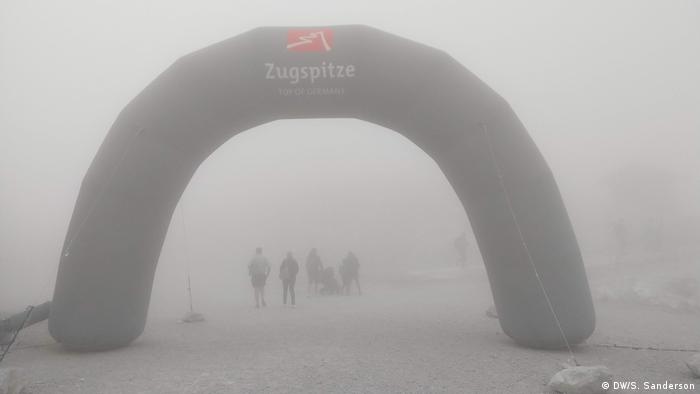 "Summer" in the Alps: you should rather wear your boots if you don't want your sneakers to be soaked

Sure, you may not want to wear shorts — but a day spent on the Zugspitze in July or August is not exactly like hell freezing over with permafrost. That said, even in summer, the weather has on occasion been known to dip below the point of freezing; after all, there are three permanent glaciers located around the Zugspitze. So whatever experience you get, you can be sure that it is going to be unique.

Witnessing four seasons in a day as you approach the summit traveling up from the valley is actually quite a special thrill in its own right. Little details that can be overlooked under the thick blanket of snow in the winter become wondrous miracles to discover — like seeing where the tree line ends, giving way to the alpine tundra, or how the stunning Eibsee lake below becomes lost in plain sight as you pierce through the fog and the clouds.

What goes up must come down again

Yes, you can experience all this wonderment while hiking up the mountain if you wish to do so, but preferably with the help of an expert guide. There are three different routes to get up the mountain, with each uphill climb likely to take up to six or seven hours, depending on your experience and fitness levels. However, it is indeed a dangerous undertaking: people have tumbled into their deaths trying to reach the mountaintop.

For those among us, who like to take things a bit more leisurely, there are two more common ways to get there: Since 2017, a new cable car easily connects visitors with the mountaintop plateau in about ten minutes. 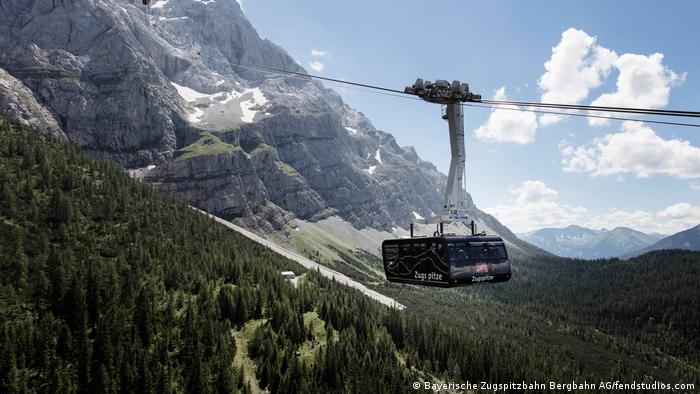 The cable car takes about 10 minutes to reach the summit

There is also the more leisurely and old-worldly way of taking a cogwheel train that travels up the slopes of the mountain and eventually journeys through a tunnel for 4.5 kilometers before reaching its destination. This takes a little over an hour but is worth the time investment.

Read more: Building an igloo on the Zugspitze

And since what goes up must come down again, the best way to do things might just be to buy a round-trip ticket that takes you up the one way and down the other. Even so, you should probably plan a leisurely day to explore the Zugspitze — especially if you are travelling from further afield like from the city of Munich or the Austrian tourist towns of Innsbruck and Salzburg. 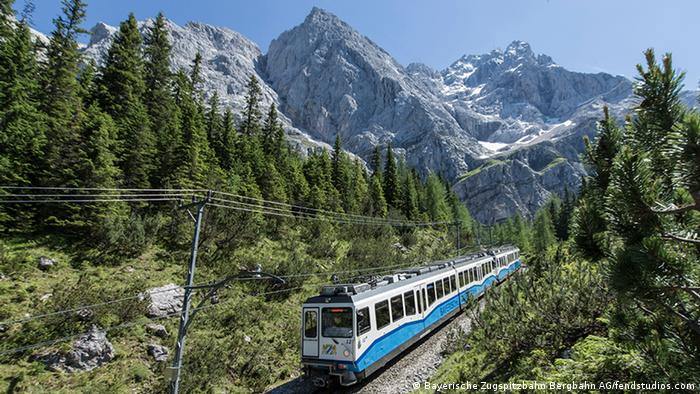 The cogwheel train celebrates its 90th birthday in 2020

The tourism losses of the COVID-19 pandemic aside, 2020 is an important year for the Zugspitze. Not only does it mark the 90th anniversary of the initial opening of the cogwheel train, making Germany's highest peak accessible for mass tourism for the very first time, but it also is the 200th anniversary of the first occasion on which it was successfully climbed.

On 27, August 1820, surveyor Josef Naus reached the top of the mountain with an assistant and a mountain guide. Sent by Bavarian King Maximilian I. Joseph, his job was to chart out the borders of the then-Kingdom of Bavaria in dizzying heights.

But celebrating this 200-year anniversary isn't an easy task in the year of surgical face masks and toilet-paper hoarding: such round numbers tend to attract disproportionate numbers of visitors, whose COVID-19 social distancing skills may not always be on point. 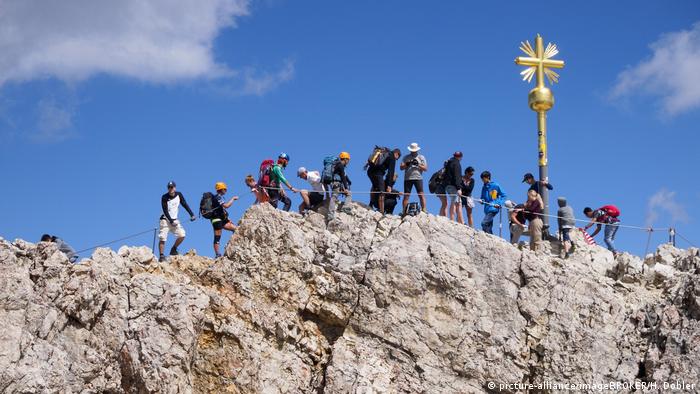 Due to social distancing guidelines, only 3,000 people are allowed on the Zugspitze daily in the summer of 2020

While two centuries ago, those three mountaineering pioneers who reached the summit after an arduous daylong climb were the only people there, it is becoming increasingly impossible nowadays to enjoy a moment of solitude and quiet on top of the Zugspitze — or even on the way there.

On certain summer weekends earlier in August this year, local authorities had to make sure that police officers were present to control the numbers of people reaching the region at large. Some locals living at the foot of the mountain even protested against the high numbers of visitors on August 8, blocking certain roads and access ways for hours on end — only to be met by a growing backlog of visitors later on. 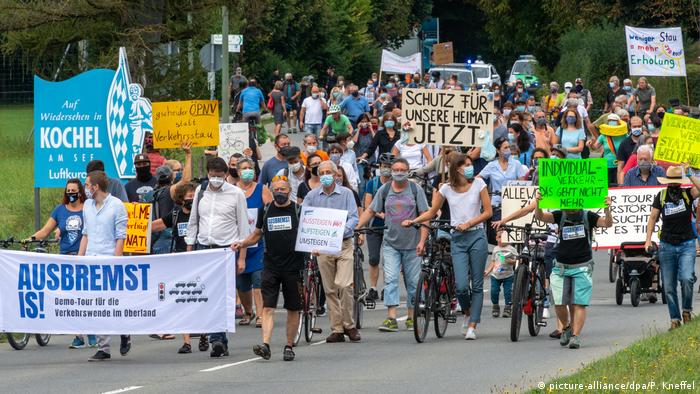 But with school holidays coming to an end across the country, visitor numbers appear to be getting more manageable once more. Regina Müller says that being able to enjoy "such a unique and beautiful spot during such trying times is a real gift in any case. Perhaps you have to be a little more careful, but in my own experience, I had no problems at all."

The history of the Zugspitze has always been marred in controversy: when the cogwheel train was first being built in the late 1920s, several thousand locals protested against the project, wanting to protect their giant neighbor from industrial over-tourism.

In 1930, when the train had its maiden journey, only about 13,000 visitors made use of the shortcut to the summit. Last year, the numbers were pushing 600,000. About 20 million journeys up the Zugspitze in total show that the call of the mountain continues to attract people. 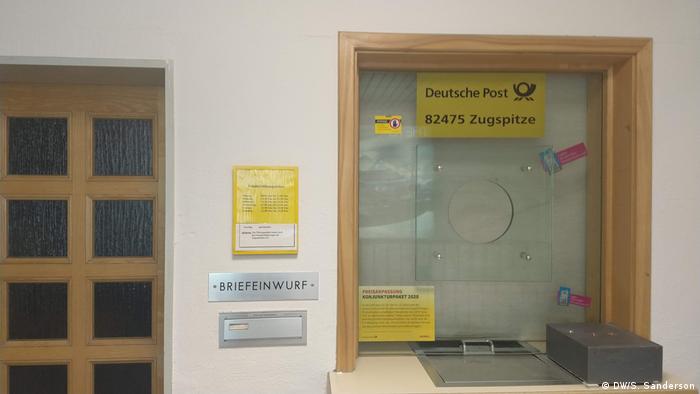 The opening hours may be limited, but there's a full-service post office on top of the Zugspitze

There are plenty of things to do up on the mountain top other than enjoying Bavarian schnapps and sausages at the canteen; you can send parcels from Germany's most remote post-office; you can work as a meteorologist at the weather station; you can ski down various slopes in the mountain region in winter; you can make use of the chapel to get married: you can take a separate funicular to cross borders and actually descend into Austria, and you can even enjoy the occasional live music event up there — like when in late 2014, British pop musician Ed Sheeran gave a concert on top of the Zugspitze.

Even the Dalai Lama has been to the Zugspitze, trading in Mount Everest for Germany's tallest mountain. And if anyone knows about the draw of such majestic mountains, it is the exiled Tibetan leader. However, in 2020, a global pandemic might just get a little in the way of perhaps being too impulsive and adventurous up there. As long as you plan your journey ahead, you will still be in for a stunning experience regardless the circumstances.

Regina Müller sums up the current mood on the Zugspitze — by counting her blessings: "Regardless of the weather, taking a trip up the Zugspitze is a wonderful distraction from all those existential thoughts we're all dealing with at the moment." 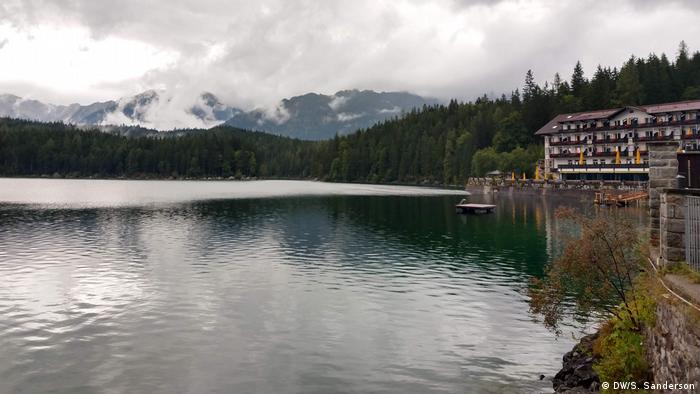 And if you can't make it up to the top of the mountain, the Eibsee lake at the bottom is just as inviting

24 hours on the Zugspitze

Skiing, taking in the view and the rays and sleeping in an igloo. On the Zugspitze, Nicole Frölich tries out Germany's only glacier ski area.