Building an igloo on the Zugspitze

On Germany's highest mountain guests can check into an igloo like in a hotel - or build one themselves, like DW reporter Tankred Gugisch. He tells us how. 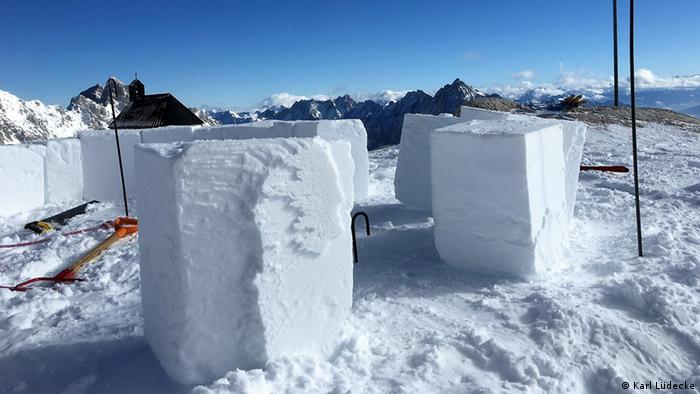 Since doing things in pairs is double the fun, I take my son Scott along with me as I venture up the Zugspitze. "Yes, we’ll be going again in a minute" the conductor barks at us. But where there's a will, there's not always a way. It's 11 a.m. on a Saturday, the Eibsee cable car is full to bursting, the windows are steamed up and this doesn't feel like much of a holiday. But 10 minutes later that's all changed. The Zugspitze welcomes us with wonderful weather. Just in time, the clouds part. Looking over the white peak we have a clear view of Austria, and can see as far as Italy and Switzerland.

A little later Scott and we have reached the igloo village on the Zugspitze Plateau, a little way down the mountain. The village is rebuilt each winter as a hotel for paying customers. Next to the hotel complex - which comprises a big restaurant and numerous igloos connected by a tunnel system - we're to build our own igloo in classical, Inuit style. It's to stand alone, off to the side, and function as a romantic hideaway. Later guests will be able to book this "Love Nest". A huge block of snow as tall as a garage already stands waiting to be measured and cut into smaller building blocks. 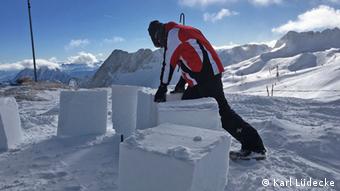 Mix a bit of sun with a lot of snow: the perfect recipe for a good time.

I'm not ready to perform such manual labor quite yet, as the air up here is pretty thin. At an elevation of 2700 meters, it’s hard to catch your breath. So I’m glad when Jan Wernet saves me by coming and introducing himself. The friendly head of the igloo village also introduces his two experienced helpers: Wolfgang Rainer and Michael Elstner. Then he tells us the plan for the day: We're all going to build an igloo together so Scott and I can learn how it's done.

The Building Materials and Location

Everything hinges on the snow, something we'll need plenty of. To transform the white powder into stable building blocks, professionals like Jan and his architect Wolfgang employ a heavy duty snow blower. In no time it blows the snow into a casing while packing it down, too. Time and gravity take care of the rest. The snow becomes firmly packed.

Those without a snow blower have to rely on muscle power and Mother Nature. If enough snow has fallen and it’s good packing snow, you can use the "supply" that's already on the ground. Then you just need to stamp it down and cut it into the right shape. 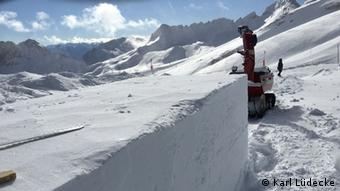 Things are shaping up: The right snow is essential.

Choosing the right spot for your igloo is also important. A block of snow can easily weigh 30 kilograms, so the distance between the place the blocks are stored and the igloo construction site should be as short as possible. Our location is every igloo architect's dream. We're building it on a hilltop, our snow depot is close at hand and the surrounding mountainside is idyllic. All that makes the work a lot of fun.

At the start, a stick in the ground marks the center point of our future dwelling; all the calculations are made using a simple string attached to it. The size of the interior, the igloo's shape and, later, the incline of the dome roof can all be measured using this turnable string on a stick. It's vital to make sure the stick itself doesn't move, though.

Building an Igloo is hard work

One by one we heave the blocks of snow into place. They're each up to 80 cm long, with a depth and breadth of around 30 cm. Our boss Jan has cut them out of the packed snow using a chainsaw. Wolfgang painstakingly fits the blocks in to form the igloo's walls. To make them circular, the edges of the blocks are beveled using a snow saw. Any little gaps that remain are filled in with snow, from both inside and out - just the job for Scott and me! 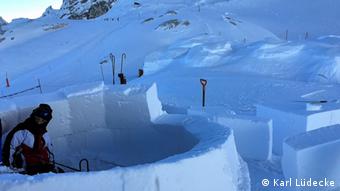 Surprise! No way out- unless you have a shovel.

But the big surprise comes after we've laid the second layer of blocks. They're already angled inwards slightly when Wolfgang takes his saw and - destroys all our work! Well, at least part of it. Starting with the top block he takes the saw and starts cutting around the outside of the igloo in a spiral shape until he reaches the bottom. Barely half of the last block remains. It's a sad sight. But we realize that the destruction was a necessary evil to improve the igloo's stability.

So it continued, layer by layer - fitting in blocks of snow and then trimming them in a spiral motion - until only a small hole remained in the roof. By the time the final block was set into the roof and brought into shape from the inside darkness had already fallen. Making the entrance - which was also the exit for the igloo's interior designer Wolfgang - required digging through the snow, and this way only done late at night.

We'd like to have spent the night in our igloo. In the end it was stable and a sight to behold! The next day the igloo was polished up both inside and out, to make sure that no water could seep in. The guests who book the "Love Nest" should be pleased. And love birds can make their booking right away by contacting: Iglu-Dorf auf der Zugspitze. It costs between 259 and 299 euros per person to spend the night here. 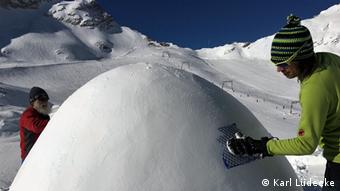 It's all gone smoothly! Our contribution was small, but we're still proud of it.

If you want to build your own "Love Nest," just call the igloo village hotline, or go online and book a course. It's especially enjoyable when you take some friends along. You can also do so elsewhere in the Alps, in the igloo villages in the Swiss resorts of Engelberg and Zermatt, for instance - although it's a bit pricier there. Cheaper courses are on offer in the Allgäu region in Germany and the Austrian state of Styria. And, of course, if you really want to save money, there's always your own backyard - providing there's enough snow there to get started.

Still, Scott and I are glad that we’ve been given a place for the night in one of the hotel's finished igloos, along with the hot beef broth and cheese fondue included in the price. We enjoy the food with the other guests in the restaurant-bar - a monster igloo that must easily accommodate 50 people. A long tunnel leads from here to the various rooms. And so, in an igloo with a room temperature of 0 degrees Celsius, we drift off to sleep, warm as toast in the extreme weather sleeping bags provided to us.

Germany in Winter - a trip through the 16 federal states