Germany's former foreign minister discussed politics, sports, retirement and the trans-Atlantic relationship with the basketball legend in a special one-on-one discussion in Berlin. 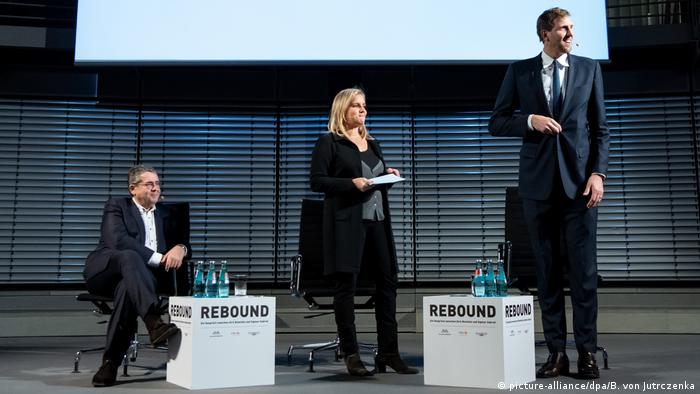 What do one of the NBA's most decorated players and Germany's former foreign minister have in common?

In troubled times, a commitment to the trans-Atlantic relationship and new beginnings, both agreed at the aptly named Rebound event Wednesday evening in Berlin hosted by the Atlantik-Brücke think tank, ING and German newspaper Tagesspiegel.

In a 90-minute one-on-one talk about basketball, politics and everything in between, the German-born retired NBA star Dirk Nowitzki and former Foreign Minister Sigmar Gabriel called for an end to the cynicism and a return to common ground in the relationship between Europe and the United States.

Read more: Trump against everyone. Everyone against Trump?

"Nowadays you could almost believe that we live in two different worlds. ... Almost everyone compares all Americans to their president," Gabriel said.

"But we stand closer than any other region in the world," he added. "In the world of tomorrow, we'll need cooperation with the Americans."

The odd pairing comes into clearer focus with a look at the men's biographies. The 41-year-old, Würzburg-born Nowitzki spent the past two decades in the United States as the Dallas Mavericks' all-star power forward. Recently retired, he's widely considered the league's most successful European import and was decorated on Wednesday with Germany's highest tribute for service to the nation, the Order of Merit.

Gabriel also retired last month, after three decades in German politics. Following an all-star career as one of the country's foremost political personalities, he accepted a position as chairman of Atlantik-Brücke, a nonprofit organization promoting German-American relations.

The men both said that decades atop their respective fields had showed them the value of professional diversity and time with family.

Nowitzki will focus on his two Dallas-based charities and trying his hand at hobbies long brushed aside. Gabriel is dedicating his time to academia and policy work. He remains a senior fellow at Harvard's Center for European Studies and advises the Eurasia Group think tank on European policy.

Now on the sidelines, Nowitzki said he found inspiration in the ability of basketball's superstars to "put their egos aside" and "place the success of the team above all else."

That's often a more difficult task In the political arena, Gabriel said. Politics has always focused on larger-than-life personalities, but "personal attacks, the hostility — that was certainly not as bad," he added. "Aggression and irreconcilability have increased."

Such aggression was on display at NATO's 70th anniversary summit in London this week. An event meant to celebrate the solidity of the defense bloc instead showcased ideological splits between European and American leaders.

In a tense exchange with French President Emmanuel Macron, Donald Trump chastised Europeans, and especially Germany, for their continued failures to meet a target of each member state spending 2% of gross domestic product on defense.

At the end of the first day of meetings in London, Macron was seen jesting with Canadian Prime Minister Justin Trudeau and UK Prime Minster Boris Johnson about Trump's pontifications.

"That's the problem with politics sometimes," Gabriel. "Too often it's all about who's right."

Sparring between erstwhile partners is more the rule than the exception nowadays, but there's still much to be optimistic about, Gabriel said.

Both Gabriel and Nowitzki said Americans continued to cherish their country's ties to Germany, even though 64% of Germans view the trans-Atlantic relationship as either bad or very bad, according to a survey released last month by the Körber Foundation.

"Normally the feedback that I get [about Germany] is always very, very positive," said Nowitzki, who considers himself as much American as he is German. "Friends in the US are almost like family. ... They aren't as superficial as everyone thinks."

The key to ending the cynicism and reviving the trans-Atlantic relationship is to realize that, though leaders of nations may change their priorities, the most important factor in democratic societies is the people, Gabriel said.

That's why atypical ambassadors such as Nowitzki, whom Gabriel called "an inspiration," are becoming even more important for showing that feuding friends are still friends all the same.

"In our country, we need to become clearer about what connects us," Gabriel said. "The trans-Atlantic relationship won't remain strong by itself."