It has been two months since Dirk Nowitzki walked away from the basketball court after a glittering 21-year NBA career. The 41-year-old is now spending time with his family and doing things he could never do before. Dirk Nowitzki has jumped over so many opponents and won so many rebounds during his NBA career, but the German had less success finding a way through a closed off section of the motorway near Frankfurt early on Wednesday morning.

It wasn't that long ago that Nowitzki would have had help to find another route, or avoided the whole thing by taking a helicopter instead of a private car. Elite players are so important to teams that such annoyances don't feature. However, such luxuries are a thing of the past for Nowitzki.

The 41-year-old has been a man of leisure since mid-April. A sporting pensioner, Nowitzki is playing in his annual "Champions for Charity" football game at Leverkusen's stadium on July 21, which means arriving 30 minutes late isn't really a problem.

Nowitzki: 'The pressure is gone'

This too is a new part of Nowitzki's reality. After 21 years of skill, heart and record-breaking performances, the German is now happy that "the pressure is gone." As a result, he's happy to embrace everyday banalities.

Nowitzki now finds himself enjoying a life that he never really knew. He was the "German Wunderkind" who, with the help of his mentor Holger Geschwindner, fine-tuned his basketball skill every hour of the day during his youth. "I'm happy to do things now that I didn't do before," Nowitzki said.

The superstar was keen to first put some distance between himself and his glorious sporting past, and to open himself up to a new, unknown life. He has to take a breath and work through his unique and long career. 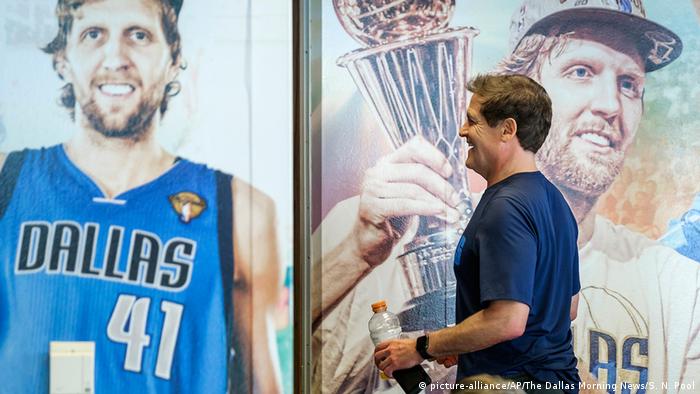 There might never have been a player in NBA history given as heartfelt a departure as Nowitzki. The likes of Michael Jordan, Charles Barkley and Kareem Abdul-Jabbar were revered by fans, but Nowitzki was loved. Whether it was for his incredible sporting performances, or his authenticity or his down-to-earthness, Nowitzki was special. Not everyone can handle so much devotion.

Nowitzki is back on the road. This time though, he's not traveling across the US for endless league games. Instead, he's spending time with his family. With his wife, Jessica Olsson, and his daughter and two sons, Nowitzki has been to Disney Land in Florida and his hometown of Würzburg, where his remarkable story started.

In winter, Nowitzki plans to ski and snowboard again. "I've also never been to Oktoberfest in Munich," Nowitzki said. Nowitzki is catching up on all the things that he wasn't able to do during his playing days because it wouldn't have been good for his career. "I'd like to celebrate Christmas back home with my parents in Würzburg again," he said. "I haven't done that in a long time."

Nowitzki has also enjoyed as much fast food in the two months since his retirement than perhaps ever before in his life. The diet he had in place for years, one that he even strictly followed during his holidays, now plays no role whatsoever. "One or two suits don't fit anymore," Nowitzki said with a broad smile. He has put on a bit of weight, five kilograms apparently, but it doesn't seem to bother him at all. "I haven't done a workout in the last two months, nothing at all."

Nowitzki has no intention of staying in Germany, though. He wants to return to Dallas. That's where his life is, and he wants to and likely will return to the Mavericks. In what role? "I don't know, time will tell," Nowitzki said, adding that right now he hasn't got any space left to think about it. He also can't see himself taking up a role with the German national team. "I'm just not here enough to have enough influence," Nowitzki said. The focus at the moment is on his family - everything else isn't as important right now.

Nowitzki is enjoying his new daily routine and is getting used to daily life without sport, even if he's still in the midst of processing all that has happened. Dallas owner Mark Cuban wants to build a statue of Nowitzki in front of the American Airlines Center. The street in front of the multi-purpose arena is also supposed to be named after the German. At least there, it's unlikely that Nowitzki will find himself held up by traffic or roadworks.

Bill Russell remembered as one of the greatest on and off the court 01.08.2022

The NBA's most prolific champion and first Black coach died Sunday at 88. Tributes poured in from the White House and basketball legends.

Daniel Theis is just the third German to play in the NBA Finals. The center, whose Boston Celtics are facing the Golden State Warriors for the title, is a team player capable of playing an important role when needed.