Opinion: Trump against everyone. Everyone against Trump? | Business | Economy and finance news from a German perspective | DW | 01.06.2018

A transatlantic trade war is taking shape. But one thing is clear: Donald Trump won't rest until he gets his way. His opponents will have to join together — yet that doesn't seem likely, says Henrik Böhme. 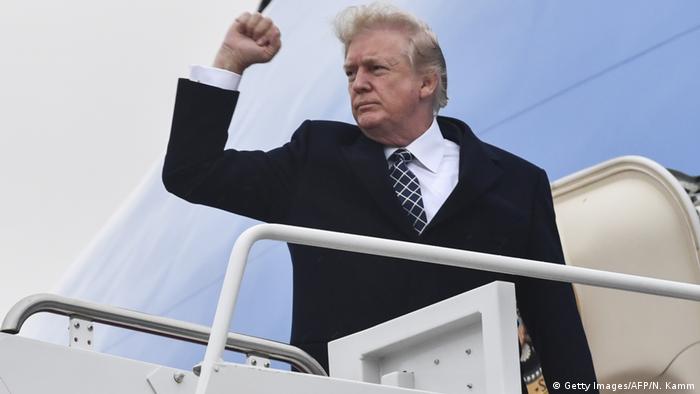 Donald Trump will only be happy when no Mercedes cars rolled on Fifth Avenue in New York. If this report that first appeared in the German business weekly Wirtschaftswoche is correct, then one thing should be clear to everyone — this man is serious.

He thrashes out and gets into fights with everything and everyone. This president has his hands in all the hot spots of the world — whether in the Middle Eastern countries Syria and Iran or in North Korea. To even think about taking on these trouble spots, he would need allies. But he keeps alienating them one by one.

But back to the trade war. After all, we've always suspected that all the Mercedes on New York's Fifth Avenue are actually a threat to US national security. Even though Trump's Secretary of Commerce Wilbur Ross has a few weeks left to check on that, he'll surely come to exactly that conclusion. After all, steel and aluminum imported from Europe must be such a risk, otherwise Trump could not simply pass over Congress and impose punitive tariffs at will.

But seriously, if Americans want to drive a Mercedes, Porsche or Audi, will Trump forbid them? And if the Europeans finally lower the tariffs on US car imports — which are in fact much higher than in the other direction — and even then the Europeans don't buy American, what then?

Will only those with a sticker in their passport proving they have a Chevrolet be allowed to enter the US?

Since Germany is debating driving bans at the moment, perhaps this would also be an idea to appease Donald Trump: A driving ban for Mercedes on Fifth Avenue?

The situation is still manageable

Of course, there is a big fuss because the Americans have taken off the gloves. Rantings and warnings have flown, yet no one knows what's next. But just for clarification, punitive tariffs on European steel are nothing new. George Bush tried to do the same thing at the beginning of the new millennium — but it turned into a huge disaster.

And since there is the impression that the entire transatlantic trade is coming to a complete standstill, it is important to be clear that at the moment we are only talking about one and a half percent of the total trade between Europe and the US. The first reactions from European steel manufacturers also show that the situation is manageable, even with the extra customs duties on top.

But in the end the punitive tariffs are in force and European retaliations are being put together — and retaliations for retaliations. This continual raising of the stakes is what makes this situation so dangerous. What is needed are clear answers and clear positions. Europe must speak with one voice, but it won't.

Since export giant Germany will most likely be the hardest hit, it is not interested in supporting Brussels and is pulling its own line.

A significant number of Europeans would actually be happy to see the unloved Germans (hello Italy, we hear you!) get what they deserve. The Chinese could become a new partner, but they are in their own trade war with the Americans. Nonetheless, even more products stamped "Made in China" will land on Europe's relatively open markets as a consequence, because America wants less of it. What will Europe do? Raise import duties on Chinese products?

Of course, it would be good if everyone who is affected by the American president's sudden policy changes rallied together. But just the opposite now looks to be the case. Everyone will try to limit the damage as much as possible for themselves.

It could also be a big moment for the World Trade Organization (WTO), but they are fighting for their own survival.

Like many international organizations, the WTO stands for multilateralism, but Trump stands for the opposite. WTO rules do not interest him. So no, this is not the hour of common action, even though it is desperately needed. For the moment, the motto can only be "close your eyes and hope for the best." When Trump has finally completed his work, hopefully enough substance will be left to build something new.