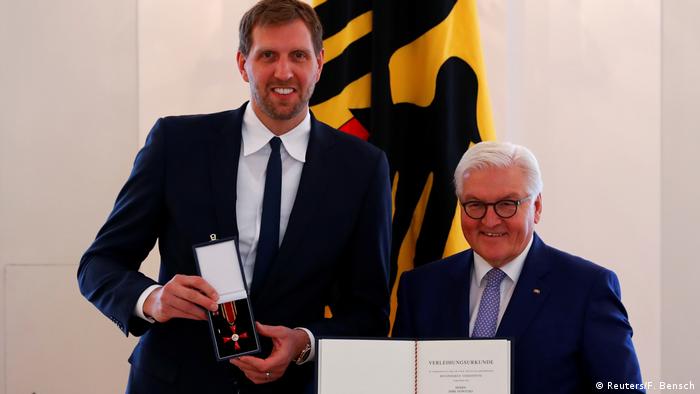 German President Frank-Walter Steinmeier bestowed German basketball star Dirk Nowitzki with the Order of Merit of the Federal Republic of Germany on Wednesday.

The former Dallas Mavericks forward was honored in the German capital's Bellevue Palace along with 23 others for their commitment to community service.

The Order of Merit is the highest tribute Germany can pay to individuals for services to the nation.

The 41-year-old Nowitzki, who retired from professional basketball earlier this year, works as a UNICEF ambassador for socially-deprived children and against malnutrition. In 2001, he founded the Dirk Nowitzki foundation, a charity aimed at fighting poverty in Africa.

Nowitzki is one of the most successful German athletes ever. His 31,560 points in the NBA is the sixth-highest mark in history. He was named the NBA's Most Valuable Player in 2007 and won the NBA title in 2011.

His career exploits prompted the city of Dallas, Texas to name a street after him.

Opinion: Dirk Nowitzki – a legend both on and off the court

After 21 seasons in the NBA, basketball superstar Dirk Nowitzki has announced his retirement from the game. There will never be another like him, writes DW's Andreas Sten-Ziemons. (10.04.2019)

It has been two months since Dirk Nowitzki walked away from the basketball court after a glittering 20-year NBA career. The 41-year-old is now spending time with his family and doing things he could never do before. (03.07.2019)