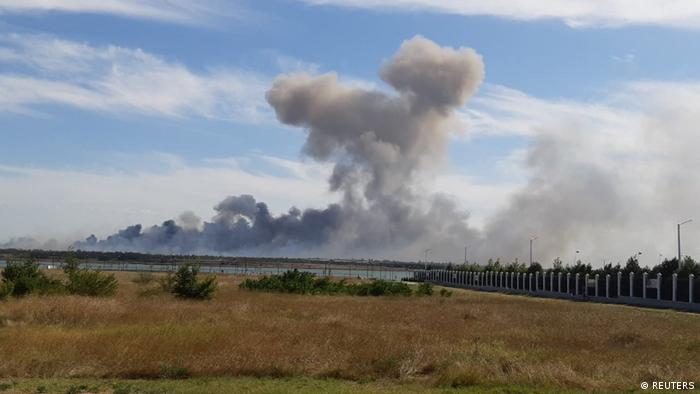 Explosions and plumes of smoke were reported at a Russian military air base in Novofedorivka, Crimea

Several major explosions took place in an area near a Russian military air base in Moscow-annexed Crimea, local officials confirmed on Tuesday. Kyiv has denied responsibility for the incident.

The blasts took place in the town of Novofedorivka, which is also a popular tourist destination. Images and video shared on social media show plumes of black smoke rising from the site. Emergency crews rushed to the scene.

One person was killed, according to the regional leader of Crimea, while the region's top health official said five people, including a child, had been injured.

Russsia's defense ministry denied reports that there had been an attack, saying the blasts were caused by the detonation of aviation ammunition.

The Russian governor of Crimea, Sergei Aksyonov, said in a post on Telegram that he was traveling to the area and that the "circumstances are being clarified."

A close aide to Ukrainian President Volodomyr Zelenskyy denied responsibility for the explosion, telling TV Rain: "What would we have to do with this?"

Russian troops annexed Crimea in 2014 in a move not recognized by most other countries. The peninsula, however, has been largely spared from the intense shelling seen in other areas of eastern and southern Ukraine since Russia invaded the country at the end of February.

In his Tuesday night address after the explosions, Zelenskyy the Black Sea "cannot be safe as long as Crimea is occupied."

"This Russian war against Ukraine and against the entire free Europe began with Crimea and must end with Crimea — with its liberation," he added.

Here are the other main headlines from the war in Ukraine on August 9.

Latvia asks to join case against Russia at European court

The Latvian government has formally requested to be granted third-party status in Ukraine's case against Russia at the European Court of Human Rights (ECHR).

In June, the Strasbourg-based court said it had registered Kyiv's request to establish a case against alleged human rights violations committed by Russia in Ukraine.

Latvia's Foreign Ministry said it was the first time that Riga requested to intervene as a third party in an ongoing international judicial case, noting that the measure was only used "in very rare circumstances."

Riga has already opened a criminal probe into alleged Russian war crimes in Ukraine, citing Latvian crimes against laws that have no territorial limitations.

Ukrainian refugees are told when arriving in Latvia about their right to testify about what they witnessed during the war. Dozens of refugees have exercised this right, and Riga recognized two Ukrainian citizens as victims.

US to send Ukraine $89 million to clear landmines

The US State Department announced that Washington would provide Ukraine with $89 million (€87.1 million) to support 100 demining teams.

The money would also go toward training and equipping Ukrainian forces to undertake the dangerous job of defusing mines across some 16 million hectares of land that Ukraine's government said were mined by Russia.

"Russia's unlawful and unprovoked further invasion of Ukraine has littered massive swaths of the country with landmines, unexploded ordnance, and improvised explosive devices," the State Department said in a statement.

"These explosive hazards block access to fertile farmland, delay reconstruction efforts, prevent displaced communities from returning to their homes, and continue to kill and maim innocent Ukrainian civilians," it added.

According to the State Department, Kyiv has already defused around 160,000 mines, but nearly 5 million Ukrainians still inhabit areas thought to be mined by the Russians.

Training to remove landmines in Ukraine

The supply of Russian oil via the Druzhba pipeline through Ukraine was halted, Russia's Transneft pipeline company said on Tuesday.

Transneft, which is controlled by the Russian state, said the Ukrainian side halted the oil transport due to payment problems. Prior to the war, Ukrainian authorities required Russia to prepay for pumping oil across Ukrainian territory via the pipeline.

Payments from Transneft, however, have been rejected as a result of EU sanctions on Moscow over the invasion.

Oil deliveries to Germany, Poland and Belarus were continuing "as usual," the company said.

Ukrainian officials did not immediately confirm the oil supply shutdown.

The Kremlin sharply criticized an appeal from Ukrainian President Volodymyr Zelenskyy for an international travel ban on all Russian nationals.

"The irrationality of the thought process exceeds every measure," he added, according to Russia's Interfax news agency.

In an interview with the Washington Post, Zelenskyy argued that tougher measures by Western countries are needed to increase pressure on Russian President Vladimir Putin over the war.

He told the paper "the most important sanctions are to close the borders — because the Russians are taking away someone else's land."

More ships carrying grain have left Ukrainian ports, as slow progress continues on easing shipments of vital food supplies that had been blocked due to the war.

"Two ships left the port of Chornomorsk carrying a total of 70,000 tons of agricultural products," Ukraine's Infrastructure Ministry said in a statement on social media.

One of the ships is headed to Turkey, while another is bound for South Korea.

Ukraine is one of the world's biggest grain producers, but exports had been halted due to a Russian naval blockade and extensive mining by Ukrainian forces.

The official website of the Finnish Parliament has been left inaccessible through a Denial-of-Service (DoS) attack.

Finnish public broadcaster Yle reported that a Russian hacker syndicate claimed responsibility for the attack through a post on their Telegram channel. According to Yle, the group has also been behind cyberattacks on state institutions on Poland, Lithuania and Norway.

"We decided to make a 'friendly' visit to neighboring Finland, whose authorities are so eager to join NATO," Yle cited the group as saying.

Finland's Parliament tweeted that it was working alongside service providers and the National Cyber Security Center in order to restore the website.

Russia's Foreign Ministry has suggested it could support a visit by International Atomic Energy Agency (IAEA) monitors to the nuclear plant in Zaporizhzhia in southern Ukraine.

"From our side, we are ready to provide the maximum possible assistance to resolve organizational issues," the ministry said.

Russia also accused the UN of having canceled an inspection trip that was already planned.

Ukrainian energy agency Energoatom said that parts of the facility were "extremely vulnerable" after the site was shelled, with Ukraine and Russia trading accusations for the attack. Energoatom chief Petro Kotin told Reuters that the risks of the shelling causing a nuclear disaster were "very high," and accused Russia of aiming to sever the plant from Ukraine's power grid and connecting it to the Russian system.

UN Secretary-General Antonio Guterres earlier demanded that international investigators be given access to the site, and the IAEA said that safety measures had been "violated" by occupying Russian forces.

Ukraine said it has evacuated at least 3,000 people from the eastern region of Donetsk over the last six days.

The Ukrainian government said it had launched compulsory evacuations because it does not expect to be able to provide it with heat during winter.

Tymoshenko said that since February around 1.3 million people have been evacuated from the Donetsk region.

Since Russian forces occupied a Ukraine nuclear power plant in March, the situation has deteriorated and the site has reportedly been shelled, raising concerns of a catastrophe. Experts say that the Zaporizhzhia nuclear power plant — Europe's biggest — is "extremely vulnerable" to meltdown.

The outbreak of the war in Ukraine was met with an outpouring of humanitarian support from volunteers across Germany. But how strong is the solidarity with the refugees after almost six months of war?

The Ukrainian military hit strategic bridges on the Dnieper River and Russian bases in Russian-held Kherson, delivering a blow to key infrastructure in the region and forcing Moscow to rethink its supply lines.