Five facts on grain and the war in Ukraine

The dispute over millions of tons of grain stuck in Ukraine could finally be over after the country reached an agreement with Russia to resume exports. What does that mean for the world? 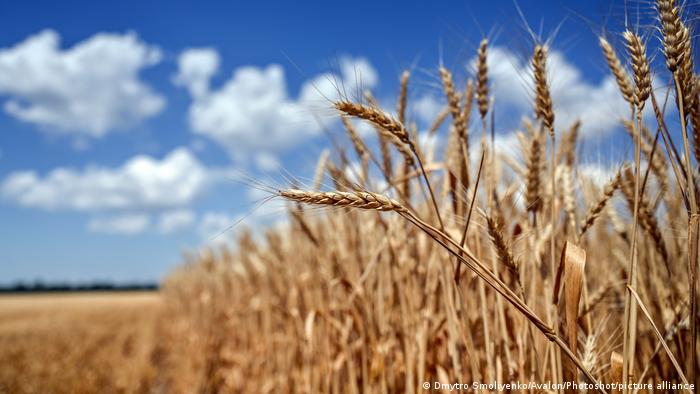 What role does Ukraine play in global food security?

Ukraine is one of the world's major grain producers. The country mainly grows and exports  wheat, corn and barley. According to the European Commission, Ukraine accounts for 10% of the world wheat market, 15% of the corn market, and 13% of the barley market. With more than 50% of world trade, it is also the main player on the sunflower oil market.

Ranked in first and second place respectively, corn and wheat are also the world's most widely grown cereals. A major exporter like Ukraine dropping out can have serious consequences for global food security.

Who are the largest producers of wheat, corn and barley?

According to statistics by the US Department of Agriculture, Ukraine was the world's seventh largest producer of wheat in 2021/22 with 33 million tons. Only Australia, the US, Russia, India and China produced more — with the EU actually ranked in first place if you count the union's member states together.

Ukraine ranks sixth on the corn market. From mid-2021 to mid-2022, only Argentina, the EU, Brazil, China and especially the US grew more corn. The most barley is grown in the EU, followed by Australia, Russia and Ukraine.

Who mainly imports these grains?

The largest wheat importers in 2020, according to the Observatory of Economic Complexity (OEC), a visualization site for international trade data, were Egypt ($5.2 billion, or €5.1 billion), China ($3.47 billion), Turkey ($2.44 billion), Nigeria ($2.15 billion) and Indonesia ($2.08 billion). Egypt was also the biggest buyer of wheat specifically from Ukraine, the chart shows.

How does Russia's war in Ukraine affect the global grain market?

Grain deliveries were suspended as a result of Russia's blockade of Ukrainian ports, fueling fears of shortages worldwide and price hikes. By mid-May, export prices for wheat and corn had skyrocketed to unprecedented heights. That has had far-reaching consequences particularly inAfrica, the Middle East and Asia, according to the UN, — countries where the coronavirus pandemic and its fallout had already exacerbated the food situation.

In the meantime, the pressure on the grain market has lessened somewhat. The UN's Food and Agriculture Organization (FAO) estimates that, despite the Ukraine war, the 2022 global grain harvest will likely be only marginally smaller than in 2021.  The prospect of the recent agreement between Ukraine and Russia has raised hopes of new Ukrainian grain exports.

What does the agreement between Ukraine and Russia mean?

As part of theagreement reached in Turkey, the 20-25 million tons of grain currently blocked in Ukraine can finally be exported. Exports of Russian grain and fertilizer — restricted as a result of the sanctions against Russia — should also be facilitated.

The agreement also provides for secure corridors in the Black Sea between Ukraine and the Bosporus; ships in the area and ports involved would not be attacked. A control center in Istanbul headed by the United Nations and staffed by representatives from Russia, Ukraine and Turkey are to monitor the grain exports.

The agreement between Ukraine and Russia is important for global food security. The grain is urgently needed on the world market, especially in Asia and Africa. In the wake of Russia's war of aggression in Ukraine, the United Nations had warned of the biggest food crisis in decades.