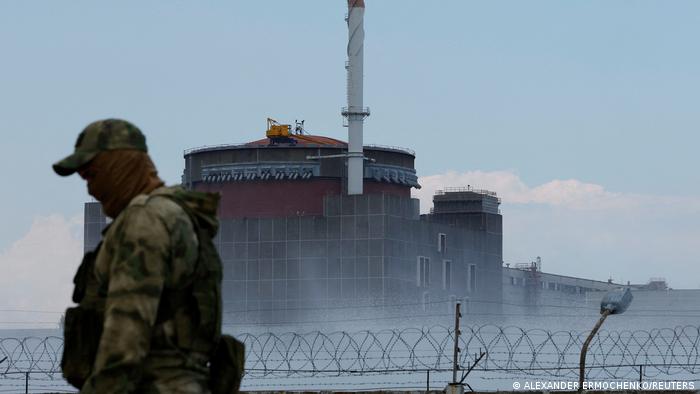 The Zaporizhzhia plant is one of the largest in the world

Ukraine and Russia on Friday pointed fingers at one another over shelling at the Zaporizhzhia nuclear plant.

Located in the city of Enerhodar, Zaporizhzhia has six reactors and generates more than one-fifth of Ukraine's national electricity needs when able to operate as normal. It is also Europe's largest nuclear plant.

"Three strikes were recorded on the site of the plant, near one of the power blocks where the nuclear reactor is located," the energy firm said in a statement.

Energoatom said the plant was still operational and no radioactive discharges had been detected.

Ukraine's Foreign Ministry said the "possible consequences of hitting an operating reactor are equivalent to the use of an atomic bomb." Ukraine said Russia is engaging in "numerous provocations" at the plant.

Ukrainian President Volodymyr Zelenskyy called the shelling of the site "a shameless crime" and "an act of terror." He said the shelling is an argument for "tough sanctions against the entire Russian nuclear industry."

In its daily briefing about the war, British intelligence said actions by Russian forces at the Zaporizhzhia plant are endangering the safety and security of the facility.

Russia has likely deployed artillery in areas adjacent to the plant to target areas on the opposite side of the Dnieper River. They are likely using the plant, which they seized in March, as a nuclear shield.

Rafael Grossi, the head of the International Atomic Energy Agency (IAEA), described the situation in precarious terms during a nonproliferation conference in New York this week.

"All principles of nuclear safety have been violated in one way or another," Grossi said.

Ukrainians prepare for another potential nuclear disaster near Chernobyl

Earlier this week, the IAEA appealed for access to the plant.

Here are the other main headlines from the war in Ukraine on August 5.

Kyiv said two of the ships, the Maltese-flagged "Rojen" and the Turkish "Polarnet" — carrying maize departed from Chornomorsk —  and the Panama-flagged "Navi-Star," all left from Odessa.

"Our main goal is to increase the trans-shipment volume in our ports. We have to process 100 carriers per month to be able to export the necessary amount of foodstuffs," Ukrainian Infrastructure Minister Oleksandr Kubrakov said.

Shipments of grain from Ukraine's ports have restarted following a deal made in July between Russia and Ukraine that was mediated by Turkey under UN auspices.

Already-high food prices have remained at elevated levels for months now amid Russia's invasion of Ukraine, with both Russia and Ukraine being among the world's leading exporters.

Earlier in the week, a ship left Ukraine's port loaded with grain for the first time since February 24, when Russia invaded Ukraine. Twenty million tons of grain remain trapped in ports and storage silos in Ukraine due to the conflict.

Ukrainian Deputy Economy Minister Taras Kachka told The Financial Times that Ukraine would like to see the deal expanded beyond grain.

"What's the difference between grain and iron ore?" Kachka asked.

The Kremlin announced on Friday that it would impose entry bans on dozens of Canadian citizens, after Ottawa sanctioned prominent Russian figures.

Russia's foreign ministry said some of the 62 individuals targeted by the sanctions are known for "their malicious activity in the fight against the 'Russian world' and our traditional values."

The move comes after Canada recently sanctioned the head of the Russian Orthodox Church, Patriarch Kirill. Moscow said Canada is seeking to insult "not only the multinational and multi-confessional people of Russia, but also Orthodox believers around the world, including Canada."

Kiril is a strong supporter of Russian President Vladimir Putin and the invasion of Ukraine.

US Ambassador to the UN Linda Thomas-Greenfield said Friday that Russia's attacks on Ukraine will result in 40 million people around the world becoming food insecure. The African continent will be the hardest hit by the food crisis.

Thomas-Greenfield accused Russia of using hunger as a weapon of war. She noted that African countries need to know who is behind food supply shortages.

Many African countries are reluctant to criticize the invasion of Ukraine, as they engage with trade with Russia.

"Russia has systematically captured some of Ukraine's most productive farmland, spoiling fields with mines and bombs," Thomas-Greenfield said. "Regardless of you feel about Russia, we all have a common interest in mitigating the impact of the war in Ukraine on food security."

The comments come after Daimagüler visited Ukraine with several other German officials.

According to the co-chair of the Federal Association of Sinti and Roma, Daniel Strauß, around 400,000 Romani-speaking people currently live in Ukraine. This comprises 1-1.5% of the population.

"Our researchers have observed Ukrainian forces basing themselves in schools, residential buildings, hospitals in close proximity to where civilians live, which of course endangers those civilians who live in these buildings. Such conduct is in violation of international law and puts civilians at risk," Amnesty's senior crisis adviser, Donatella Rovera, told DW.

Ukrainian President Volodymyr Zelenskyy said Amnesty's report "unfortunately tries to amnesty the terrorist state and shift the responsibility from the aggressor to the victim."

Rovera said Zelenskyy's reaction was "regrettable because I think if he takes a look at Amnesty's website, he will find a very significant body of work, several reports, many more press releases based on our field investigations, where we document extensively and in great detail war crimes and other serious violations of international law by Russian forces, including use of banned weapons, indiscriminate and deliberate strikes on civilians, extrajudicial execution, torture, abductions."

Ukraine said Russian troops have launched a significant offensive in the Donetsk region.

Ukraine's defensive line stretches from the towns of Soledar and Bakhmut, which the Russians are trying to capture to extend their control in Donetsk.

Prior to the war, half a million people resided in this area, which is now heavily militarized.

Ukraine's general staff said fighting near Bakhmut has been inconclusive.

For years, Ukraine has fortified Pisky and seen the town as a defensive ground from which to buffer Russian proxy forces holding the city of Donetsk 10 kilometers (6.2 miles) to the south.

Ukrainian General Oleksiy Hromov said Ukraine retook two villages around the eastern city of Sloviansk but was pushed back to the town of Avdiivka. Ukrainian forces had to abandon a defensive position at a coal mine it considered significant.

In Mykolaiv along the southern front line, regional governor Vitaliy Kim told residents that authorities there are imposing a curfew from 11 p.m. (2000 GMT) Friday night until 5 a.m. Monday but that this did not mean the city was under any particular threat at present.

Mykolaiv is near Russian-occupied parts of Ukraine's Kherson region, where Ukraine has plans to conduct a counter-offensive.

On Telegram, Kim wrote, "The city will be closed for the weekend. Please be understanding. We are also working on collaborators. Districts will undergo checks."

Russian leader Vladimir Putin has signed a decree that prohibits foreign investors from countries it deems unfriendly from selling shares in key strategic businesses and banks through the end of 2022.

The ban is effective immediately and applies to the Sakhalin-1 oil and gas fields in Russia's far east. US oil giant ExxonMobil operates Sakhalin-1 and said this week that it was working on transferring nearly a third of the business to another firm.

Other assets put under this form of hybrid protection include the Sakhalin-2 liquefied natural gas project, Karyaga oil field and several Russian banks, a list of which will be forthcoming from the Central Bank and must meet with Putin's approval.

Numerous foreign banks including Austria's Raiffeisen, Italy's UniCredit and Intesa, and the US bank Citi continue to search for ways to exit the Russian market. Societe Generale and HSBC have already managed to find a way out.

The Bulgarian ambassador was summoned and handed "a ministerial note" that stated "14 staff members of the Bulgarian diplomatic and consular service in Russia were declared personae non gratae."

Sofia accused Russia's diplomats of espionage, and Russia threatened to cut diplomatic relations. Russia has far more people in Bulgaria owing to its size than Bulgaria does in Russia.

Upon expelling the diplomats, the Russian Foreign Ministry said, "We would like to emphasize that the responsibility for the consequences of these counterproductive steps rests entirely with the government of Bulgaria," and accused the country of taking actions that "also testify to the further degradation of the collective West, which is ready to sacrifice the interests of partners in order to harm Russia."

Pope Francis has met with the second most powerful leader in the Russian Orthodox Church, Bishop Anthony. Next month, Pope Francis is expected to meet with Patriarch Kirill, who has been supportive of what Russia has termed "special military operations" in Ukraine.

Anthony's predecessor was ousted in June in an abrupt move that indicated tensions at the top of Moscow's Patriarchate regarding the war in Ukraine.

The Vatican disclosed the meeting by placing it on the list of official appointments but offered no details.

The meeting between Francis and Kirill is likely to occur in Nur-Sultan, the capital of Kazakhstan formerly known as Astana renamed for former president Nursultan Nazarbayev who left office in 2019.

Kirill is considered a close conservative ally of Russian President Vladimir Putin. He supports the war in Ukraine, seeing it as part of a struggle to protect Russian traditionalism against Western decadence.

Kirill's support for the war has caused a rift with the Vatican and caused a schism with several Orthodox churches and the Russian Orthodox Church. Francis has called the Russian invasion "a cruel and senseless war of aggression."

The two had been scheduled to meet in Jerusalem in mid-June, but Francis called that off on the advice of Vatican diplomats.

The two met once before, in 2016 in Cuba. It was the first time a pope and a leader of the Russian Orthodox Church met since the Great Schism of 1054.