A shipment of grain has left Ukraine — the first such cargo since an agreement between Kyiv and Moscow. It's hoped that more will follow. Meanwhile, the US has announced a new weapons package. DW rounds up the latest. 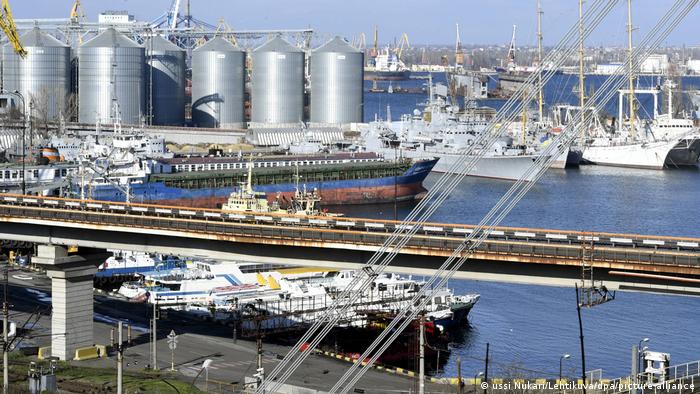 The UN refugee agency reported on Tuesday that the number of border crossings from Ukraine since Russia's invasion on February 24 had reached 10 million.

In 2021, the population of Ukraine was nearly 40 million. Men aged between 18 and 60 are also not permitted to leave the country.

Although an undetermined number of people have also returned to Ukraine in the meantime, the UN said movements back to Ukraine may be "pendular" and "do not necessarily indicate sustainable returns as the situation across Ukraine remains highly volatile and unpredictable."

According to UN data, the majority of the border crossings were into Poland. 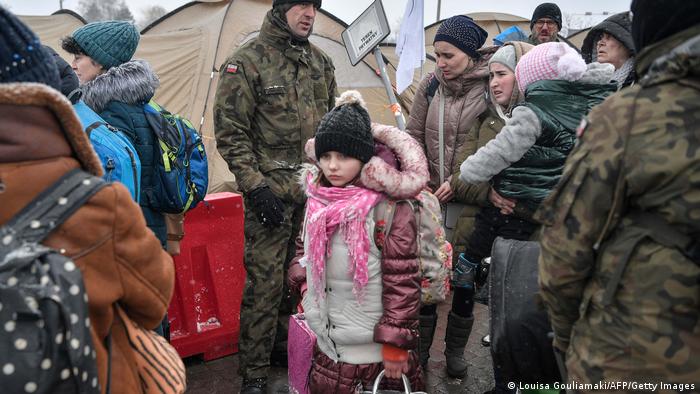 US Secretary of State Antony Blinken says he is "deeply concerned about the fact that Russia has taken over nuclear facilities in Ukraine."

He was speaking to reporters at the United Nations in New York, where leaders are meeting for the 10th review conference of the Treaty on the Non-Proliferation of Nuclear Weapons (NPT).

He said Moscow's forces were using the facility as a military base to fire at Ukrainians "knowing that they can't and won't shoot back because they might accidentally strike a nuclear reactor or highly radioactive waste in storage.''

International Atomic Energy Agency Director General Rafael Grossi told the conference that the situation at the Zaporizhzhya nuclear plant "is becoming more perilous by the day.''

UN Secretary-General Antonio Guterres said the conference was taking place "at a time of nuclear danger not seen since the height of the Cold War.''

Russian President Vladimir Putin did not attend the event, but wrote in a greeting statement to the conference: "We assume that there can be no winners in a nuclear war, and therefore one can never be allowed to start."

The United States has announced $550 million (€536 million) in extra security assistance for Ukraine.

He said the pledge brings the total amount of military assistance the Biden administration has committed to Ukraine to more than $8 billion.

Ukraine gets more rocket systems from US, Germany: minister

According to estimates by experts, Ukraine already operates up to a dozen HIMARS, which have a longer range and are more precise than Ukraine's Soviet-era rocket artillery.

The MARS II MLRS can hit targets at a range of up to 70 kilometers (43 miles) and is designed to destroy troops and equipment, command posts and communications and to lay minefields.

Ukraine has repeatedly asked the West for more long-range artillery as it tries to target Moscow's forces.

Russia has claimed that the West's decision to supply such weapons justifies its attempts to conquer more Ukrainian territory for its own protection.

Martin Frick, the director of the World Food Program in Germany, has welcomed the departure of the first shipment of Ukrainian grain following an agreement that was struck between Moscow and Kyiv last month.

A cargo ship loaded with more than 26,000 tons of corn left the southern Ukrainian port of Odesa on Monday morning bound for Lebanon, according to the UN.

Turkish authorities on Tuesday said the Sierra Leone-flagged Razoni was delayed by bad weather in the Black Sea and would arrive in Istanbul for inspections later than expected, on Wednesday morning.

As part of the UN deal, Russian, Ukrainian, Turkish and UN officials will inspect the ship after it anchors in Istanbul, before it continues to Lebanon.

"This is certainly a beacon of hope to see a ship leaving the port after almost five months," Frick told DW in an interview. "I think it's early to say the crisis is over … but with every ship leaving, I hope that normality will come back."

Both Ukraine and Russia are major exporters of wheat and corn, but shipments from Ukraine had been blocked since the start of Moscow's invasion. That led to significant concerns about food security in some countries in the Middle East and Africa that rely on these grains.

Frick said the number of acutely hungry people around the world had been increasing even before the war started.

"When the war in Ukraine started, this number was skyrocketing. And today we are afraid that 345 million people are acutely threatened by hunger," he said.

He added that 16 vessels that were loaded with grain before the war were waiting at three ports in the southern region of Odesa. He said those ships were expected to depart in the next two weeks, with three additional ships soon to arrive to collect cargo.

"And we think that this number will increase day by day," he said.

NATO Secretary General Jens Stoltenberg also welcomed the shipment and thanked "ally Turkey for its pivotal role" in helping to broker the deal that made it possible.

"NATO allies strongly support the full implementation of the deal to ease the global food crisis caused by Russia's war in Ukraine," he said in a tweet.

The president of the European Commission has told a Spanish newspaper that the energy crisis resulting from the EU's standoff with Russia could get worse.

"Since Russia has already completely or partially cut off gas supplies to 12 member countries (of the EU), we must all prepare for the worst situation," Ursula von der Leyen told El Mundo.

Last week, the bloc agreed on an emergency winter gas plan amid concerns that Moscow could cut off gas supplies completely.

These measures are to "help to meet our winter supply needs," von der Leyen said.

The commission president also welcomed Spain's decision to back the plan after initially opposing it, saying "this is about European solidarity."

It said in a statement that the individuals, including officials, journalists and businesspeople, "contribute to the hostile course of London aimed at the demonisation of our country and its international isolation."

The ministry added that "work on expanding the Russian stop-list will continue."

No debt repayment from today

A debt moratorium that means Ukraine won't have to pay debt or interest on it to G7 creditors until the end of next year comes into effect today.

The German government had suggested the repayment moratorium for Ukraine during its G7 presidency. Leaders agreed the measure at the end of June.

According to experts, Ukraine was already critically indebted before Russia's war of aggression.

Due to the fighting since the end of February, however, large parts of the Ukrainian economy are now also lying idle, which is why the country is also considered financially unstable.

The country currently owes some $130 billion (€127 bilion) in foreign debt.

The European Union has welcomed the departure of a grain shipment from Ukraine but said it is only the "first step" towards easing a global food crisis.

EU spokesman Peter Stano said the bloc still expects the "implementation of the whole deal and resumption of Ukrainian exports to the customers around the world."

Stano accused Russia of blocking the shipments "for months." He noted that Russia had fired missiles at the port of Odesa on the day after the deal was signed.

There was widespread positivity about the first departure of grain from Odesa after the agreement brokered with the help of the United Nations and Turkey.

Ukraine's Minister of Infrastructure Oleksandr Kubrakov tweeted a video of the long cargo ship sounding its horn as its headed out to sea.

"The first grain ship since Russian aggression has left port,'' Kubrakov said on Twitter. He thanked partner countries and the UN for making it possible to implement the agreement signeed in Istanbul. "It's important for us to be one of the guarantors of food security," said the minister.

He added that the vessel, carrying corn to Lebanon, would pass through the Bosphorus on Tuesday, and that Ukraine would look to open up the port of Mykolaiv if the grain deal holds.

Ukraine Foreign Minister Dmytro Kuleba said "Ukraine has always been a reliable partner and will remain one should Russia respect its part of the deal."

The Kremlin also welcomed the departure of the first shipment.

"As for the departure of the first ship, this is very positive. A good opportunity to test the effectiveness of the mechanisms that were agreed during talks in Istanbul," Kremlin spokesman Dmitry Peskov told reporters.

"The Secretary-General hopes that this will be the first of many commercial ships moving in accordance with the initiative signed, and that this will bring much-needed stability and relief to global food security, especially in the most fragile humanitarian contexts," the UN said in a statement.

The German Foreign Office said the restart of grain exports represented a "glimpse of hope" for global food security.

The UK's Ministry of Defence says Russia is likely reallocating a significant number of its forces from the northern Donbas sector to southern Ukraine.

Moscow has probably identified its Zaporizhzhia front as a vulnerable area needing of reinforcement, the ministry said in its daily assessment.

It said Russia had continued to attempt tactical assaults on the Bakhmut axis, northeast of Donetsk, but that it is only managing to make slow progress.

The ministry said Russia was probably adjusting its Donbas offensive after failing to make a decisive operational breakthrough.

The first shipment of Ukrainian grain to be shipped since a deal was struck between Ukraine and Russia left the port of Odesa on Monday morning, bound for Lebanon.

The Sierra Leone-flagged cargo ship Razoni is the first ship to depart in line with an agreement reached with Russia on July 22. A statement from the United Nations said it was carrying more than 26,000 tons of corn.

Other convoys are expected to follow, respecting the maritime corridor and other formalities in line with the deal.

Ukraine and Russia signed the agreement, brokered by the UN and Turkey, which is hoped will see grain exported from three Ukrainian Black Sea ports.

"The ship Razoni has left the port of Odessa bound for Tripoli in Lebanon. It is expected in Istanbul on August 2. It will then continue its journey after it has been inspected in Istanbul," Turkey's Defense Ministry said in a statement on Monday.

Both Ukraine and Russia were key suppliers of staple foods around the world before Russia launched its invasion in February.

After Moscow launched its war, Ukrainian goods became inaccessible because of Russian control of the Black Sea.

More than 20 million tons of grain from last year's harvest is still awaiting export, according to Ukraine.

The International Committee of the Red Cross said it had not yet obtained permission to visit the Olenivka prison where Ukrainian prisoners of war died in a strike on the facility.

Meanwhile, a Russian strike on the Mykolaiv region killed the founder of a large Ukrainian agribusiness. Read these and other updates from Sunday, here.

Platforms such as Instagram, Telegram and Youtube play a key role in documenting Russia's invasion and rallying international support for besieged Ukraine. But they are also used to obscure facts and spread fake news. Read more details here.

With the EU seeking to reduce its gas consumption by at least 15%, Germany's heavy reliance means it will probably have to save even more. DW looks at how that is supposed to work.