With the conclusion of their three-day summit, G7 leaders have agreed to develop a price cap on Russian oil and provide billions in food assistance to avert a hunger crisis caused by the war in Ukraine. 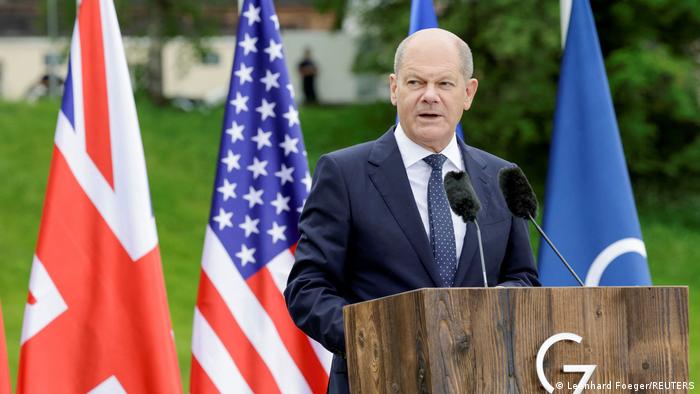 In closing statements at the G7 summit, German Chancellor Olaf Scholz, the summit's host, said that the world's seven leading economies stand together in support of Ukraine and that G7 countries will raise the cost of the war for Russia.

The leaders of the G7 wrapped up the three-day summit Tuesday in the Bavarian Alps with commitments to further pressure Russia over its war in Ukraine, while addressing a looming food crisis caused by blocked food supplies.

Russian President Vladimir Putin "must not win this war," the chancellor said.  "We will continue to keep up and drive up the economic and political costs of this war," he added.  "There is only one way out: for Putin to accept that his plans in Ukraine will not succeed," Scholz said.

"We want Ukraine to be able to defend its sovereignty, independence and future as a democracy," Scholz said. "We support the country in its defense and offer it a perspective for the future," he added.

"The next task is to see to it that this war comes to an end, and Russia withdraws its troops," the chancellor said.

Russia's war in Ukraine is also expected to dominate the NATO summit in Madrid, where most of the G7 leaders will head to from Germany.

Speaking after Chancellor Scholz, French President Emmanuel Macron said that Russia "cannot and should not win" the Ukraine war.

"Right now, it is clear, Russia's attack on Ukraine's territory has one objective — the surrender of Ukraine," said Macron, adding that the G7 would support Ukraine, "as long as necessary, and with the necessary intensity.'' A 'Marshall plan' for Ukraine

Scholz said Germany is working with the European Commission to organize a conference on rebuilding Ukraine after the war.

"We need a Marshall plan for Ukraine, it must also be well planned and developed, that is what we have set out to do," added Scholz, referring to the US-led effort to rebuild Europe after World War II. 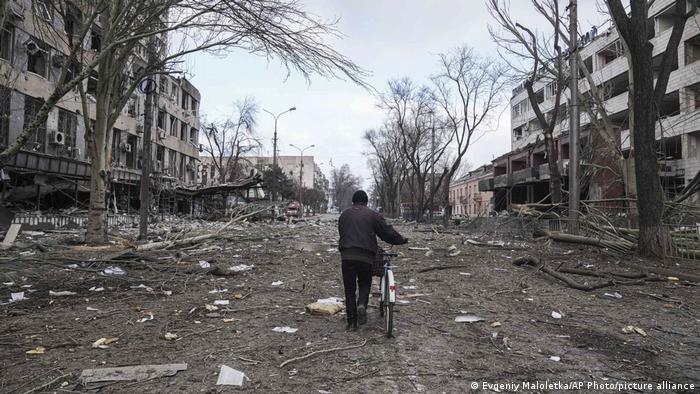 Many cities in Ukraine have been destroyed by Russian bombing, like Mariupol, seen here

US officials, speaking to reporters on condition of anonymity, said that the G7 countries agreed to develop a mechanism to cap prices of Russian oil to lower Moscow's profits from surging oil prices.

Leaders of the G7 will task ministries to "work urgently towards developing, consulting with third countries and the private sector in an effort to develop a price cap around oil," a senior US official said.

"We will explore further measures to prevent Russia from profiting from its war of aggression. As we phase out Russian oil from our domestic markets, we will seek to develop solutions that meet our objectives of reducing Russian revenues from hydrocarbons, and supporting stability in global energy markets," said the final G7 leaders' communique.

German Chancellor Scholz said that implementing the price cap was a very "ambitious and demanding project," which still requires "a lot of work."

Although sanctions have reduced Russian export volumes, Russian revenues climbed in May, according to the International Energy Agency. India and China have also significantly increased their purchases of Russian crude since the war began, giving Moscow an alternative source of revenue and potentially complicating any plan on price caps.

French President Macron said Tuesday he was in favor of capping the price of Russian oil, and that talks on how to technical implementation would commence soon. He added that a wider alliance would be needed to make the cap work.

G7 summit ends with show of unity against Russia

With Ukraine's ports blocked, wheat, sunflower oil, corn is being kept from the global market, increasing overall food prices. Experts and aid groups have warned parts of Africa could soon experience famine as foodstuffs run out.

A US official said the plan involves "support efforts in over 47 countries" to "help save lives through direct humanitarian interventions" and "enhance the resilience and productivity of food systems around the world, particularly in vulnerable regions."

Chancellor Scholz said Germany would be "significantly involved" in providing food aid to countries in need.

"The next few weeks will be crucial," said French President Macron on the crop situation in Ukraine, adding that stocks needed to be freed up before this year's harvest.

German Chancellor Scholz has also pushed for creating a so-called climate club, in which countries that agree on ambitious climate targets become spared from tariffs.

"We need more ambition to achieve our climate targets," Scholz said in his closing statements.

In a joint statement released by Germany Monday, which included five developing guest nations like India and South Africa, leaders emphasized a "clean and just energy transition'' that reduces use of fossil fuels without exacerbating unemployment.

"Climate protection can be a competitive edge and not a drawback," Scholz said.

Ukraine can't bring in its harvest