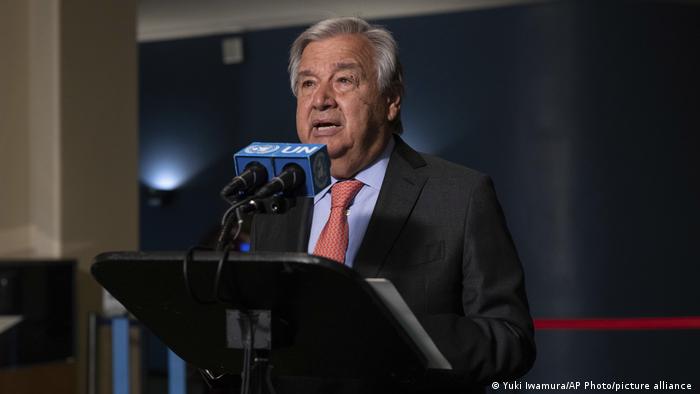 United Nations Secretary-General Antonio Guterres warned that once-unthinkable nuclear conflict is back in the realm of possibility, speaking at the start of a conference in New York.

His warning came as leaders met at the United Nations for the 10th review conference of the Treaty on the Non-Proliferation of Nuclear Weapons (NPT), which came into force in 1970.

"Today, humanity is just one misunderstanding, one miscalculation away from nuclear annihilation," he said.

"The climate crisis, stark inequalities, conflicts and human rights violations, and the personal and economic devastation caused by the COVID-19 pandemic, have put our world under greater stress than it has faced in our lifetimes," Guterres said.

This was occurring "at a time of nuclear danger not seen since the height of the Cold War," he said. "Humanity is in danger of forgetting the lessons forged in the terrifying fires of Hiroshima and Nagasaki," Guterres said.

The war in Ukraine has raised geopolitical tensions to levels not seen since the 1962 Cuban Missile Crisis, Guterres stressed.

What makes the NPT so important right now?

The NPT is a landmark international treaty to prevent the increase of nuclear weapons and to promote cooperation in the peaceful use of nuclear energy.

Under normal circumstances, it is subject to review every five years, but the 10th conference was postponed due to the COVID-19 pandemic.

It comes as concerns are rising about China's rapid uptake of nuclear arsenal and the spread of nuclear technology, especially in Iran and North Korea.

India, Pakistan, Israel and North Korea are not part of the pact that 191 states have signed. All five leading nuclear powers, the United Kingdom, Russia, France, China and the United States are part of the NPT while North Korea withdrew in 2003.

What did other leaders say?

"This goal may seem distant with the current situation the world is in, but we must never lose sight of it," she said.

Germany, alongside 15 other countries, has made 22 proposals for nuclear disarmament.

She insisted that "the global community adhered to international law" and that transparency around any nuclear arsenal had to be of utmost priority.

Yet, "Russia's brutal war of aggression" was a clear sign that "nuclear weapons are a bitter reality," she said. "The commitment to nuclear nonproliferation and nuclear deterrence are no contradiction in these times."

Japan's Prime Minister Fumio Kishida urged all nuclear states to conduct themselves "responsibly" in nonproliferation efforts at a time when he said the road to a world without nuclear arms had become much more difficult.

Baerbock: 'The NPT is not just a piece of paper'

What was said about Russia's war in Ukraine?

Russian President Vladimir Putin said there could be no winners in a nuclear war and no such war should ever be started, addressing the participants of the 10th NPT conference in a letter.

Since then, Russia's nuclear forces have been put on high alert.

The United States, France and Britain criticized Putin's threats of nuclear weapon use amid Russia's invasion of Ukraine.

"Following Russia's unprovoked and unlawful war of aggression against Ukraine, we call on Russia to cease its irresponsible and dangerous nuclear rhetoric and behavior, to uphold its international commitments," they said in a statement.

"Nuclear weapons, for as long as they exist, should serve defensive purposes, deter aggression, and prevent war. We condemn those who would use or threaten to use nuclear weapons for military coercion, intimidation, and blackmail," the statement read.

Russia should demonstrate its willingness to renew a separate bilateral nuclear arms reduction pact, the New START Treaty, when it expires in 2026, US President Biden said in a separate statement.

"But negotiation requires a willing partner operating in good faith. And Russia's brutal and unprovoked aggression in Ukraine has shattered peace in Europe and constitutes an attack on fundamental tenets of international order."

Progess towards a world without nuclear weapons has stalled for years. A month-long UN conference on nuclear non-proliferation aims to kickstart it as Russia's war in Ukraine stirs fears of nuclear confrontation.

The measure now goes for a vote before the UN General Assembly, probably sometime in early December. A majority of members may vote to support the resolution but Security Council members are expected to block it.