The Halle synagogue attack underscores what is downplayed: the threat against Jews is here and always has been. DW’s Kyra Levine, a US-born Jew living in Berlin, says Germany must lead the fight against anti-Semitism. 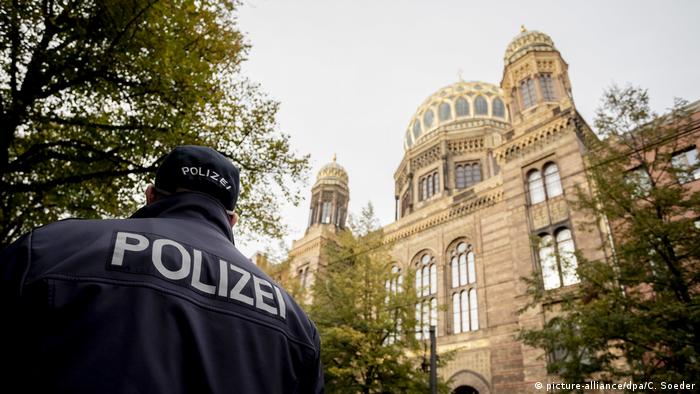 When news broke of the thwarted attack on a synagogue in Germany yesterday, I was reminded of the words of Dr. Martin Luther King, Jr: "Injustice anywhere is a threat to justice everywhere ... Whatever affects one directly, affects all indirectly." Similarly, anti-Semitism anywhere is a threat to religious freedoms everywhere. But its startling resurgence has largely fallen on deaf ears worldwide.

Jews who do not walk around with a kippah or a Star of David may not realize the full extent of the problem, either. Recently Jewish children have been bullied in schools and a rabbi was attacked on a street — and 12 Jews were murdered in two synagogue shootings in my home country, the US, in the last year. Still, like many others, I have been tempted to dismiss them as terrible but isolated incidents. Because I, a Jewish person not immediately recognizable as one, have felt safe in my everyday life.

But after Halle, I realize: I was wrong.

In 2017, 78% of Jews in Germany felt under increasing threat, and the number of attacks against Jews in Germany rose 10% to 1,646 incidents from 2017 and 2018. But attacks on synagogues have occurred numerous times since the Holocaust, and anti-Semitic attitudes persist widely.

In 2013, I served as a guest in the Jewish Museum Berlin's exhibition "The Whole Truth: Everything You Always Wanted to Know About Jews." In an unusual display, various Jewish persons sat in an open display case, responding to visitors' questions and comments.

I was floored at the profound lack of awareness about Judaism — I was asked, for example, if I was circumcised (I was born biologically female, so no); others demanded I religiously justify Israel's politics (I'm Jewish, not a citizen of or expert on the state of Israel).

Though the Holocaust ended in 1945, the ignorance and repulsive attitudes that fueled it were quietly handed down to further generations. In 2017, more than half of German 14-to-16-year-olds surveyed had no idea what happened at Auschwitz. Nearly one in seven adults were similarly unable to say what it was or what happened there. Holocaust denial is a crime in Germany, but the country has failed to adequately educate all who live here about the horrors of the past.

Only in 2019 did Berlin adopt the first-ever state plan to combat anti-Semitism. What about the rest of the states, and the federal government? It took the German government nearly 80 years to appoint an anti-Semitism commissioner — and when one was appointed in 2018, he was not Jewish. With due respect to Dr. Felix Klein, who has considerable experience with Jewish communities at home and abroad, how is a person without the specific life experience of being Jewish in Germany supposed to address the threats Jews face every day? In May, he warned that Jews in Germany should not wear religious symbols such as kippahs in public. How is that helpful? And what is Germany going to do about it?

Religious intolerance — anti-Semitism, Islamophobia, or any other form — will not be rooted out until every single person in Germany is aware of why it is unacceptable and the genocide it led to. Because of its history, Germany must lead the way in this regard. The mass murder of millions of Jews and many other groups has been endlessly documented. If anyone is unaware of these undeniable facts, shame on us all for not sufficiently and systematically educating younger generations about it.

The importance of Yom Kippur can hardly be overstated; secular Jews like myself come out of the woodwork for this day. We contemplate who we have hurt in the past year, how we can make amends and be a mensch — that wonderful German and Yiddish word we use for a righteous human. This year, I spent it reporting on an attack that shakes me to my core. Judaism asks parents to help our children understand our faith, traditions and history — to bring them to the synagogue as a place for learning. For the first time, yesterday, I was terrified to do just that.