Anti-Semitism on the rise? Western European Jews think so | Europe | News and current affairs from around the continent | DW | 31.07.2018

European Jews increasingly feel under threat. Now researchers looked into a possible connection between an increase in immigration from Muslim majority countries and a rise in anti-Semitism in Western Europe. 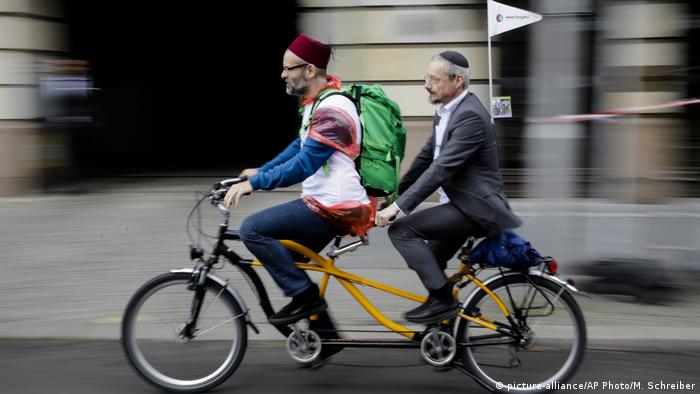 The report entitled "Antisemitism and Immigration in Western Europe Today: Is there a connection?" presented findings and recommendations from a 2016-17 project involving five separate national reports from Belgium, France, Germany, the Netherlands and the United Kingdom. The research was commissioned by the Berlin-based "Remembrance, Responsibility and Future" Foundation (EVZ) and led by the Pears Institute for the study of Antisemitism, Birkbeck, University of London.

The study examined various indicators of societal change, including increased immigration from predominantly Muslim countries in the MENA region (Middle East and North Africa). However, rather than measuring the number of anti-Semitic verbal or physical attacks, the team of researchers measured perceptions of anti-Semitism held by individuals from various religious, social and ethnic groups.

Notably, the report's findings indicated rising fear among Jews in every country studied. In Germany, for instance, 78 percent of German Jews noticed an increasing threat, according to a 2017 study.

Just shy of half (48 percent) of the readers of the Dutch Jewish weekly Nieuw Israelitisch Weekblad said last year they were concerned about security and anti-Semitism. In 2016, about two out of three (63 percent) French Jews had the impression that there was "a lot" of anti-Jewish sentiment in their country. In fact, Jewish people in France take the threat so seriously that quite a few have left: while about 1,900 French Jews emigrated to Israel in 2012, the number rose to 7,800 in 2015 and fell to 5,000 a year later — still more than double the number just a few years earlier.

Belgian Jews are also worried, with authorities in Brussels advising people in more than one case to no longer publicly show their religious affiliation. Jewish parents have also increasingly warned their children not to wear the Star of David since the 2014 Israel-Gaza conflict.

Fear and concern a 'cross-border phenomenon'

While the question mark in the title indicates that the study's authors are far from being alarmist, the 13 researchers who studied anti-Semitic phenomena in the above-mentioned countries did come to an alarming conclusion: fear and concern among Jews in Western Europe are a "cross-border phenomenon."

The EVZ researchers were cautious, however, when addressing the question of how far these feelings are related to immigration from MENA countries. They said the surveys they evaluated portrayed the current MENA migrants as a "current or potential source of anti-Semitism," but the team made it clear that "opinion polls have different results depending on the questions asked."

Read more: How should Germany deal with anti-Semitism among Muslims?

However, the authors of the study spoke of "tendencies" noticeable in the surveys from the five Western European countries. "If we look at the tendencies in the number of anti-Semitic incidents recorded, we see that in all five countries the Second Intifada, which began in October 2000 and lasted until February 2005, represented a significant turning point. Since 2000, certain events in Israel, Gaza and the occupied territories have repeatedly provoked reactions in Western Europe, including anti-Semitic incidents."

According to the study, anti-Semitism is not an across-the-board sentiment, and it is limited among Muslims. A 2014-15 study showed that although about 66 percent of young Muslims have a negative attitude towards Zionists — Jews committed to the preservation of Israel as a Jewish nation in Palestine — significantly fewer (just 12 percent) expressed hostility towards Jews themselves.

On the other hand, Moroccan Dutch, and more recently Turkish Dutch, youths have been involved in harassing Jews on the streets. Dutch citizens with a Muslim background were clearly present in anti-Semitic incidents in the summer of 2014, with supporters of the so-called Islamic State (IS) terrorist organization waving black flags and chanting "Death to the Jews" in Arabic.

"Anti-Semitic attitudes and/or behavior are disproportionately present among Muslim minorities as well as among people with sympathy for extreme right-wing groups," the researchers said in their summary of findings.

Yet in examining such a multifaceted topic across a wide geographic area, it is difficult to make accurate generalizations.

For example, the authors note "that anti-Semitic attitudes are widely diffused among MENA refugees, as are positive attitudes to democracy, equal rights and peaceful coexistence among Muslims, Christians and Jews."

They further concluded: "There is no evidence that MENA migrants make any significant contribution to anti-Semitism at a societal level."

David Ranan: "Fear is being promoted by politicians.“

Pinchas Goldschmidt, the president of the Conference of European Rabbis, writes that religious freedoms of Jews are being eroded. A mass exodus from the European Union could ensue.