Anti-Semitic online harassment in Germany on the rise, study finds | Germany | News and in-depth reporting from Berlin and beyond | DW | 18.07.2018

When Yorai Feinberg first opened his restaurant in Berlin, he felt welcome. But lately the Israeli has increasingly been the recipient of hate mail. A new study has found that hate in Germany has become more radical. 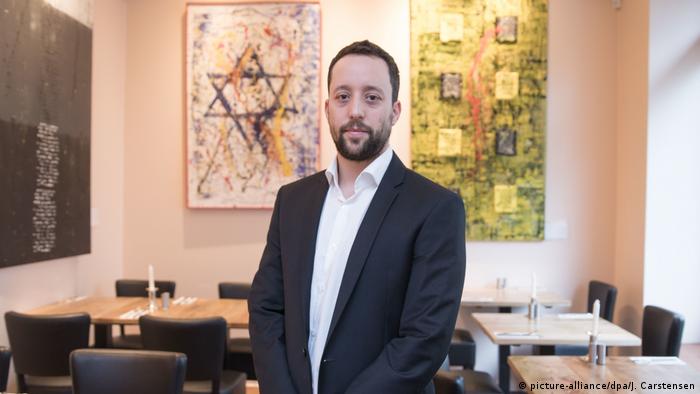 Yorai Feinberg has gotten used to hearing from "Ludwig Fischer." Every few days the Berlin restaurant owner receives emails from a man who writes under the pseudonym of one of Hitler's most notorious SA henchmen. He calls Feinberg a "filthy rat," says the Holocaust is just a "scam" and rants that all Jews will land in the gas chamber.

Feinberg has collected some 60 pages of hate mail from Ludwig Fischer alone. "I don't take it so personally anymore. I don't take it too seriously," says Feinberg.

The Israeli says that when he came to Berlin six years ago, he felt at home right away: "I was immediately welcomed in Berlin." Feinberg lived in Vienna before moving to Berlin, where he says the mood toward Jews and Israelis was less relaxed than in Germany. But he adds: "Things have gotten a bit worse meanwhile."

The last few months have seen several high-profile attacks on Jews in Germany. Just last week a Jewish-American professor was attacked by a young German of Palestinian descent in the city of Bonn. In April, an attack on a yarmulke-wearing man in Berlin made international headlines.

But it is online where attacks and insults are most frequently directed toward Jews and Israelis. That is according to a new study conducted by the Technical University of Berlin (TU Berlin), in which researchers studied 300,000 mostly anonymous texts. Most came from social media sites. The conclusion: Not only are more hateful comments directed at Jews, they are also becoming more radical.

"The threshold is sinking," says Monika Schwarz-Friesel, who heads the TU Berlin institute for language and communication. "People use the anonymity of the internet to disseminate anti-Semitic comments."

Anti-Semitism from the heart of society

Feinberg had his first encounter with anti-Semitism in Germany's capital on the street. In December 2017, a man berated him for several minutes in front of his restaurant. Feinberg recorded the incident and put it online. He says he received a lot of support from across the country. Nevertheless, he has also received an increasing amount of hate mail. "The problem is not a few evil individuals," he says, "but all of those who agree with them."

The TU Berlin study backs up that statement. "Anti-Semitism doesn't only come from right-wing extremists or the populist scene," says Schwarz-Friesel. She notes that left-leaning and liberal people as well as Muslims drew her attention with their anti-Semitic comments. "Everyday anti-Semitism rooted in the heart of society is the most dangerous," in Schwarz-Friesel's estimation. Radical statements are often brushed off as crazy, but when educated segments of society express anti-Semitic sentiment it is much more likely to gain acceptance, she says.

"We were shocked to see that prejudices against Jews had changed so little over the last hundred years," says Schwarz-Friesel, adding that Jews are still seen as the "scourge of the world," a race that must be eradicated.

The arguments of today's anti-Semites differ little from people with similar prejudices in the 16th century. One slight change, however, is that today's anti-Semitism is often mixed with criticism of the state of Israel.

Most of the hate mail directed at Feinberg comes from the far-right. Pseudonyms like Ludwig Fischer point to a particular bent, and the texts themselves tend to suggest a certain ideological template. Writers often deny the Holocaust, claiming that concentration camps never existed and that the Jews themselves were responsible for the mass murder that took place during the Second World War, not the Nazis.

"The atmosphere in Germany has become more extreme overall, in every direction," says Feinberg "Those on the right are getting more extreme and the left has also grown more extreme as a result."

Nevertheless, Feinberg is fighting the hate, but it isn't always easy. When he shared the first hate mail he received from Ludwig Fischer on Facebook, it was immediately taken down and his account was blocked. The social media network's censorship algorithms seemingly do not differentiate between the threatening and the threatened. Feinberg says he also feels abandoned by the justice system: "None of the attackers have been punished yet. I have experienced a number of extreme cases where I think the person issuing the attacks deserves to be punished for their actions."

"If this trend continues, anti-Semitism will become more normal in real life, not just online," says Schwarz-Friesel, explaining that today, the internet and reality are more intertwined than ever.

Still, Feinberg is hopeful that the situation will improve: "I am not going to leave Germany just because of a tiny and insignificant part of society."