Artists in Germany have collaborated to create a hooded sweatshirt with a kippa, a traditional Jewish skullcap, sewn on top. While intended as a statement against anti-Semitism, it also plays with a "provocative limit." 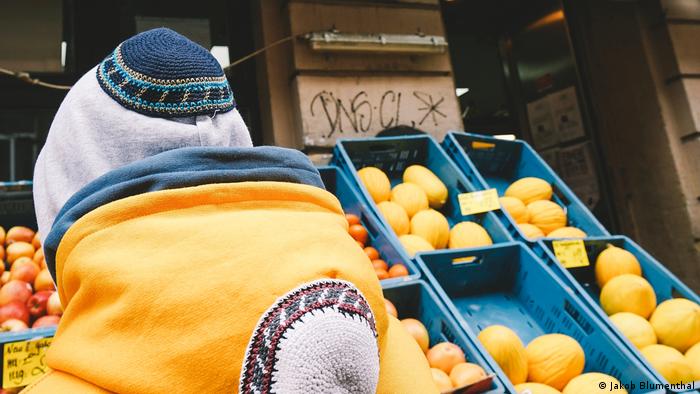 The hoody: It is relaxed and sporty, not particularly eye-catching. But the artists behind a new special hooded sweatshirt are putting the comfortable clothing item in a different light. Whether yellow, green, black gray or blue, all their sweatshirts have one thing in common: They all have a kippa on the hood.

The so-called "Solidarity Hoodie" has taken the traditional skullcap worn by Jewish men and combined it with one of the most ubiquitous pieces of clothing to create a political fashion statement.

The hoody's designers, Berlin gallery owner Johann König and the Frankfurt art collective IGNAZ, have "recycled a religious symbol," said Christoph Pantke, spokesperson from the Berlin König Gallerie, which owns the König Souvenir fashion label that is releasing the product.

Pantke told DW that the Solidartiy hoodies' main intention was to react to the"Berlin wears the kippa" rally, which in April saw thousands don a kippa and take to the streets of the German capital to demonstrate solidarity with the victim of a recent anti-Semitic attack in the city's Prenzlauer Berg neighborhood that was caught on video and, more broadly, condemn acts of anti-Semitism against Jews living in Germany.

With these hoodies, the designers are making a statement for tolerance and solidarity, the gallery spokesman said, and clearly speaking out against intolerance, hate and anti-Semitism. 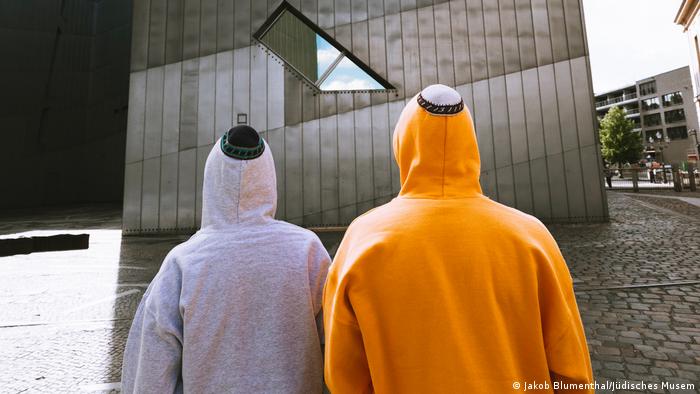 Support from the Jewish Museum Berlin

The museum wasn't involved with the fashion initiative, but when the König Gallerie, located just a few blocks away, asked if they could use the museum as a photo backdrop, the museum consented.

They felt "it was important to support this action in this way," Gregor H. Lersch, the Jewish Museum's head of temporary exhibitions, told DW.

Like the creators of the Solidarity Hoodies, the museum also responded to the Prenzlauer Berg attack and the subsequent demonstration of solidarity with its own initiative, an entryway display entitled "The Kippa Catalyst." With this initiative, the museum hopes to inspire dialogue, reflection and debate — which is also what Lersch believes the Solidarity Hoodies project could achieve. 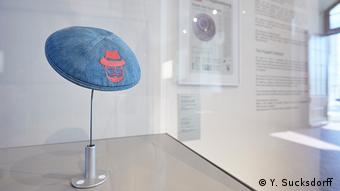 It "would be a little too simplistic if we were to get anti-Semitism under control by wearing trendy hoodies," Lersch said with a lighthearted laugh. "If the hoodies have an effect, then it's to create awareness about the problems that surround wearing a kippa in public, thereby spurring public debate," he added.

The hoody's artists want to do precisely that: make a statement. They don't have a commercial goal. Instead, the project focuses on building awareness of the broader topic and creating more tolerance and solidarity. "No direct references are made to current political and social situations, for instance, to debates over Israel [and its policies in Gaza and the West Bank]," gallery spokesperson Pantke said.

Although one of the three members of IGNAZ is himself Jewish, Pankte emphasized that religious background had no influence on the creation of the Solidarity Hoodies; the designers were instead motivated by artistic and social impulses.

The Jewish Museum's Lersch thinks it's good that the fashion initiative didn't come from the Jewish community, as was the case with "Berlin wears a kippa," but rather from artists that have "a certain political background and impact."

König Souvenir, where the Solidarity Hoodies will be sold, is known for initiatives dealing with social, political and social topics while IGNAZ tries to reach youth through its artistic projects. Sewing a kippa onto a sweatshirt can be seen as provocative

However, the idea of sewing a kippa onto a hoody isn't problem-free. Lersch describes it as "playing with a provocative limit."

"Wearing the kippa is actually a religious moment," the curator explained, and from a religious perspective, "sewing it onto a hoody naturally plays with this idea." Turning the skullcap into a fashion statement decouples it from its significance as an object that expresses religious belief by covering one's head out of awe for God. "This is not something that I definitely support 100 percent," Lersch said, stating that it is "in a certain way a fashion game, a simulation."

At the same time, he considers pulling a kippa-capped sweatshirt over one's head to be a constructed moment in which the hoody wearer tries to step into the role of someone who wears a kippa.

Though he finds this idea interesting, Lersch nonetheless sees it as a "critical limit" that is part and parcel of the hoodies.

Official presentation at a fashionable time

The Solidarity Hoodies will officially be presented on July 6 in Berlin — a timely release for a fashion product since Berlin Fashion Week will be in full swing, with guests from the highest ranks of fashion world present in the German capital.

They will be available for purchase for €89 ($104) through König Souvenir's online store, but it is going to take a lot more than putting on a sweatshirt to solve Germany's struggle against anti-Semitism.

The next step in the fight against religious intolerance is a complex question, Lersch says. But one thing for the curator is clear: "Wearing a kippa in public must simply be possible. Without question."

And he doesn't mean a kippa on a hoodie.

Berlin is a holding a "wear a kippa" protest following the recent anti-Semitic attack in the city. Has wearing indicators of certain religions become dangerous in Germany? And what does the Jewish yarmulke stand for? (25.04.2018)

A religious leader has advised Jews to avoid wearing skullcaps in Muslim districts of some cities. The warning underscores fears about growing anti-Semitism in Europe. (26.02.2015)

What do Jews in Berlin think about the kippa debate?

1700 years of Jewish history. In this commemorative year, Germany looks back and explores new perspectives, but how do we cope at a time when anti-Semitism and right-wing populism are on the rise?