A religious leader has advised Jews to avoid wearing skullcaps in Muslim districts of some cities. The warning underscores fears about growing anti-Semitism in Europe. 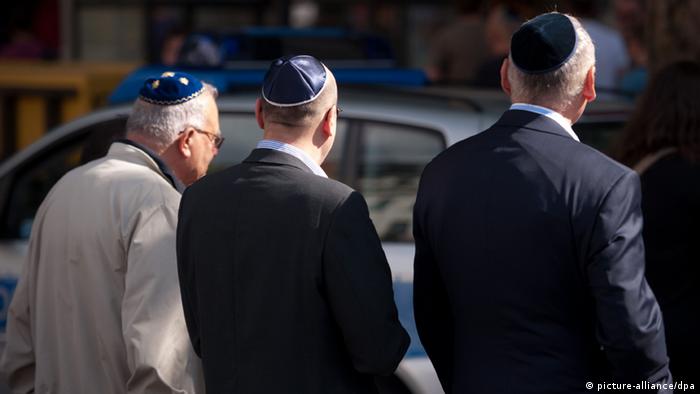 A Jewish leader in Germany advised men not to wear kippas in Muslim-dominated areas of some cities. On Thursday, Josef Schuster, president of the Central Council of Jews, told the Inforadio radio station for Berlin's RBB public broadcaster that community members should not hide out of fear and that most religious institutions had sufficient protection, but added that men should nevertheless avoid displaying their faith in certain areas. Schuster said some Jews had reported verbal and even physical abuse against pedestrians in such areas.

"The question is whether in problem areas, in districts with a large proportion of Muslims, it is sensible to be recognized as a Jew by wearing a kippa or if it isn't better to wear some other form of head covering," Schuster told Inforadio on Thursday. "It is a development that I did not expect five years ago and that's a bit shocking."

Schuster repeated concerns increasingly heard about a new anti-Semitism combining views from the political far right with anti-Israeli sentiment and hostility from some young Muslims. Last week, Berlin's Jewish community decided to send its monthly newspaper out in a neutral envelope to protect recipients.

Such measures also come after recent anti-Semitic attacks by extremists in Paris and Copenhagen and the call by Israel's ambassador to Germany for Jews to abandon Europe, as well as by Israeli Prime Minister Benjamin Netanyahu. It also follows recent acts of solidarity between Jewish and Muslim groups, such as Schuster's own Central Council condemning Germany's "anti-Islamization" PEGIDA movement and a group of Muslims symbolically standing guard outside a synagogue in Oslo to protect it from attacks.

Some people blame increased anti-Semitism on anger over Israel's occupation of the West Bank and the war launched on Gaza last summer, which killed more than 2,000 people, the vast majority of them civilians. In November, a survey by the Friedrich Ebert Foundation highlighted a disturbing blurring of the lines in Germany between hateful anti-Semitism and legitimate criticism of Israel, with 27 percent of those asked equating the country's treatment of Palestinians to the Nazis' persecution of Jews in World War II. Earlier polls had found that about 15-20 percent of Germans held latent anti-Semitic views.

Since 1991, the number of Jews belonging to religious communities in Germany has more than tripled - to some 105,000, boosted by an influx from the former Soviet Union. About the same number of people have Jewish roots but don't practice. This compares with more than 500,000 Jews in Germany before the Nazi Holocaust, and fewer than 50,000 after.