Berlin is a holding a "wear a kippa" protest following the recent anti-Semitic attack in the city. Has wearing indicators of certain religions become dangerous in Germany? And what does the Jewish yarmulke stand for?

Wearing a yarmulke was an "experience," 21-year-old Adam said. He told DW he was not Jewish at all, but an Israeli Arab, and that he had wanted to show a friend that it wasn't dangerous at all to wear the head covering in public. He unluckily experienced an attack that same day.

In 2013, a Berlin Rabbi had said the city had "no-go areas for Jews." The Central Council of Jews has also warned Jews against wearing their traditional skullcap in neighborhoods with a large percentage of Muslims. Now Berlin is holding a "wear a kippa" demonstration on Wednesday in solidarity with the city's Jewish community.

What does the kippa stand for, what is the headgear's religious significance for Jews?

Kippa is Hebrew for head covering, usually a brimless cap made of cloth. Some kippot (the plural of kippa) are plain, others more ornate. The cap is also known as the yarmulke, a Yiddish word — the language of the Ashkenazi Jews from Eastern Europe.

In Israel, the yarmulke is a telltale sign of the specific religious movement the wearer adheres to.

Jewish Halacha law requires men and boys to cover their head when they pray, visit a synagogue or a Jewish cemetery or study the religion. While the kippa has become a religious symbol, any other head covering, such as a hat or scarf, would do, too.

The kippa covering is common at Jewish festivities. All men, even if they are not Jewish, must wear a yarmulke when they enter a synagogue. 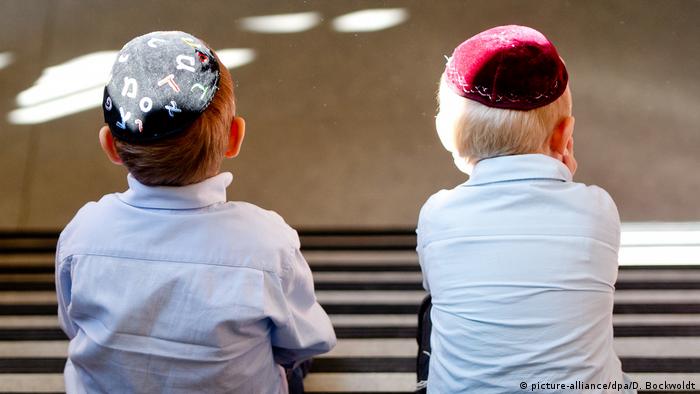 The yarmulke is obligatory at a Talmud Torah school

Jews are not obligated to wear the skullcap outside of these religious services. Orthodox Jews, however, often wear their kippa at all times as a sign of reverence for God. To them, it makes sense to wear the yarmulke all day long as they often intersperse the day with blessings and thanksgiving.

Reform Jewish communities often don't even wear the kippa during prayer services but make it optional, as the tradition is not based on a biblical command or the Talmud, writings that are the primary source of Jewish religious law and tradition.

While Judaism developed more than 3,000 years ago, wearing a kippa is relatively new, and only asserted itself among European Jews in the 17th and 18th centuries.

Wearing it in public as an experiment

The "experiment" of wearing a kippa in public and documenting the reactions isn't new, either. In 2015, Israeli journalist Zvika Klein walked the streets of Paris for hours wearing a yarmulke and recorded people's reactions — spitting out, calling him names — with a hidden camera.

That same year, Amit Jacobi, an Israeli artist, walked through different neighborhoods all over Berlin, without encountering any aggressive reactions.

Yarmulke, mitra or veil: religious head coverings across the globe

Followers of various religions wear special head coverings to express their faith and show humility and dignity. Yarmulkes, mitras, veils and turbans are made of a great variety of materials. (25.04.2018)