Thousands have rallied in the capital and elsewhere in Germany to express outrage at a spate of anti-Semitic incidents. DW's Jefferson Chase attended the Berlin event to see if it entailed anything more than symbolism. 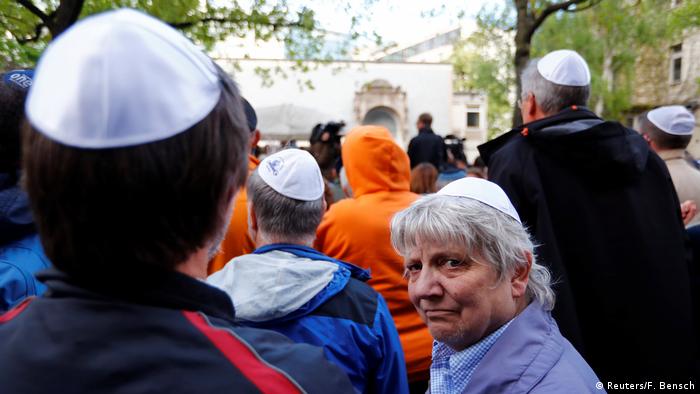 The "Berlin wears the kippa" rally was staged in reaction to the anti-Semitic attack on an Israeli, who turned out not to be Jewish, by three Arabic-speaking men last week. So it was perhaps fitting that many, if not most of the crowd of more than two thousand seemed unfamiliar with the traditional Jewish skullcap called kippa or yarmulke.

"How do I keep this from blowing off?" asked one woman, struggling against the very high winds.

"Try to not to move around very much," her companion told her.

Such minor moments of clumsiness and involuntary humor did little to undermine the spirit of the event, which saw Jews and Gentiles come together outside the headquarters of Berlin's Jewish community in solidarity with the victims of anti-Semitic abuse.

The crowd listened to short speeches by community, religious and political leaders, but the real point was to show presence and highlight a growing, if not always easy to categorize problem in Berlin and beyond. 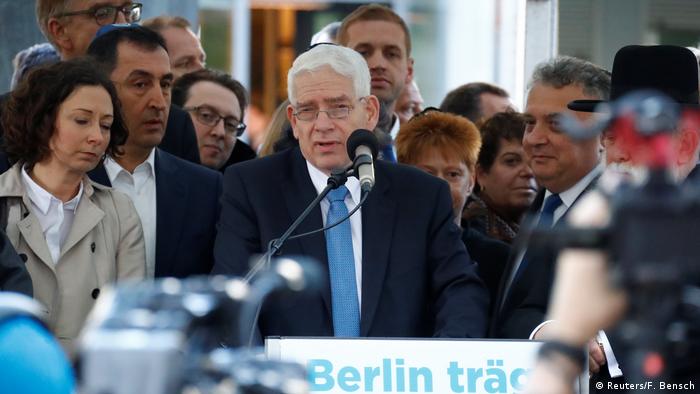 The president of the Central Council of Jews, Josef Schuster, said his remarks had been taken out of context

Present-day anti-Semitism, as several of the speakers reminded listeners, comes in different forms: from right-wing-extremist racism to left-wing exaggerated hostility to Israel, to Islamic animosity toward Jews and the Jewish state.

Recent anti-Semitic attacks in Germany have generated alarmist headlines, but Jewish community representatives stressed the worrisome but hardly endemic scope of the problem.

The head of Berlin's Jewish community, Gideon Joffe, described anti-Semitism as "increasing," adding that things were gradually becoming "uncomfortable" in Berlin. But he also said the situation was "far removed" current trends France or Belgium, where anti-Semitism is more prevalent.

The president of the Central Council of Jews in Germany, Josef Schuster, clarified his recent widely reported remarks in which he advised Jews against wearing the kippa in public by saying that he was only referring to individuals wearing them alone in potentially risky situations. But he also cited the negative example of Jewish parents instructing their children to hide their kippot under baseball hats.

Saplings and symbolism, not strategies

Many of the speakers stressed how lucky Germany was to be experiencing a minor renaissance of Jewish life in the country after the Holocaust and vowed that it would be protected.

"We will tend to this little sapling until it is a strong tree," said Conservative Parliamentary Leader Volker Kauder, employing a horticultural metaphor for Germany's Jewish community.

The government's newly appointed commissioner on anti-Semitism, Felix Stein, promised to "go after and better still prevent every form of anti-Semitism."

No one offered much in the way of practical strategies for reversing the increasing anti-Semitic trend. Arguably, as some speakers pointed out, this is because awareness first needs to be raised among the general public that anti-Semitism remains a current problem in German society.

But part of the hesitancy surely relates to a general unease in the political center and left at discussing to what extent, if any, the rise in hostility toward Jews is related to Germany's Muslim communities in general and the recent influx of largely Muslim migrants. 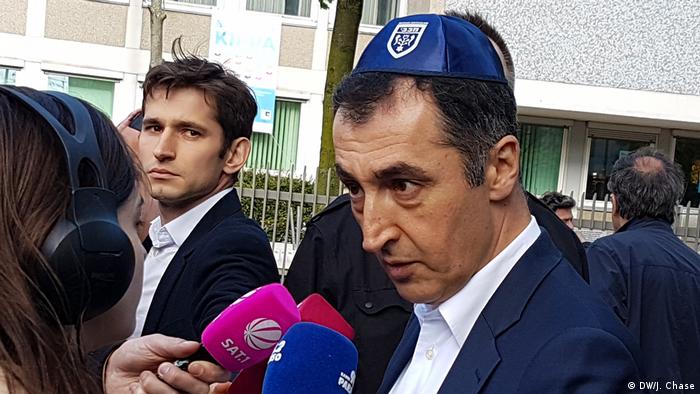 Green politician Cem Özdemir's address was the highlight of the speeches

No place for the AfD

All of Germany's major political parties came out in support of the "Berlin wears the kippa" initiative, including the far-right populist Alternative for Germany (AfD) party.  The populists put the blame for increased anti-Semitism squarely on Muslim migrants and see the issue as an embarrassing Achilles' heel of the conservative-led government.

The AfD had announced that a number of prominent members would be attending the event, but if they were present, they were difficult to spot. And Turkish-German Green MP Cem Özdemir told the crowd that the populists, some of whose members have themselves been accused of anti-Semitism, had no place at the rally.

In his enthusiastically received speech, Özdemir also said it was incumbent upon Muslims and other non-Jews to stick up for their Jewish fellow citizens.

"Every person, regardless of whether he's a practicing Muslim or not, has to stand at the side of Jews," Özdemir said. "It's my wish that some day an event like this won't have to be staged by the Jewish community."

That was as close as any of the speakers got to directly confronting one of the most delicate aspects of contemporary anti-Semitism in Germany. The rally in Berlin on Wednesday evening was about drawing widespread attention to a problem in order to give momentum to efforts to nip it in the bud.

The hard analysis – and potentially tough conclusions – will have to wait for another day.