Attacker in anti-Semitic video turns himself in to police

Police say the attacker in the video, which has created a global uproar, is a 19-year-old from Syria. But experts warn about premature conclusions about "imported anti-Semitism" in the German capital.

A police spokesman said that the man seen on the video trying to whip two young men wearing kippas, traditional Jewish head coverings also known as yarmulkes, gave himself up just after noon on Thursday. The man was identified as a 19-year-old from Syria, but police gave no details about when he came to Germany or where he is living.

The disjointed, brutal images of the attack, filmed on a mobile phone, shocked people around the world when publicized on Wednesday morning. Journalists rushed to publish reports that later proved misleading about two "Jews" being attacked for wearing kippas on the streets of Berlin.

DW was able to interview the two victims and establish the following:

-      Neither of them is Jewish. One, Adam, is an Israeli citizen who comes from an Arab family in Israel and who studies veterinarian medicine in Germany. The other, Salah, is a German citizen with Moroccan roots who describes himself as an atheist.

-      The two men were given the kippas as gifts. On Tuesday evening, they donned them on their way to visit an Israeli friend in Berlin to experience what it was like to wear a Jewish symbol in public, but say that this was not designed to provoke anti-Semitism.

-      They were taking selfies when they were abused in Arabic by the attacker, who then tried to whip Adam with his belt. They told the attacker in Arabic and German to stop, and Adam filmed the incident. Two women intervened, while others in a crowd of onlookers did not.

-      Adam says he told journalists who asked after the attack that he was not Jewish, but that most reporters simply assumed he was Jewish because of the kippa.

Police released no information on Thursday about the attacker's possible motivations. He is heard yelling the Arabic word for "Jew" on the video.

'Two to three incidents a day'

While some details of the incident, which took place in the upscale neighborhood of Prenzlauer Berg on Tuesday, remain unclear, there is no denying that anti-Semitism is a growing problem in the German capital.

Lost in the uproar created by the video on Wednesday, the Antisemitism Research and Information Office (RIAS) released statistics about the number of anti-Semitic incidents in Berlin in 2017. RIAS said it had counted 947 such instances of anti-Semitism last year – a 60-percent increase over 2016.

"This is the highest number since we began collecting data," said RIAS Project Director Benjamin Steinitz in a statement. "People in Berlin are confronted on a daily basis with anti-Semitism. On average we find out about two to three incidents a day."

RIAS noted with concern that the number of anti-Semitic incidents in places of education had more than doubled, from 14 to 30, between 2016 and 2017. The group's findings support complaints by Jewish groups in Berlin of rising anti-Semitism in the German capital and come after a spate of cases in Berlin schools.

The far-right populist Alternative for Germany (AfD) party was quick to blame the attack depicted in the video on the influx of refugees and other migrants to Germany since 2015. AfD Co-Chairman Jörg Meuthen, for example, tweeted that Germany had become "the world's leading importer – of Muslim anti-Semitism."

But RIAS cautions that anti-Semitism can be observed throughout German society, on the right- and left-wing extremes and in the political mainstream. The group warns against drawing simplistic conclusions and equations.

"We see that incidents perpetrated by people of Arab origin attract special attention and are often connected with reductions of the problem to so-called imported anti-Semitism," Steinitz told DW. "But there was always anti-Semitism here. The problem didn't start in 2015."

Of the 947 incidents in 2017, only 18 involved physical violence, but RIAS says that a potential for violence is inherent in anti-Semitism.

"An attack is the expression of the violence of the anti-Semitic ideology," Steinitz explained. "There are lots of situations in which people are verbally abused or threatened with violence, and this potential for violence has been repeatedly realized, as was the case with the incident in Prenzlauer Berg." 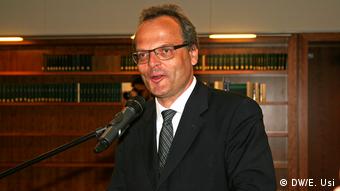 Up to 90 percent of anti-Semitic incidents in Germany are classified as right-wing extremist. But Germany's newly appointed Anti-Semitism Commissioner Felix Klein says better data is needed.

"One urgent topic is criminal statistics, according to which 90 percent of anti-Semitic crimes are committed by far-right extremists," Klein told Die Welt newspaper. "But I hear something different from Jews in Germany. Above all, Muslim anti-Semitism is greater than the statistics express. But until now, we only have these numbers."

Prominent Muslims and Muslim community leaders have rejected the anti-Semitism depicted in the video.

For instance, Berlin State Secretary Sawsan Chebli, who comes from a Palestinian family, tweeted about the video: "I am shaken to the core and appalled and ashamed at this man who speaks my language."

The video has reverberated up to the highest level of German politics. In comments marking the seventieth anniversary of the state of Israel on Thursday, German Chancellor Angela reiterated Germany's commitment to do everything it could to fight against anti-Semitism.