Police logged over 1,400 crimes targeting Jews in Germany last year, according to a newspaper report. The vast majority of the crimes were carried out by right-wing extremists or people with far-right tendencies. 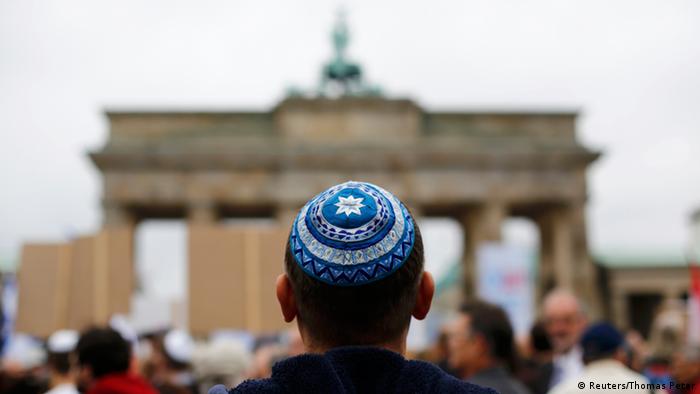 The rising trend of anti-Semitic crimes in Germany shows no signs of abating, according to a newspaper report on last year's crime statistics that was published on Sunday.

In 2017, German police registered a total of 1,453 crimes that targeted Jews or Jewish institutions, reported German newspaper Tagesspiegel, citing figures from the German government. The data was compiled in response to an inquiry from Bundestag vice president and Left party lawmaker Petra Pau.

The German government expects the figures to rise even further since the data provided by the states is not yet final, the paper said.

Far-right motives in a majority of cases

In 1,377 of the cases — 95 percent of the total — police determined that a right-wing motive had driven the crimes.

Police attributed 33 of the offenses to foreign-born anti-Semites, not including Islamists.

Another 25 of the cases were "religiously motivated," including those involving either foreign-born or German Muslims with extremist beliefs, according to the Tagesspiegel report.

In 17 of the cases, authorities were unable to determine a political motive behind the crime. Police determined a left-wing motive in one case of incitement.

Pau, who initiated the anti-Semitic crime inquiry, said she was deeply concerned about last year's figures. Speaking with Tagesspiegel, Pau noted that "the number of unreported cases could be considerably higher" since many of those affected are reluctant to report the crime.

Last month, German lawmakers passed a bill to implement tougher laws to tackle anti-Semitism, including the creation of a commissioner post to develop and carry out a strategy for rooting out anti-Semitic sentiment and crime.