The former president of the Central Council of Jews in Germany says Jewish life is only possible with police protection. She claims the threat comes from the center of German society and says the government needs to act. 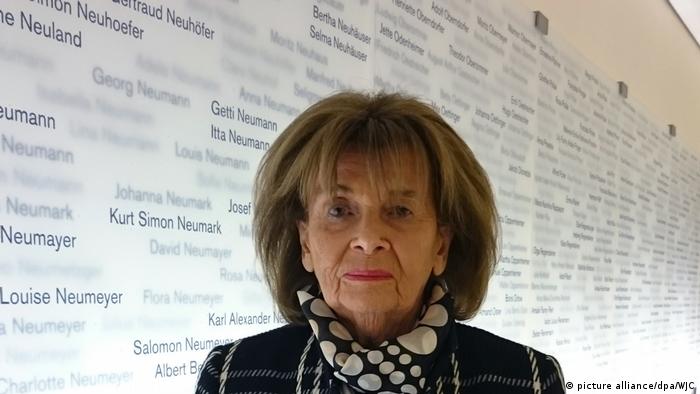 In an interview with the German newspaper Heilbronner Stimme the former president of the Central Council of Jews in Germany, Charlotte Knobloch, voiced grave concern Friday over growing anti-Semitic sentiment in the country. She said that public Jewish life is under threat and can only be lived out "in public with police protection and under the most serious security precautions."

Knobloch pointed out the fact that Hanukah celebrations in Berlin and Munich, as well as the large menorahs installed in both cities, were, by necessity, accompanied by massive, around-the-clock police protection. A large menorah installed in the city of Heilbronn, for instance, was attacked and damaged by vandals.

'Anti-Semitism in the heart of German society'

Knobloch also called for Germany's federal government to create a new authority to monitor and defend against growing anti-Semitism: "Anti-Semitism, has grown on the right and the left, in the Muslim community and also in the heart of German society." Knobloch, who is currently the president of the Jewish Community of Munich and Upper Bavaria, says that an efficient approach to fighting public and covert anti-Semitism is long overdue.

In April, Germany's parliament, the Bundestag, recevied an expert report it had commissioned on the problem. The report found that Jews in Germany were facing increasing anti-Semitism in their everyday lives, leading them to fear for their safety.

Read more: How safe are Jews in Germany?

More recently, a video documenting a 60-year-old German man berating and insulting a Jewish restaurant owner in Berlin highlighted the issue in extremely vivid terms. A friend of restaurant owner Yaori Feinberg filmed the ugly encounter and it subsequently went viral after she put it online. Feinberg, who was later visited by Israeli Ambassador Jeremy Issacharoff and praised for his courage as well as for keeping his cool during the confrontation, said that the run-in was "the tip of the iceberg," adding that he regularly receives anti-Semitic hate mail.

'Disgusting but not unusual'

Commenting on the video, Charlotte Knobloch said: "The hostility and threats that can be seen in the video are disgusting but not unusual. Many overt and covert forms of anti-Semitism are on the rise in every area of society." She underlined the fact that the video did not represent an isolated incident but rather the "everyday experience of Jewish people. Anti-Semitism is widespread online and on social media but also in the analog world. Jewish students, for instance, suffer greatly from this phenomenon—'Jew' has once again become an insult in German schoolyards."