The 15-year-old girl tried to stop her classmates from making anti-Semitic jokes and displaying Nazi symbols. The Dresden student was awarded for her courage in reporting her classmates to the police. 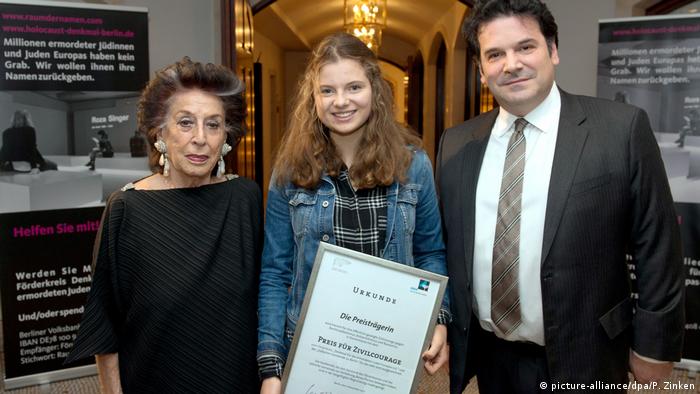 The trend began with what many would brush off as reckless teenage behavior. Some students at a Dresden school, considered it cool when one's cellphone battery was 88 percent loaded, alluding to the numerical neo-Nazi code for the letters "HH," short for "Heil Hitler."

When a student sneezed, the others responded with a "Heil" rather than the usual "Gesundheit" or "god bless you." They considered the infamous Hitler salute "funny."

"Suddenly 'Jew' was an insult," said 15-year-old Emilia S., who found the anti-Semitic jokes too much to handle.  But she did not know how to react. She was afraid of being seen as the odd-one out by her classmates.

But soon it started to get worse. The jokes and Nazi symbols became more and more extreme.

One day in her classroom, Emilia came across a picture of smoke bearing a caption "Jewish family photo." She finally decided to stand up and asked her classmates to stop the "Nazi nonsense."

She was met with hostility.

"The source of the pictures responded with messages like 'I should immigrate to Poland' and she had 'probably inhaled too many dead Jews'," said Emilia, who reported the students for incitement.

"Maybe many felt what I did was right, but they didn't think they could speak up," Emilia S. told DW.

Emilia feels the students in her class did not have the "right attitude." She says some students took such tragic aspects of German history very lightly, while the others joined them out of fear.

The 15-year-old's courage was recognized on Tuesday by the Memorial to the Murdered Jews of Europe with the Prize for Civil Courage against Right-wing Radicalism, Anti-Semitism and Racism,.

Emilia donated a quarter of her €2000 ($2,300) prize money to a 14-year-old Jewish boy from Berlin, who suffered anti-Semitic abuse at the hands of his classmates earlier this year.

The boy's family said they would donate the prize money to a new counselling center for victims of anti-Semitic violence.

Stickers displaying Anne Frank wearing football jerseys have appeared in Germany as an anti-Semitic provocation by neo-Nazi fans. Dortmund and Leipzig hooligan groups appear to be copying their Italian counterparts. (31.10.2017)

Germany's Central Council of Jews has accused the government of not doing enough to combat rising anti-Semitism. The body has renewed its call for a commissioner tasked specifically with fighting the problem. (23.07.2017)