Locals join Jewish community for vigil in German city of Halle | Germany | News and in-depth reporting from Berlin and beyond | DW | 10.10.2019

Hundreds of people gathered at a synagogue in Halle, Germany, to hold a vigil for two people killed in the shootings. The German justice minister described the incident as a "far-right terror attack." 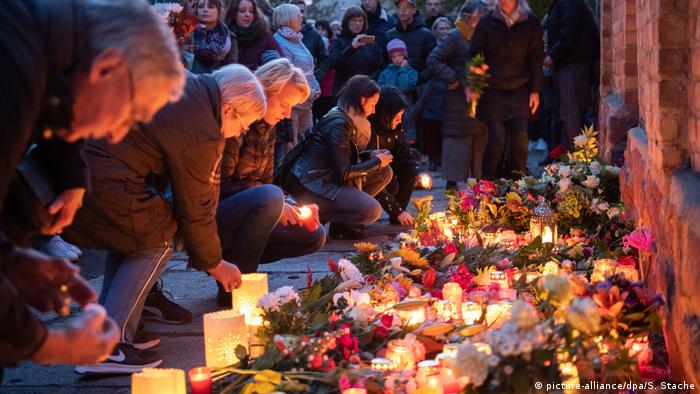 Near silence filled the narrow, leafy Humboldtstrasse in the eastern German city of Halle on Thursday, though the street outside the synagogue was packed with TV cameras, reporters, police officers, as well as several dozen mourners.

Locals, both Jewish and not, filed by to lay flowers and candles at the gates and gather near the neighboring Jewish cemetery to remember the victims of an attack that could have claimed many more lives. Later in the morning, they were joined by President Frank-Walter Steinmeier, Interior Minister Horst Seehofer and other local politicians who spent time inside the synagogue speaking to community members.

Hundreds of people also gathered spontaneously in the city's central marketplace on Thursday evening, laying flowers and candles in the center of the square.

Two passers-by were killed on Wednesday by a gunman who expounded far-right hate speech on a video he apparently live-streamed during the shooting. The man appears to have shot the two people after a thwarted attempt to enter the Humboldtstrasse synagogue, where people had gathered for Yom Kippur — the holiest day of the Jewish year.

At a press conference on Thursday, German Interior Minister Horst Seehofer said: "We, unfortunately, have to face the truth, which is that the threat of anti-Semitism, right-wing extremism and right-wing terrorism is very high, and has been for some time now."

Seehofer batted away the suggestion at the press conference that the security forces under his authority had in some way been blind to far-right terror in recent years, and concentrated too much on the threat of immigration.

"If you come to a new security situation, you have to make a new assessment," Seehofer said. "The threat of far-right terrorism is high, which means you always have to be prepared for an attack."

The authorities emphasized that they were working on the assumption that the gunman had planned the attack alone, though they did not rule out that he had connections to a far-right network.

German Justice Minister Christine Lambrecht said the incident in Halle was being treated as a "far-right terrorist attack" carried out by an individual.

'Hate and racism on the rise'

There were plenty of signs of solidarity in the Halle neighborhood on Thursday morning: an improvised banner reading "Humboldt Str. against anti-Semitism and hate" was hung from a window opposite the cemetery gates, while a solemn crowd, many carrying flowers, were gathered beyond the police lines into the early afternoon.

The synagogue itself is largely walled off from the street, surrounded by a high wall with locked gates — old security measures that may have saved lives on Wednesday.

"I come past here regularly and I always thought it was very sad that this synagogue is so shut away because I couldn't imagine why," said Dirk Gernhardt, a local who lives only 150 meters away, who brought a flower to lay at the gate. "Now I know that the fact that it was shut away may have saved many dozens of lives. I think that's extremely shocking."

"This is a moment when one has to stop and give our thoughts to the victims," Gernhardt told DW. "But also to consider what has happened in the last few years in this country, that now there are people who think they can walk through the streets and murder people in cold blood for their personal kick." 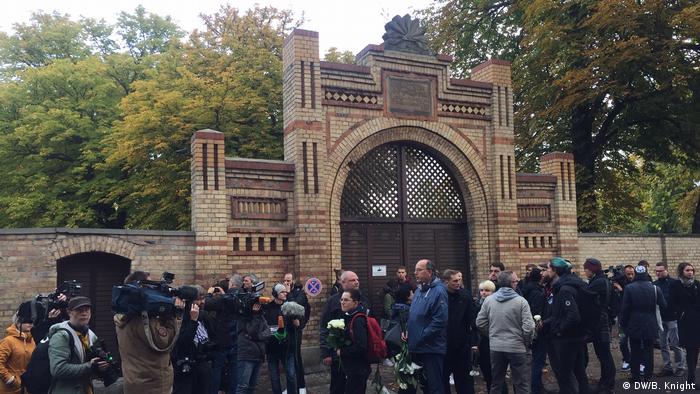 Hundreds of people attend vigil in Halle on Thursday

Karamba Diaby, a Senegalese-born Social Democrat who represents Halle in Germany's parliament, was among the local politicians to visit the synagogue on Thursday and speak to Jewish community members.

"I was extremely upset when I heard the news yesterday, and I'm still stunned that something like this could happen in Halle," he told DW. "This is a very open district, with many generations and people from different cultures. The fact that the perpetrator chose this district makes me extremely sad."

Germany's anti-Semitism commissioner, Felix Klein, told DW that the question about whether Jews were safe in Germany needed to be asked every day. "Of course it's a miracle that we still have Jewish life at all in Germany after 1945, but we must reinforce our efforts all the time."

"Of course there has always been anti-Semitism in Germany, even after 1945. But now it has grown and it is more visible, especially through the internet and social media. My aim of course is to make my job superfluous."

Questions asked about the lack of police presence

Meanwhile, Jewish community leaders have condemned the lack of police protection outside the synagogue on Yom Kippur, the holiest day in the Jewish calendar.

"It is scandalous that the synagogue in Halle is not protected by police on a holiday like Yom Kippur," Josef Schuster, head of the Central Council of Jews in Germany. "This negligence has now been bitterly repaid."

Some synagogues in major German cities receive regular special police protection, but the synagogue in Halle was not among them on Wednesday. Instead, it was protected by a single private security guard.

Jeremy Borovitz, who was at the synagogue during the shooting, told DW, "It's normal not to have a police presence at the synagogue. We asked why this was, and the response from community members was: It's a holiday, it’s not so dangerous."

Israeli Ben-Ami Welt is the head of crisis management at the Security and Crisis Center, an organization founded by the European Jewish Congress that provides guidance to Jewish communities throughout Europe facing anti-Semitic attacks. He said that the work of dealing with anti-Semitic attacks is particularly difficult in Germany.

"Germany is an extremely challenging environment because Germany has a large Jewish population, but they are spread over a hundred separate communities," he told DW.

Welt also suggested that Halle's relatively small Jewish community, of only 700, may not have been as well-prepared for such an attack as others.

"There are a lot of gaps to cover in this community," he said. "Halle is in eastern Germany, which is more or less a backwater of Jewish life in Germany, and we haven't been able to establish a relationship with this community before."

Halle's Jewish community is thought to be a thousand years old, though there has barely been a century when it wasn't driven out by violent pogroms or repressed by new laws.

Halle's synagogue is itself a replacement: a former hall next to the Jewish cemetery converted after World War II to replace the nearby Old Synagogue that was destroyed by the Nazi-inspired pogroms of November 1938.

Anti-Semitism a growing concern for majority of Europe's young Jews

Young Jewish Europeans believe anti-Semitism is on the rise in their countries. An EU report shows young Jews are concerned about safety and blame social media networks for a rise in anti-Jewish sentiment. (04.07.2019)