Deadly attack targets synagogue in Germany — as it happened

A shooting outside a synagogue in the eastern German city of Halle left two people dead and two injured. Interior Minister Seehofer confirmed an anti-Semitic motive. 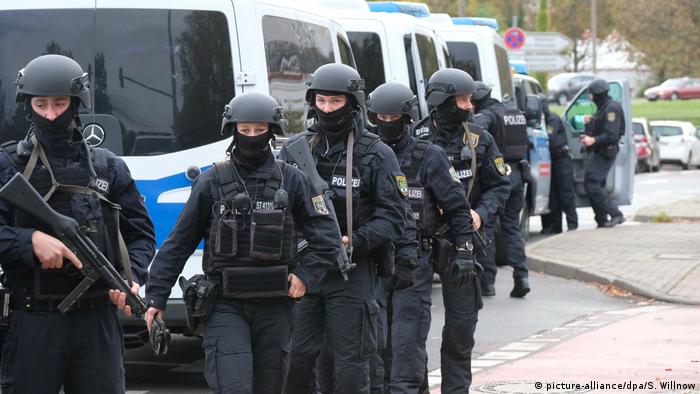 - Two people were killed in the attack in the eastern German city of Halle. Two more wounded victims have been taken to a local hospital.

- Shots were fired near a kebab shop and at a synagogue while the Jewish community was observing Yom Kippur. Federal Interior Minister Horst Seehofer has said that at least one of the motives for the attack must be anti-Semitism.

- The police have detained one suspect, and now believe the 27-year-old German man acted alone.

All updates in the UTC/GMT time zone

21.40: We’re bringing to end our live updates on today's tragic events in Halle. To read a full round-up of the news story click here.

He said that the rise in anti-Semitic attacks "must be a call to action for all Europeans." He added that he was "deeply shocked" by the day's violence and offered his prayers to the victims' loved ones.

18:53 Before the Germany-Argentina football match kicks off in Dortmund, the tens of thousands of people in the stadium observed a minute of silence for the victims of the Halle attack.

18:45 Streaming video site Twitch, which is owned by Amazon, has said it "worked with urgency" to remove footage of the attack, which was being livestreamed by the suspected assailant at the time of the shooting via a camera mounted to his helmet.

In the video, the man can be heard denying that the Holocaust happened before making xenophobic and misogynistic statements. He then attempts to enter the Halle synagogue, but find the gates shut and locked, swears and shoots at a passerby.

18:14 Chancellor Angela Merkel is taking part in a vigil with Berlin's Jewish community at a synagogue in the capital.

18:06 DW's Christoph Strack reports that the congregation in Halle's Humbolt Street synagogue today included some visitors from the Berlin Jewish community as well as one rabbi from New York.

One young woman, who saw the perpetrator leave the scene, told DW that she then went into the kebab shop, where the other shots were fired, and saw shell casings and a weapon on the ground. She tried to help a man who had been shot in the head, but he was pronounced dead by an emergency responder. “I immediately felt so angry. I was born in Halle and grew up here. I also know the city’s nasty side," she said.

17:53 Josef Schuster, president of the Central Council of Jews in Germany, criticized city police, saying, "it is scandalous that police were not protecting the synagogue in Halle on a holiday like Yom Kippur."

"The brutality of the attack surpasses everything we have seen in recent years, and is deeply shocking to all Jews in Germany."

17:12 German media has reported that the suspect is one Stephan B., a 27-year-old German not previously known to authorities. Authorities are following up earlier reports of accomplices fleeing in a car, but are now also looking at the possibility that the assailant acted alone.

Police have begun searching serveral houses in Landsberg, about 15 km (9 miles) which had also been on lockdown earlier after reports of possible gunfire.

16:49 Chancellor Merkel's spokesman said that she offered her "deepest condolences" to the families and community.

"Our solidarity is with Germany's Jews on this Yom Kippur holiday. Our thanks go out to security forces still deployed."

At the same time, footage began to circulate on social media that one attacker had reportedly live streamed during the attack. According to Germany's Spiegel magazine, there are clear references to anti-Semitic and right-wing extremist motives in the video.

Interior Minister Horst Seehofer has said that they are assuming anti-Semitism is at least one motivation for the shooting.

16:23 Halle police have written on Twitter that the situation is "no longer considered an imminent risk" and said that citizens were allowed back on the streets of the city.

After hours of being shut down, police have also reopened the city's train station.

16:05 Catholic Cardinal Reinhard Marx, head of the German Bishops' Conference, condemned the attack: "We stand in solidarity with the Jewish fellow citizens, anti-Semitism and blind violence must have no place in our society," he said in a statement. "We stand close to the Jews in our country, our sisters and brothers, especially in these hours in prayer."

Read More: How safe are Jews living in Germany?

15:44 Authorities in Halle have confirmed that one male and one female victim were being treated in a local hospital for gunshot wounds.

15:32 A spokeswoman for the city government of Halle has clarified that there were shots fired in two parts of the city, with one incident occurring near the synagogue and Jewish cemetery, and another outside of a Kebab shop. At least two suspects fled in what was possibly a stolen vehicle, heading south on the route that leads to Munich.

15:19 Germany's foreign minister, Heiko Maas, expressed his sadness at the timing and apparent anti-Semitic nature of the attack, saying on Twitter: "That on the Yom Kippur a synagogue was shot at touches all our hearts. We must all act against anti-Semitism in our country."

Malu Dreyer, the head of Maas' Social Democratic Party (SPD), said, "many signs suggest that this brutal attack was directed at Jewish life in Germany. We will never accept this."

15:11 Igor Matviyets, 28, a member of Halle's Jewish community, spoke with DW about his shock and sadness, though he pointed out that there have been a string of smaller hate crimes in Halle in recent years.

"Like everywhere else, there were also anti-Semitic incidents in Halle, not as many as in bigger cities like Berlin, but things happened here, too — never life-threatening, but graffiti, shouting, some anti-Semitic demonstrations as there is a far-right scene in Halle of course."

"I am shocked and don't know how I will feel in this city in the coming days and weeks."

14:59 Police in Bavaria have said they are preparing officers over suspicions that the escaped suspects may be fleeing to the southern state.

Rainer Haseloff, the conservative state premier of Saxony-Anhalt, where Halle lies, issued a statement saying: "I am appalled by this detestable act. Not only have people been torn out of our midst, it is also a cowardly attack on peaceful coexistence in our country. My sympathy goes to the families of the victims."

14:13 Halle police warned against speculation on their Twitter feed after a rumor began spreading rapidly online that some people had been taken hostage in a city supermarket. The police stressed that there was no evidence of a hostage situation.

Train travel between Hamburg and Munich and Berlin and Munich has been disrupted with the Halle train station still closed, rail operator Deutsche Bahn (DB) said. 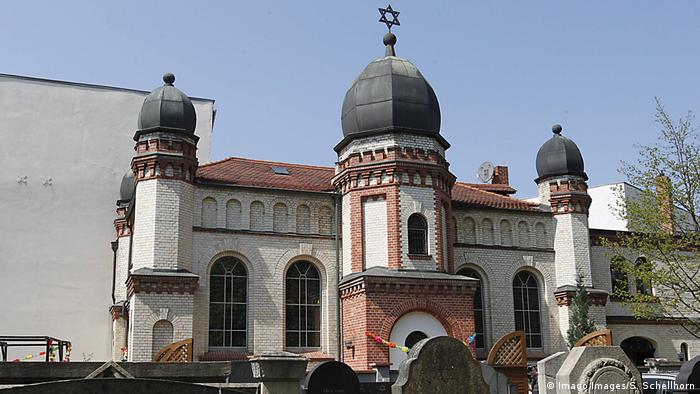 The synagogue in Halle and an adjoining cemetery are located in a central part of the city of some 240,000 residents

13:49 Federal prosecutors in Germany have announced that they will be handling the murder case in Halle.

An anniversary celebration for the lead-up to the fall of the Berlin Wall planned for nearby Leipzig this evening will still go ahead, organizers have said.

13:24 Max Privorotzki, head of Halle Jewish Community, tells the German press that the building was "fully occupied" at the time of the shooting because of Yom Kippur.

He said that a suspect had tried to enter the building, but was unable to get past security measures and barricades.. "A heavily armed attacker with a helmet and rifle tried to shoot at our doors," Privorotzki added.

12:55 Officials said that police protection near synagogues was being strengthened in Halle, Leipzig and Dresden for the time being. In Leipzig, major commemorations are planned for this evening to celebrate the 30th anniversary of the rallies that eventually led to the fall of the Berlin Wall.

12:30 Shots were also reported in the neighboring town of Landsberg following the shooting in Halle, but police did not immediately provide further details or say whether the two shootings were related.

12:17 Police and Jewish community leaders confirm that the shooting happened in the Paulusviertel district, near a synagogue. While no connection could be declared with certainty, the attack took place on Yom Kippur, the holiest day of the year in Judaism.

12:00 Two people are confirmed dead by authorities, though no further details of their indentities have been given. Officers say they have detained one suspect.

The main train station in Halle, located outside the city of Leipzig, was also closed as police continue to search for the suspects.

11:20 Police in Halle confirm that shots were fired in the eastern German city. They warn locals to stay indoors, saying multiple possible suspects fled in a car. One eyewitness told regional public broadcaster MDR that one of the suspects was wearing a military-style combat uniform and was armed with "multiple weapons."

Before 1933, there were some 2,800 Jewish temples in Germany. Today there are just 130 synagogues and prayer rooms — a reflection of the tumultuous past of German Jewish life, but also evidence of its current resurgence. (08.11.2018)