President Frank-Walter Steinmeier has appealed for Germans to show civic courage in the face of anti-Semitism. The call comes amid growing attacks on Jewish people in Germany. 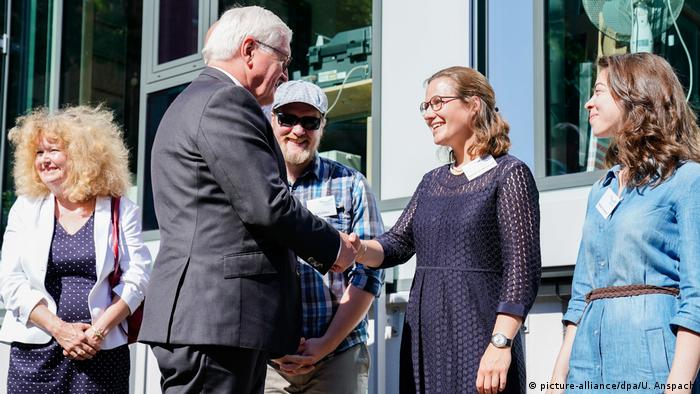 "Looking away, ignoring it, saying nothing and doing nothing when Jewish citizens are insulted, mocked or violently attacked — that cannot, and should not, be an option for any of us," he said.

Steinmeier pointed out that Jewish citizens in Germany were "degraded, insulted or even assaulted" on a daily basis. He added that each of these incidents was an attack on the foundations of democracy.

The president was speaking at a ceremony to mark the 40th anniversary of the Center for Jewish Studies Heidelberg (HfJS).

Steinmeier's concerns were echoed by Josef Schuster, the president of the Central Council of Jews in Germany, who told the 600 audience members that government and law enforcement agencies needed to do more to stamp out attacks on the Jewish community.

"We need a judiciary that recognizes anti-Semitic and other racist crimes for what they are and punishes them accordingly," he said.

The Interior Ministry has attributed most of these crimes to right-wing groups, and analysts say the rise of far-right political forces such as the Alternative for Germany (AfD) has also contributed to anti-Semitism in the country. The AfD openly question Germany's culture of atonement for World War II and the Holocaust.

Referring to the rise in attacks and the "frightening" election gains made by the AfD in Germany's eastern states, Schuster said "there must be no tolerance for those who shake the foundations of our democracy."

Founded in 1979, the HfJS is supported by the Central Council of Jews and funded by the federal government. In his speech, Steinmeier said the college played a vital role of nurturing Jewish life in Germany and was a "symbol of reconciliation and a promise for the future."

German President Frank-Walter Steinmeier has said German society must oppose anti-Semitism on a daily basis. His remarks came a day before a planned Quds Day march in Berlin protesting against Israel. (31.05.2019)