German jump in anti-Semitic crimes 'worrying, but no surprise'

The number of anti-Semitic incidents has increased by 10 percent over the previous year. Jewish leaders said the numbers merely reinforced what people had already seen in their daily lives. 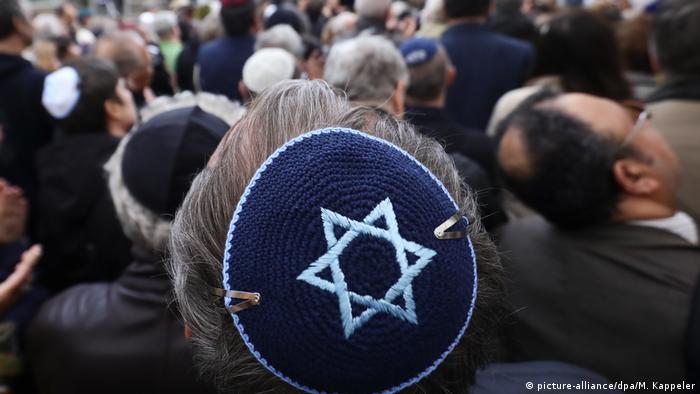 The number of anti-Semitic crimes increased significantly in 2018 over the previous year, according to government statistics released on Wednesday. There were 1,646 incidents recorded nationwide, compared to 1,504 in 2017.

Some 43 people were injured, though none fatally, in 62 acts of violence. At least 282 were instances of hate propaganda. With 37 acts of violence recorded in 2017, this constitutes an increase of around 60 percent in  12 months.

Police said that 19 people were arrested, but did not provide details as to how many charges were filed.

The numbers were released by the government's office of criminal statistics, following a request from the opposition Left party in the Bundestag.

'Worried, but not surprised'

"The latest numbers are not yet official, but again show a tendency – and that is alarming," said Josef Schuster, president of the Central Council of Jews in Germany, adding that it offered tangible proof of Jewish people's subjective impressions.

According to a survey done by the EU, 41 percent of Jews in Germany who have been the victims of anti-Semitic attacks said the perpetrators were of a Muslim background, and 20 percent were right-wing extremists.

Felix Klein, who leads Germany's government anti-Semitism office, told DW he was "worried, but not really surprised. It corresponds to what I have learned in conversation with Jewish groups and representatives."

"Unfortunately, anti-Semitism is rising all over Europe," a problem that Germany will make its major priority when it takes over the EU Presidency next year, Klein added.

The former head of the Central Council of Jews in Germany told EU lawmakers that anti-Semitism was resurfacing in Europe. She singled out the UK Labour Party's leader, Jeremy Corbyn. (30.01.2019)

A German delegation has laid a wreath at the former Auschwitz-Birkenau death camp. Amid the commemoration, Foreign Minister Heiko Maas has warned Germany's Holocaust memory is under "pressure from the extreme right." (27.01.2019)