A surge in anti-Semitism in Europe has made many Jews consider leaving, according to an EU survey. Anti-Semitism has risen particularly in France, with Jewish people in Germany reporting the highest level of harassment. 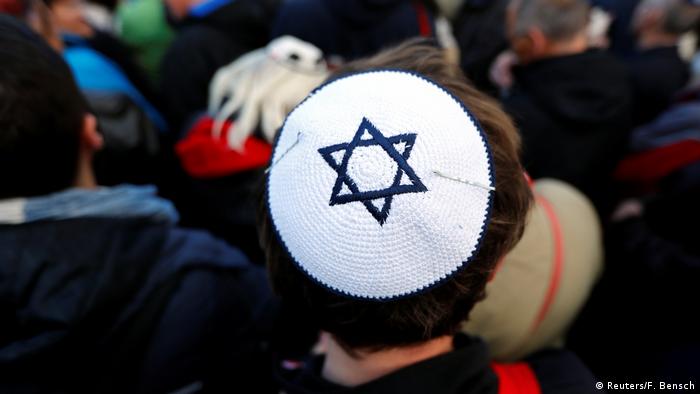 Some 90 percent of European Jews believe anti-Semitism has grown stronger — particularly in France — in recent years, according to a European Union survey published on Monday.

Over one third of the Jewish respondents said they'd considered leaving the EU in the past five years due to concerns for their safety, the European Union Agency for Fundamental Rights (FRA) found.

"Member states must take note and step up their efforts to prevent and combat anti-Semitism. Jewish people have a right to live freely, without hate and without fear for their safety," said FRA Director Michael O'Flaherty.

The FRA questioned 16,395 Jewish people for the anti-Semitism survey, which was also carried out in 2012.

Out of the Jewish people surveyed in France, 95 percent of them named anti-Semitism as the biggest societal and political issue, increasing from 85 percent during the first FRA survey in 2012.

Among the respondents, 77 percent of respondents said that the level of anti-Semitism has "increased a lot" over the past five years. Another 58 percent said they worry about being physically attacked for being Jewish.

Although anti-Semitism manifests itself heavily online and in social media platforms, an alarming number of respondents in France said they've witnessed such expressions out in the open.

Some 91 percent said they've heard hostility towards Jews in the street or in other public places.

Jewish people living in Germany reported the highest rate of anti-Semitic harassment in the surveyed countries, with 41 percent of them reporting harassment within the last five years.

Although harassment online is on the rise, the most frequent form of anti-Semitic harassment in Germany came from people who made offensive or threatening comments in person.

Some 41 percent of Jews surveyed in Germany said that they'd experienced harassment from a person with "a Muslim extremist view."

That result stands in stark contrast to last year's German criminal statistics which said that 94 percent of reported anti-Semitic crimes were carried out by far-right perpetrators, reported the German daily Bild.

"According to police crime statistics, around 5 percent of anti-Semitic crimes are carried out by Muslims. We have to look into this major discrepancy in the statements about anti-Semitic experiences made by Jews," Felix Klein, the government's anti-Semitism commissioner, told Bild.

The anti-Semitic climate in Germany has made people consider leaving the country, with 44 percent saying they had considered emigrating within the last five years.

Some 70 percent of those surveyed in the eastern European country have said that they have heard or seen non-Jewish people say that "Jews have too much power in Poland" — a massively higher rate than the other surveyed countries.

Nearly all respondents in Poland said they've seen anti-Semitic comments online, but many respondents said they frequently heard such comments from politicians.

When asked whether the Polish government is effectively combating anti-Semitism, 91 percent of the respondents said "no."

Anti-Semitism is spreading across Europe once again. Moscow's chief rabbi, Pinchas Goldschmidt told DW about the fears and hopes of Europe's Jewish communities and warned against radicalization in society. (30.11.2018)