Anti-Semitism: ′Climate has got worse for Jews in Europe,′ says Moscow rabbi | Europe| News and current affairs from around the continent | DW | 30.11.2018

Anti-Semitism is spreading across Europe once again. Moscow's chief rabbi, Pinchas Goldschmidt told DW about the fears and hopes of Europe's Jewish communities and warned against radicalization in society. 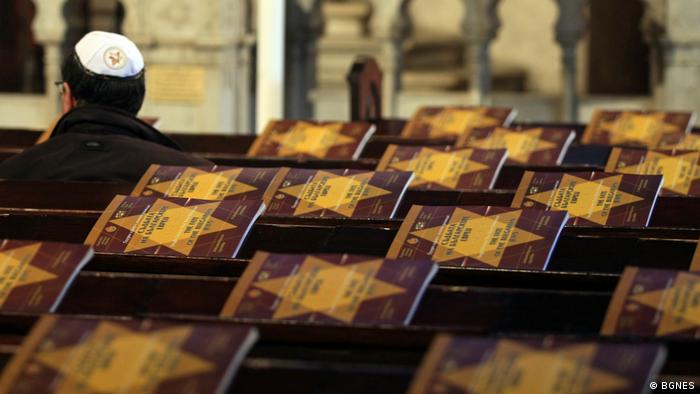 Deutsche Welle: Rabbi Goldschmidt, the presentation of your new book "To the Community and to the World" here in Berlin comes at a time when many are warning about the return of anti-Semitism in Europe. In your book, you write much about the future. Should Jewish communities in Europe be fearful of that future?

Pinchas Goldschmidt: Although I speak about the future with confidence – I do so as a Jew, as a religious Jew and as a rabbi who is always optimistic about the future – one must certainly be concerned about recent changes in Europe. And one must recognize that many of the images that we have seen of late show that the climate has got worse for Jews in Europe. 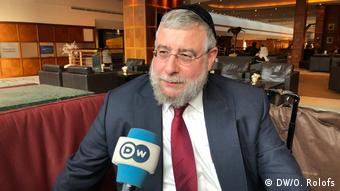 Increasingly, many Jewish families are leaving their homes, or are at least considering it – for instance in France, Sweden or the United Kingdom. Do you see a trend?

The number of Jews living in several European countries has decreased dramatically of late. We are looking at a reduction of roughly 15 percent of Europe's overall Jewish population as a result of their leaving. But there are also trends in the other direction.

The Jewish community in Germany is the only one that is growing. That is encouraging even though the generally worsening climate tells a different story. But the answer to your question lies with individual governments. What are national governments in Europe willing to do to guarantee the safety of their Jewish communities?

In other words, you think European politicians are doing too little and have not taken the steps necessary to curb rising anti-Semitism?

Many politicians claim that a Europe without Jews is unimaginable, that it would no longer be Europe. But the protection of Jewish institutions such as synagogues, schools and community centers is something that individual governments must guarantee. If we think about anti-terrorism measures – such as those undertaken in France, Belgium or Denmark – then we can see that governments are taking responsibility.

And that is the reason the Conference of European Rabbis has taken the position that governments must also take on the same responsibility in protecting Jewish citizens. Until that happens, however, the Jewish community will remain unprotected.

Can one curb or fight anti-Semitism by putting up fences or stationing more police in front of Jewish institutions, or by increasing oversight of social media sites?

Those are indeed reasonable measures but not the only ones. Education is also extremely important, especially among young Europeans and among new immigrants – who must understand and accept European values. Education and integration play an integral role in that regard.

Do you think rising anti-Semitism in Europe is a result of immigration?

Not exclusively. When we talk about anti-Semitism today then, of course, we have to acknowledge that it has a lot to do with the Islamic radicalism that has claimed so many lives over the past 15 years. On the other hand, there is something that we could call "old" anti-Semitism. That exists not only in Europe but also in the US, as we witnessed with the terrible synagogue attack in Pittsburgh a few weeks ago. I do not believe that the threat posed by right-wing radicalism is any less than that posed by Islamic terrorists.

Lets look at Russia. You have lived there for several decades and have been the chief rabbi of Moscow since 1993. How is the situation for Russia's Jewish community?

Jews are welcome in Russia. Today, roughly half a million Jews live there in peace. And Jewish life in Moscow is burgeoning, as can be seen in the city's many Jewish institutions and more than 30 synagogues. You must realize, when I moved to Moscow in the 1980s there were only two synagogues.

Russia's Jewish community is growing because so many Jews from former Soviet republics, such as those in Central Asia, are immigrating. But there are also a great number of Jews leaving Russia as well. Nevertheless, they are doing so in much lower numbers than in the 1990s, when some 2 million Jews emigrated as the Soviet Union disintegrated.

And why are Jews leaving Russia today?

The main reasons Jews are leaving Russia today are the country's worsening economic situation, the fall of the ruble, international sanctions and Russia's increasing isolation on the world political stage. That trend is unsettling to us. Xenophobic tendencies are also growing within Russian society. We are very vocal about what that means for the Jewish community.

In eastern and southeastern Europe – say the Czech Republic, Slovakia, Hungary or Romania – Jewish life and Jewish culture are flourishing despite the mass-exoduses that took place after World War II. There, too, an increase in anti-Semitism can be seen in politics and society at large. How do you view the situation there?

When we speak about eastern Europe we must recognize that there was never any attempt to come to grips with the past – unlike in Germany – neither after World War II nor after the fall of communism. Unfortunately, history is often ignored and the question of shared responsibility for the Holocaust suppressed. Still, there is also a blossoming of Jewish life there as well. But, yes, anti-Semitism in political campaigns is a recurring theme.

Since we are talking about eastern Europe: I can remember that as a young Israeli rabbi in the communist era, I was sent to Romania by Israel's chief rabbi. I visited a man who was the biggest rabbinical presence in the entire Eastern bloc, Moses Rosen, to learn how a rabbi could, and should, operate in a communist dictatorship. That was a life lesson for me. Rabbi Rosen was a historical figure, he was the only eastern European Jewish spiritual leader who was able to actively maintain his congregation despite dictatorship and emigration.

Let's return to the present. What opportunity do you see for interfaith dialogue in light of growing polarization and populist discourse within society?

Dialogue is absolutely essential, not only on a religious level between Muslims, Jews and Christians but also with liberal atheists and agnostics. Today, the values that we established in Europe after World war II are increasingly being called into question. It is imperative that we continue to have dialogue in order to ensure that Europe remains a civilization, a union of diverse peoples and states.

Pinchas Goldschmidt, born in Switzerland, is Moscow's chief rabbi and has been the president of the Conference of European Rabbis (CER) since 2011. He is an advocate for religious freedom and intercultural as well as interfaith dialogue with Muslims and Christians to fight growing radicalization within society.

'The whole of Berlin was burning'

Berlin: Where Jews want to live

Eighty years after Kristallnacht, Jewish life has become common again in Berlin. More than 30,000 Jews now live in the city, despite anti-Semitism and police protection. Christoph Strack reports on the cautious normalcy. (09.11.2018)

Artists in Germany have collaborated to create a hooded sweatshirt with a kippa, a traditional Jewish skullcap, sewn on top. While intended as a statement against anti-Semitism, it also plays with a "provocative limit." (06.07.2018)