Jews in Europe alarmed by rising anti-Semitism | Europe | News and current affairs from around the continent | DW | 07.12.2018

One in four of Europe's Jews have endured anti-Semitic abuse, some violent, in the past year, according to Germany's Bild newspaper. It follows a vow by EU interior ministers to boost security for Jewish communities. 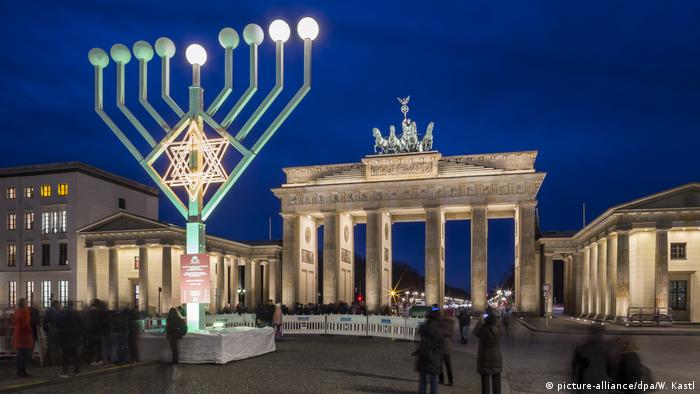 The German mass daily Bild reported Friday that behind the EU ministers' declaration was "a large EU survey among 16,395 Jews in the whole of Europe," apparently still under wraps in Brussels.

A high 89 percent of those respondents felt that anti-Semitism in Europe had increased strongly since 2013, and 28 percent had suffered anti-Jewish abuse, some of it violent, in the past year, said Bild, citing the study.

Read more: Anti-Semitic crime in Germany: 1 in 5 offenses in Berlin

Thirty-eight percent were considering whether to emigrate because of the violent trend, Bild said.

Of those questioned, 85 percent said anti-Semitism was the biggest problem in their country.

The EU has 508 million residents. Jews in Europe amount to about one million or 0.2 percent of the EU population, according to the US-based Jewish Visual Library.

The Israeli newspaper Haaretz recently put the world Jewish population at 14.7 million among 7.7 billion people living on the planet.

The interior ministers in their declaration issued Thursday called on member states of the 28-nation bloc to "increase their efforts to ensure security for Jewish communities, institutions and citizens."

Hatred against Jews "remains widespread," said the ministers, while urging EU nations to boost education around Holocaust remembrance and to train officials across the bloc to accurately record hate crimes data.

In reaction, the World Jewish Congress said the ministers' appeal amounted to EU recognition that "serious action" was needed.

Thursday's EU declaration follows CNN's publication of a survey last month, indicating that a third of Europeans know little or nothing about the Holocaust, seven decades after the end of World War II, in which Nazi Germany murdered six million Jews across Europe.

Nearly one in four survey respondents asserted that Jews had too much influence.

Education was the key to fighting anti-Semitism, a conference in Dusseldorf was told last month by Andreas Verhülsdonk, an inter-religious expert appointed by Germany's Catholic Bishops Conference.

Anti-Semitic cliques were inflamed by the Middle East conflict, said Verhülsdonk while urging Islamic associations and churches to work against such sentiment.

Charlotte Knobloch, former president of the Central Council of Jews in Germany spoke of a "renaissance" in anti-Jewish hatred in Germany — from the far right but also among Muslims and left-wingers.

Felix Klein, the federal government's anti-Semitism commissioner, said Germany's 16 regional states, with their prerogative in education, must ensure that teachers were adequately trained to deal with anti-Semitism.

Klein said 2021 would be an opportunity to make visible "1,700 years of Jewish life in Germany."

European Jews increasingly feel under threat. Now researchers looked into a possible connection between an increase in immigration from Muslim majority countries and a rise in anti-Semitism in Western Europe. (31.07.2018)

The EU's Agency for Fundamental Rights is based in Vienna