For the first time in 18 years, international Jewish service organization B'nai B'rith has held its European congress in Berlin. On the agenda: the renewed threat to Jews in Germany. 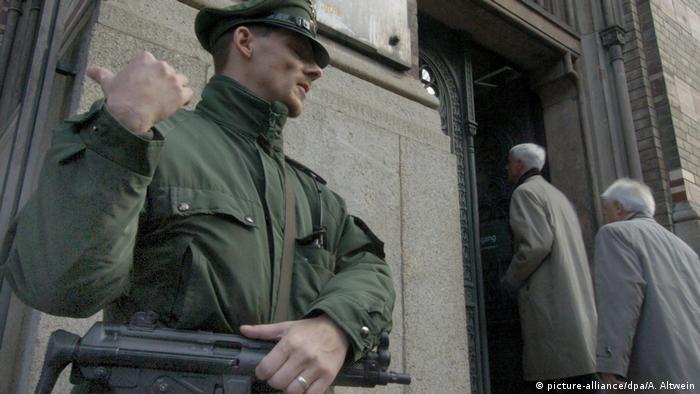 "Are we safe?" The question asked by Andras Kain, head of the B'nai B'rith-affiliated Raoul Wallenberg Lodge in Berlin, went unanswered.

Berlin is home to the largest Jewish community in Germany, Kain told DW at the organization's European congress in the German capital. And he warned that "anti-Semitism has become socially acceptable, right in the midst of our society." The 2019 congress took place just a few hundred meters from B'nai B'rith's former German headquarters in Kleist Street — which later housed the Gestapo secret police of Nazi Germany.

At its last European congress in Berlin in 2001, the organization received anonymous anti-Semitic letters; today, Kain said, the letters have continued, but people are now signing their names, a development that Kain ascribes to the influence of social media.

Felix Klein, Germany's commissioner on fighting anti-Semitism, confirms that Germany is once again experiencing attacks on Jewish facilities, as well as other forms of anti-Semitism. In 2017, he said, there was an average of three incidents per day.

As part of a counterstrategy to bring more visibility to these cases, Klein said the government plans to establish a "reporting and monitoring system." A commission involving the German federal and state governments is to be set up to meet twice a year for that purpose, he added; perhaps as early as spring. Klein said the states are responsible in 80 to 90 percent of the cases, and welcomed the fact that seven states already have a representative for Jewish life; two other states are working to establish a position.

The goal is to find ways to improve education at schools, and to more strongly address the issue in police training. "Anti-Semitism is not a Jewish problem, but one of society as a whole," Klein said.

Anti-Semitism from the left and right

The one-day congress also debated which form of anti-Semitism is the most dangerous — from the right wing, from the left, from Muslims? While Klein thought the debate was "unhelpful," German historian Michael Wolffsohn warned against lumping all forms of anti-Semitism together. Only with a realistic analysis of the problem could "the right therapy" be found to address the problem, he said.

Anti-Semitic attitudes are particularly pronounced among Muslims in Europe, according to figures presented by Wolffsohn. Other participants were convinced right-wing extremists and right-wing populists most frequently stir up anti-Semitism.

Jeremy Issacharoff, Israel's ambassador to Germany, said the far-right Alternative for Germany (AfD) party in particular represents a new threat in Germany because of the "nostalgic attitude" some party members have toward the era of National Socialism. That's why there's been no contact with that party, he said.

Klein maintained his position that he did not want to "hierarchize" the issues. Telling all migrants that anti-Semitism has no place in Germany is part of the integration effort, he said, adding that the goal must be distinguished from the general fight against anti-Semitism.

Wolffsohn urged Jews to be confident when they face the majority society, to stand tall and say: "Here we are — we the Jewish." After all, he said, Germany needs its Jewish fellow citizens to be "accomplished, tolerant and integrated people." But, when it came to security, he said that was the responsibility of the German state.

A small number of Jewish people are founding a group to support the far-right Alternative for Germany party. They say the reports of the AfD's anti-Semitism are overblown. (07.10.2018)

After several high-profile incidents of anti-Semitic violence, Germany's Jewish community has had enough. They have appealed to the government to institute a kind of anti-Semitism oath for groups seeking public funding. (09.07.2018)