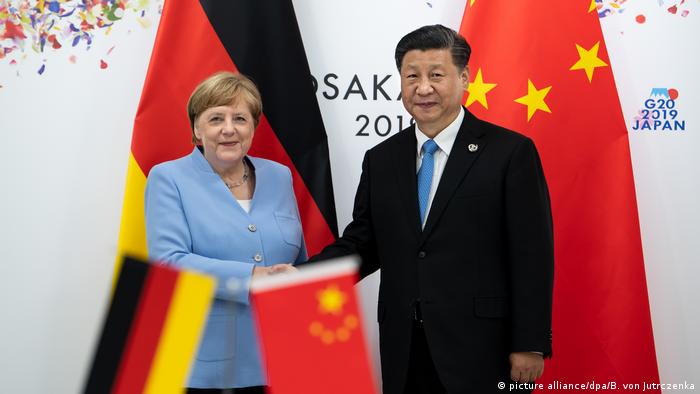 One-and-a-half decades have passed since Angela Merkel was sworn in as German chancellor. In that time, she's visited Beijing on 12 occasions, bringing Germany's ties with China ever closer. But criticism is growing over Berlin's reluctance to take a tougher stance towards Beijing.

Much of Germany's hesitation stems from its desire to maintain harmonious relations, built largely on economic ties. With trade volume between Germany and China hitting €206 billion ($233 billion) in 2019, China is easily Germany's biggest trade partner. At the same time, the European Union as a whole is China's second largest trade partner after the United States.

But when it comes to human rights abuses, Berlin has often been slow off the mark — whether on the mass internment of Muslim Uighurs in Xinjiang or China's new national security law, imposed on Hong Kong since July 1.

In warning Germany against taking too critical a stance towards Beijing, Kaeser also advocated being "thoughtful and respectful" towards China.

"If jobs in Germany depend on how we deal with controversial topics, then we shouldn't add to indignation, but rather carefully consider all positions and actions," Kaeser told German daily Die Welt.

Almost a year on, as Germany kicked off its rotating presidency of the Council of the European Union on July 1, Merkel said she feared that Hong Kong's autonomy was being "eroded" and that Berlin would raise issues such as human rights with China during its six-month tenure. But, as ever, outright condemnation was has been largely side-stepped.

For many critics, in its attempts to continue amicable relations, Germany is being too soft. Didi Kirsten Tatlow, a senior fellow at the German Council on Foreign Relations (DGAP) told DW that people in Hong Kong have, in recent months been "disappointed by the reaction in Germany."

"It has been noted that Germany basically doesn't say anything in public, and has a very a weak response to pressure from China. I think Hong Kong people are smart, they are going to be calculating this in. They're going to be thinking to themselves: do I trust this or not?"

"There is a sense that Germany is not living up to expectations at this point," Tatlow said.

When it comes to handling China, one of the EU's – and Germany's – biggest concerns is becoming trapped in the power struggle between the US and China. But the EU is far from reaching a united policy on China — not least of all due to the impact of Beijing's global ambitions in the years since Xi Jinping took power in 2012.

While Italy has signed up to its mammoth Belt and Road infrastructure project, other smaller European states are building lucrative ties with China, either through Belt and Road or its "17+1" grouping with Central and Eastern European nations.

The EU-China summit, scheduled to take place in the eastern German city of Leipzig in September, was hoping to change that. It was a chance to send a signal at least of European unity on China policy, with the potential to reshape relations for the new decade. A better deal for European companies investing in China and closer cooperation on climate change topped the agenda.

In early June, however, it was postponed — notably not canceled. A statement from Merkel's spokesperson said the COVID-19 pandemic was to blame.

While the summit remains postponed, calls for a coordinated response to China at the EU level are growing louder — both from activist groups, as well as politicians.

Speaking to DW, German Social Democrat (SPD) and former president of the European Parliament Martin Schulz said a European appeal to China "must be linked to clear economic messages."

"Access to the market for Chinese goods could be blocked if [China] will not respect international responsibilities and duties [it] subscribed to."

Christian Lindner, party leader of the Free Democrats (FDP), told DW that in reacting to China, business and democracy "shouldn't be pitted against each other."

"We cannot let our values be bought," Lindner said, adding that the economic dependency between the EU and China runs in both directions.

"I don't think we need to immediately speculate about sanctions, but defining a position of values must now be the task of the German government."

Katrin Kinzelbach, a professor of international politics of human rights at FAU Erlangen-Nürnberg, says that talk about sanctions without a clear plan of how they could work is not helpful.

Instead, one suggestion would be to take the issue to the International Court of Justice in The Hague because the new security law implemented by Beijing amounts to a violation of the Sino-British Joint Declaration on Hong Kong.

"Beijing will reject any involvement of the Court," Kinzelbach told DW. "But such a step would at least send a clear message that the new law is unacceptable."

Adopting a so-called Magnitsky law in the EU would also allow targeted travel bans and asset freezes against individuals involved in human rights violations — anywhere in the world, including in China.

While criticism may be growing at home, Germany is not more reluctant than other countries to raise concerns about human rights in China, Kinzelbach says.

"All countries must balance their interests vis-a-vis Beijing. It's important to understand that Merkel does not have the power to change decisions taken in Beijing," she said.

"But her voice matters."