Is the US-China rivalry tangling a coronavirus vaccine with geopolitics? | Asia | An in-depth look at news from across the continent | DW | 22.06.2020 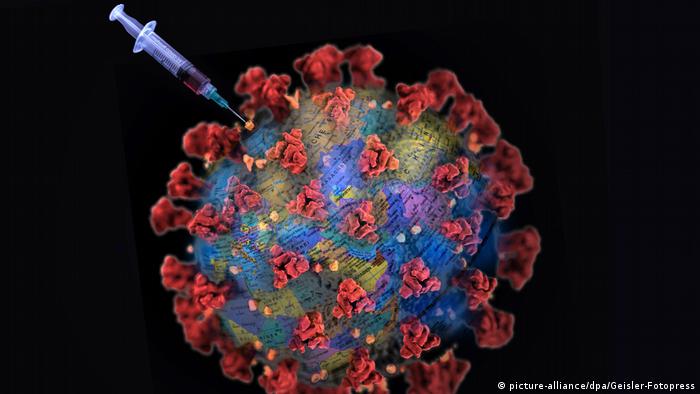 The increasingly bitter United States-China rivalry is drawing international concern that politics will be put ahead of public health if either country is the first to come out with an effective vaccine for SARS-CoV-2.

Four of these are being developed by Chinese research institutions and two by US-based biotech and pharmaceutical companies. Another leading vaccine candidate from Oxford University/AstraZeneca in the United Kingdom has a $1.2 billion (€1.07 billion) US investment attached, and the US pharma giant Pfizer is working with Germany's BioNTech on developing a candidate currently in phase two trials.

Both the US and China want to turn the narrative away from their initial shortcomings in response.

"Given that the pandemic has become wrapped up in the geopolitical competition between the US and China, being the first to develop a safe and effective vaccine could bring some benefits to the 'winner' of the vaccine race," said David Fidler, a cybersecurity and global health expert at the US Council on Foreign Relations.

US 'warp speed' ahead

The US plan is to pump $10 billion (€8.92 billion) into research, manufacturing and purchase agreements in a campaign dubbed "Operation Warp Speed."

It includes six major US pharmaceutical companies, and AstraZeneca, with the goal of having at least 300 million doses of a vaccine in stock by January.

At a Senate Armed Services Committee hearing last week to confirm General Gustave Perna to lead the operation, the general said the US would be willing to work with "any nation that offers cooperation or information relevant to developing vaccines," adding that this would not include China.

Some members of the committee questioned if this would make the US and its allies more vulnerable, if China comes up with an effective vaccine first.

Currently at the head of the pack in the US is the Cambridge, Massachusetts-based biotech firm Moderna. It was the first US biotech company to launch human trials in March, and announced positive preliminary results in mid-May, as the vaccine produced antibodies in a small sample size with minimal side effects, according to a press release. Its CEO estimates production could begin in July.

A week after Moderna shared its results in May, US intelligence agencies warned Beijing-based hackers were trying to steal research data and intellectual property in the US related to vaccine research.

The agencies didn't provide any evidence, and two weeks ago Beijing responded after a US senator echoed the accusations in a TV interview.

If "China is trying to sabotage western countries in their vaccine development, then please let him present the evidence. There's no need to be shy," said a Chinese foreign ministry spokeswoman.

"I have no doubt that China and other countries have been attempting to exfiltrate information from US organizations on pandemic-related activities, including vaccine development," Fidler told DW.

"I would not be surprised if the US government was engaging in its own cyber espionage against Chinese research," he added.

Vaccines made in China

As the source of the SARS-CoV-2 outbreak, China was the first country to map the genome of virus in January. China's development of a vaccine is being portrayed at home as a "resolute battle" fighting "shoulder to shoulder" with the world.

China's most high-profile candidate is being developed by biotech company CanSino, in cooperation with China's Academy of Military Sciences. The vaccine in currently in phase two trials with 500 subjects at a hospital in Wuhan. CanSino's first phase in March also yielded results showing antibody production with minimal side effects.

And this week, another Chinese candidate, Sinovac, showed promise in a preliminary trial with 743 healthy volunteers, according to a statement released by the company.

Chang Lung-Ji, president of Shenzhen Geno-Immune Medical Institute, a Chinese lab working on a candidate vaccine, told DW that China's expertise in molecular medicine means it could "surpass the US in the COVID-19 vaccine race."

China's President Xi Jinping has been trying to build international backing for a vaccine made in China, and he promised at May's WHO summit to share a Chinese vaccine as a "global public good."

China has also pointed at the US for not signing a WHO resolution declaring that a SARS-CoV-2 vaccine should have fair and equal distribution.

The head of the National Institutes of Health, a US public health body involved in vaccine development, has said that he agrees that a vaccine should be distributed around the world to those who need it most.

Cooperation vs. Competition - which will get us a Covid-19 vaccine faster?

However, neither country is obligated to share, and domestic demand for inoculation clearly outweighs political demands for global equity.

The "winner" will also be obliged to address the politically delicate balance between enormous domestic demand of a vaccine and the need for equitable global access, according to Fidler.

"Any safe and effective vaccine will give the US or China the ability to make it available in ways that serve their respective national interests," he said, adding that low-income countries have enough experience to recognize that access to a US or Chinese vaccine will come with political strings attached.

"How this plays out is really not clear because we simply have not experienced a context in which a vaccine for a pandemic becomes intertwined with geopolitics," said Fidler.

Public health experts at Harvard Medical School warned in a recent article that "vaccine nationalism," or a "my country first" approach to distribution is the wrong way to reduce global transmission of SARS-CoV-2, as countries without access to a vaccine threaten to prolong the spread.

But there are signs that global cooperation is rising to the challenge. And both the US and China are cooperating with other countries on vaccines, just not with each other.

And other countries aren't depending on altruism from the US and China when it comes to a vaccine. Germany has called for an alliance of European nations to secure access to a vaccine, and the EU is prepared to tap a €2.4-billion ($2.7-billion) emergency fund to make advanced purchases of promising candidate vaccines.

Although the current shortlist of vaccine candidates is US-China heavy, there are over 120 candidates in preclinical evaluation, with more entering human trials every week as scientists around the world jump over regulatory hurdles to develop a vaccine faster than has ever been done before.

With the sheer volume of candidate vaccines, and the necessity of international manufacturing supply chains, it may not matter if the US or China get there first, or which country plants its flag on a vaccine.

"In view of the large number of vaccine projects in different countries and continents we do not expect global distribution conflicts. Rather, we expect that vaccination against COVID-19 can be started in many countries more or less simultaneously," Han Steutel, president of the German Association of Research-Based Pharmaceutical Companies (vfa), told DW.

The AstraZeneca vaccine candidate, for example, is the product of a British research institution working with a British-Swedish pharma conglomerate, with clinical testing being done in Brazil.

In agreement signed earlier in June with Indian vaccine manufacturing giant, the Serum Institute of India, AstraZeneca secured the production of 1 billion doses of the Oxford candidate vaccine for developing countries. If the vaccine is proven effective, 40% of this could arrive by the end of 2020.

"It is not particularly important which company or public-private partnership is the first to gain an approval for its vaccine and from which country it comes," said Steutel.

"It is more important that a whole range of vaccines are getting approved and produced in a timely manner, because this is the only way to meet global demand."