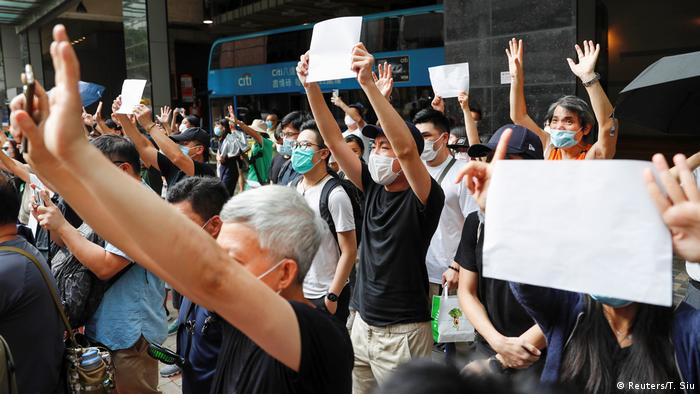 The United Nations on Friday expressed concern over the speed and ambiguity of the new security law that Beijing has imposed on the semi-autonomous Chinese city of Hong Kong.

The Geneva-based Office of the United Nations High Commissioner for Human Rights said that a preliminary analysis of the controversial security law found that offences are not clearly defined, which could leave it open to interpretation and risk it being applied in an arbitrary or discriminatory manner.

"We are alarmed that arrests are already being made under the law with immediate effect, when there is not full information and understanding of the scope of the offences," said UN human rights spokesperson Rupert Colville at a press conference in Geneva.

Colville noted that the definitions of some offences were "vague and overly broad."

"This may lead to discriminatory or arbitrary interpretation and enforcement of the law, which could undermine human rights protection," he said.

The spokesman noted, however, that the security law affirms fundamental freedoms, due process in court, and political rights.

Worry from the EU

German Foreign Minister Heiko Maas said on Friday that European Union (EU) ministers will also discuss possible threats to Hong Hong's freedom under the security law at their next meeting.

Chancellor Angela Merkel had said earlier she was worried the city's autonomy was being "eroded" and that Germany would raise issues of China's human rights status during its presidency of the EU that began this month.

The UK and the US have also condemned the national security law and threatened Beijing to hit back with sanctions or offer sanctuary to Hong Kongers.

Canada announced on Friday that it will suspend its extradition treaty with Hong Kong in the wake of China's move to impose the law. Foreign Minister Francois-Philippe Champagne also said Canada will no longer export sensitive military items to Hong Kong in the future.

Beijing says it's looking to restore stability in the territory after a year of protests, which turned violent at times, and not suppress the freedom of Hong Kongers.

Meanwhile, China appointed party official Zheng Yanxiong to head the office set up by the legislation that extends powers to mainland security agents to operate in Hong Kong.

Zheng, 56, is a hardliner best known for quelling protests on the mainland. In 2011, he earned his reputation for stamping out at times violent anti-corruption protests in the village of Wukan, east of Guangdong province.

"He is a tough enforcer, a law and order person," Willy Lam, an expert on China's Communist Party at the Chinese University of Hong Kong, told French news agency AFP.

Friday's appointment of Zheng to the security agency came as a man accused of deliberately driving his motorbike into a group of police officers on Wednesday became the first person in Hong Kong to be charged under the security law. Three people were reportedly left wounded.

A new security rule for Hong Kong has been welcomed by businesses focused on China, but the longer-term damage to Hong Kong's autonomy and business environment could prove serious. (01.07.2020)