In Italy, China's New Silk Road is not seen as a threat

The Mediterranean country is the first in the G7 to join China's Belt and Road Initiative. But in one small port town in Italy, Chinese investment is nothing new. DW's Giulia Saudelli and Mu Cui report from Vado Ligure. 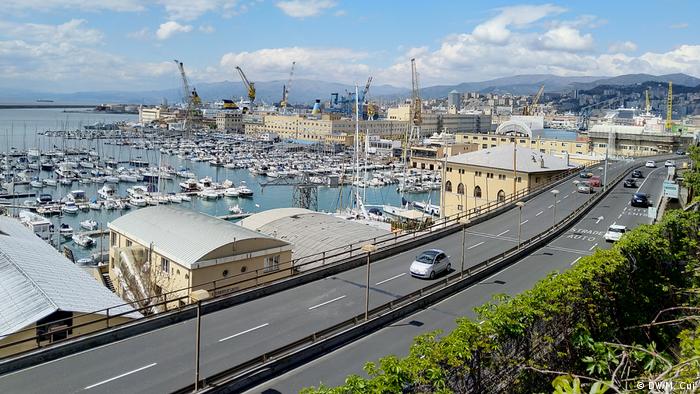 There is a busy back and forth of workers and dusty trucks in Vado Ligure, a small coastal town of 8,000 people in the northwest of Italy.

Traditionally an industrial town, which has recently witnessed a downturn in the local economy, Vado has been put on the international map as a herald of Chinese business interests in Italy.

This week, Italy's government will take part in a Belt and Road Initiative (BRI) summit in Beijing — just one month after joining the BRI and signing several deals on trade and infrastructure with China, the first G7 country to do so.

But as the mayor of Vado Ligure, Monica Giuliano, tells DW, her town "got started with the famous Silk Road that everyone is talking about already a few years ago."

In 2008, a project to build and manage Italy’s first semiautomated port was awarded to Netherlands-based APM Terminals, part of the Danish conglomerate Maersk.

In 2016, APM Terminals transferred 40% of shares in the port to Cosco Shipping Port and 9.9% to Qingdao Port International —  both Chinese companies and "two partners with whom we already have successful business relationships," says Paolo Cornetto, APM Terminals general manager for Vado Ligure. 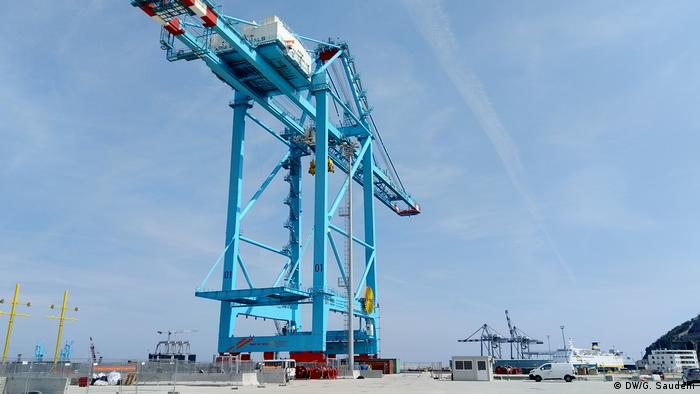 New cranes are being tested at the Gateway Terminal in Vado Ligure, which is still under construction

The Gateway Terminal is expected to be fully functional by the end of this year, and the joint venture, which includes the Chinese, will manage it and the neighboring Reefer Terminal for 50 years.

The Reefer Terminal, Cornetto says, is the most important port hub for fruit in the Mediterranean — with huge quantities of bananas, pineapples and kiwis arriving to Italy from Central and Latin America and Western Africa. APM Terminals plans to maintain and further develop the fruit trade in the future.

In terms of employment, "between the two terminals, the port in Vado Ligure will be able to handle more than 1 million containers per year," Cornetto tells DW. "We also expect to employ 300 people when the terminal is completed in 2020, and up to 400 when we reach full capacity."

Who's afraid of the Chinese?

Work at the construction site continues relentlessly, the moving cranes beeping loudly as workers with bright orange protective helmets move among them.

At the same time, substantial criticism and a dose of fear over Italy's entry into the Belt and Road Initiative have been coming in over the last few weeks.

In particular, other countries in the European Union and the United States worry that Italy may fall into a pattern of dependency and debt accumulation that has been in evidence in other countries that joined the BRI since its inception in 2013.

EU Budget Commissioner Günther Oettinger warned that the "autonomy and sovereignty of Europe" must not be endangered, and German Foreign Minister Heiko Maas said that in the short term lucrative offers could "leave a bitter aftertaste faster than expected."

In the US, the National Security Council official account tweeted that “endorsing BRI lends legitimacy to China’s predatory approach to investment and will bring no benefits to the Italian people." 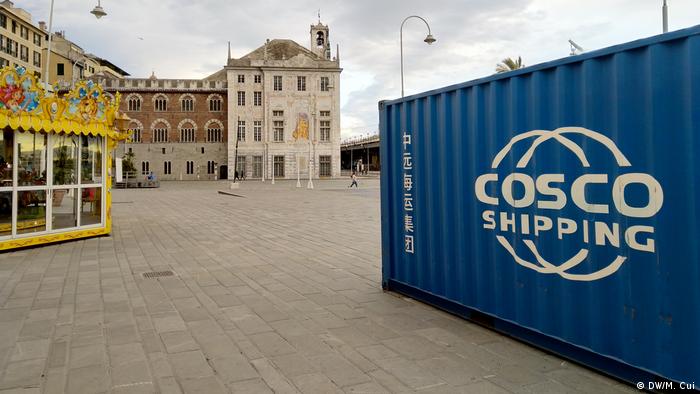 A COSCO container sits in the port of Genova. Behind it, the headquarters of Genova's Port Authority

COSCO denies that it has any such intentions. In a written statement, the company said its investments abroad are locally very popular, and they are confident that the Sino-Italian cooperation in the new Silk Road will be increasingly successful.

"We always adhere to the win-win principle," COSCO wrote. "Namely, we don't simply take, nor are we a mere speculative financial investor. Our investments are intended to ensure better development opportunities for local regions."

It's not all naysayers

In Italy, Paolo Emilio Signorini, president of the Genova Port Authority, which is also responsible for Vado Ligure, says he doesn't believe a European country like Italy has to fear any debt trap.

"We have some sustainability problems with public debt, but I don't think that in Western Europe there is a concern that a public authority may not able to repay a major project like this one," he told DW.

The business world is not scared either.. Gian Enzo Duci, president of Federagenti — a federation of Italy's shipping agencies — says the companies are looking at China's investment with enthusiasm, and read it as a sign of possible future growth.

"The fact that the Chinese are strongly interested in the Italian ports, mainly, Genoa and Trieste, is an indication that in the future, if we make good investments in rail infrastructure, we can be the door of China towards not only northern Italy, but also Switzerland, Bavaria and Baden-Württemberg," he says.

Italy is ready for China

It's not just the Italian government and businesses who are rooting for the new Silk Road — the people of Vado Ligure, where it has been a reality for almost three years, also look at the Chinese investment with hope.

Monica Giuliano, the mayor of the town, has been a strong promoter of the new terminal project since its inception.

As Vado continues to struggle with a strong economic downturn, it desperately needs new investments and new jobs, and the fact that these are also coming from Chinese companies is not seen as a problem. 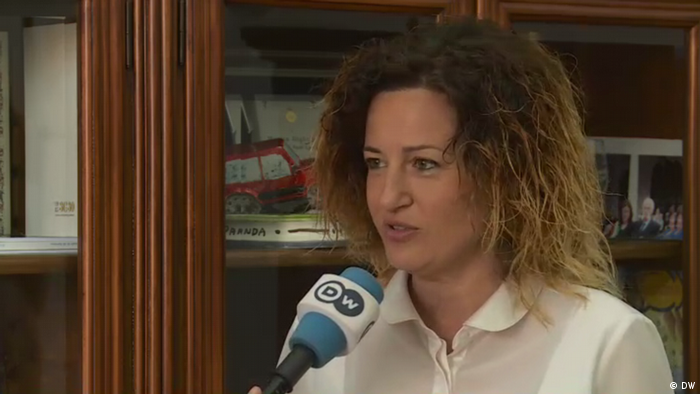 The Mayor of Vado Ligure, Monica Giuliano, tells DW she is excited about the new terminal

On the one hand, the presence of a strong investment partner brings new opportunities, more money and a bigger scope for action; on the other hand, she tells DW, there is no need to fear debt, or fewer rights for the terminal's workers.

"There is no fear, but a desire to continue on the plan we set forth," she says.

"I think we are good at our job," says Claudio Bosio, general secreaty for CISL in the Savona-Imperia area, as we meet in Vado. "Here in Italy there are laws, there are contracts, and we will monitor the situation. Workers are more concerned with finding a job quickly."

Danilo Causa, who is in charge for CISL's local transport federation, tells DW "there is absolutely no fear of China."

"The Chinese are already operating in Italy. We are experts with regards to the Chinese, they come, they invest, they make money. For us, it's important that they bring employment and that they respect the rights that workers have always had."

The citizens of Vado Ligure also appear to be supportive.

Back in 2008, in a town referendum, citizens voted against the terminal project, but the number of votes wasn't sufficient for the motion to pass. Today, they have elected a mayor who strongly supports the new terminal, and talking to DW, nobody said they were against it.

"It's definitely not a very nice sight to have outside my window. But it brings jobs, so that's a plus," says Marco Maietta. 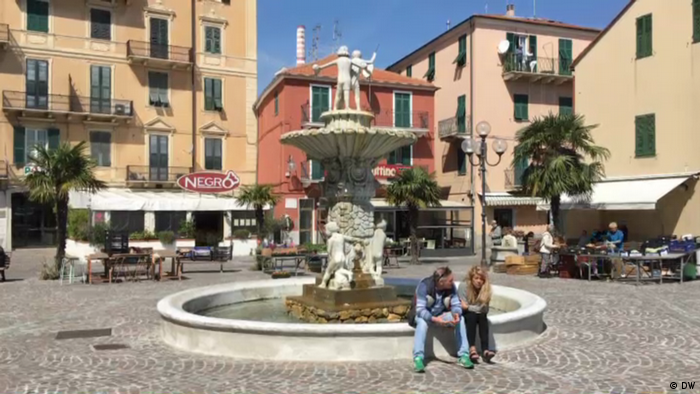 Vado Ligure's main square. Locals are in favor of the new terminal and are happy to welcome Chinese investment, if it brings jobs

And with regard to the Chinese involvement, any investment is welcome.

"There's no problem with the Chinese," Vilma Calvini tells DW. "They are very welcome with their money."

As Italy's neighbors and main economic partners remain wary of the country’s closer connections with China, the Italian government and the people in Vado Ligure don’t seem too troubled.

Though the European Union is calling for a unified approach to trade with China, the individual member states are courting the country for investment. That has created quite the tightrope act, DW's Frank Sieren writes. (29.03.2019)