Italy has become the first G7 country to join China's massive Belt and Road project. Debt-burdened Rome is eager to boost trade, but Washington and Brussels are uneasy about Beijing's global ambitions. 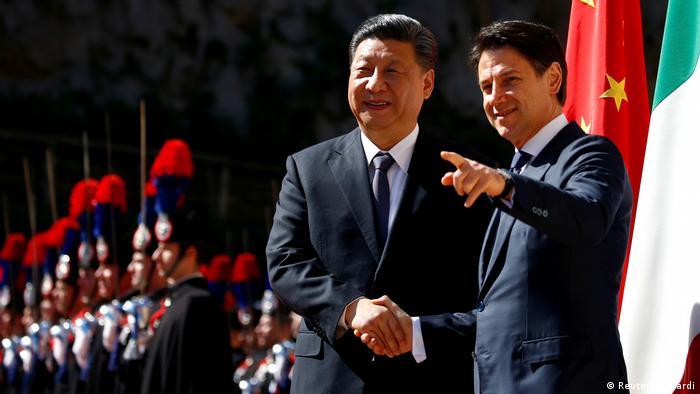 Italy signed on to China's Belt and Road Initiative (BRI) at a ceremony in Rome on Saturday.

It is the first Group of Seven industrialized nation to endorse the massive project — an ambitious trade and infrastructure scheme that has seen Beijing make major investments in ports, roads, airports and railroads in Asia, Africa and parts of Europe.

The pact was inked during a three-day visit to Italy by Chinese President Xi Jinping, and at a time when Beijing is locked in a trade war with the United States.

Critics fear the BRI could help China expand its reach by getting control of critical technologies and infrastructure. But Rome has pressed ahead with its support for the scheme, playing down these concerns and brushing off reservations among its European Union allies.

Italy's populist government is keen to boost trade and investment to revive the country's struggling economy.

Chinese and Italian firms also signed 10 additional deals worth up to an estimated €20 billion ($22.6 billion) in the energy, steel and gas pipeline sectors, according to a source quoted by the Reuters news agency. Italian media put the value at €5 billion.

"China appreciates Italy's willingness to play a positive role in developing a healthy and stable China-Europe relationship, and its devotion in pushing forward the connectivity of Asia and Europe," Chinese President Xi told journalists after arriving in Rome on Friday.

He is due to fly to the Sicilian city of Palermo later on Saturday before traveling on to Monte Carlo and then France on Sunday.

Since it began in 2013, Belt and Road has been accompanied by complaints that it leaves behind huge debts and makes governments beholden to Beijing, so much so that several nations, such as Malaysia, have pulled out of plans to join.

The EU has also voiced concerns that with Chinese construction projects come unfair Chinese business practices, where most firms involved are backed by the government. Europe is also critical of how China forces foreign firms to give up trade secrets in order to do business within its borders.

At an EU summit on Friday, the bloc said it was preparing its own strategy to counter Beijing's influence, referring to China as a "systemic rival."

My Europe: The dangerous 'Balkanization' of the EU

In today's European Union, bickering local elites rely on the support of global powers. Europe has been torn apart by competing factions, warns Ivaylo Ditchev, a cultural anthropologist from Bulgaria. (23.03.2019)

Italy's economy contracted in the last two quarters of 2018, and the slowdown is expected to continue into 2019. Italy's problems are having their effects on the rest of the eurozone. (31.01.2019)