This DW series explores China's rise as a global superpower. In this article we examine the "Chinese Dream," which shapes the present and reaches far into the future, encapsulating President Xi's vision for the country. 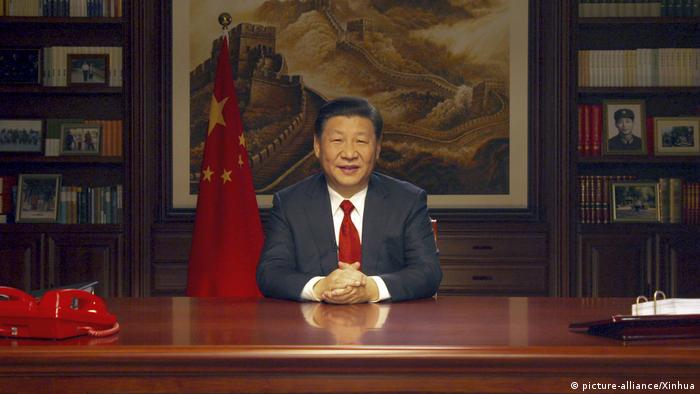 The rest of the world rubs its eyes in astonishment. In just under three decades, China has transformed itself from being a bitter-poor developing country into a global economic power. Beijing now has set its eyes on becoming a world superpower. For now, at least, fears about China's rising power and influence are mixed with admiration for the rapid pace of its growth and development.

The Chinese people, on the other hand, and especially the political class in Beijing, see the strengthening of their country as the correction of a historical anomaly. This view is promoted by Beijing's propaganda departments and President Xi Jinping's "Chinese Dream" is meant to address it.

Since Xi took over the reins of his country in 2012, China's state and party leaders have promised the Chinese people the return to the grandeur of past dynasties. By doing so, Xi has attempted to tap into the historical consciousness of the Chinese.

Today's Chinese see themselves as the heirs of a millennium-old civilization that was the world leader in culture, science, technology and administration right up to the 16th century. In this ideal conception, China — the "Middle Kingdom," as it is still called in Chinese today — was at the center of the world, surrounded by barbarians, who were willing to pay tribute to the luminosity of Chinese civilization.

The so-called "century of humiliation" stands out all the more against this background. It began with China's defeat in the First Opium War (1839-1842) by Great Britain. In the first of the so-called "unequal treaties," China was forced to cede control of Hong Kong to the British. The century has a formal end that suits official propaganda: The founding of the People's Republic of China in 1949 by the Communist Party.

The Century of Humiliation forms the antithesis to the rise of China. Who knows that China's share of world economic output in 1820 was over 30 percent? Following internal Chinese rebellions, colonial exploitation, state collapse, Japanese occupation and civil war, this share had fallen to just 5 percent in the early 1950s.

The phantom pain of losing imperial greatness is kept alive in the collective memory. History books, television series and newspaper articles repeatedly evoke the humiliation of the Chinese nation by foreign powers, the decline and misery. This culture of remembrance has paved the way for the mass appeal of Xi Jinping's Chinese Dream. In doing so, as a collective vision proclaimed from above, it is the exact opposite of the "American Dream" of the realization of individual happiness. 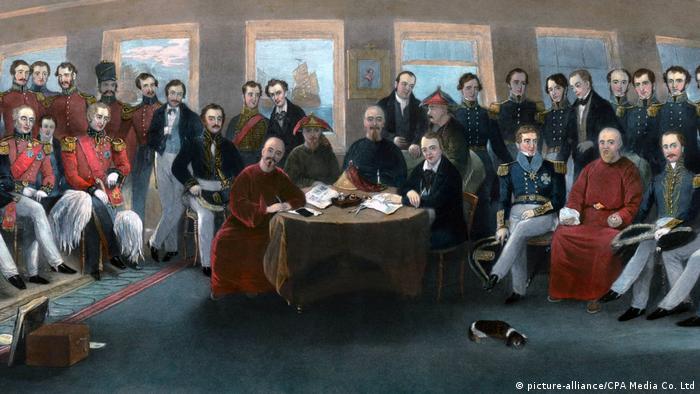 The Treaty of Nanjing was signed in August 1842 to mark the end of the First Opium War. It was the first of the so-called 'unequal treaties'

The plans for the "great rejuvenation of the Chinese nation" extend to 2049, the year marking the 100th anniversary of the founding of the People's Republic of China. By then, China should once again emerge as a global superpower. It seems as if the nobler the goals and the farther into the future their fulfilment, the greater the sacrifices one can demand from the people. When it comes to the "rejuvenation of the Chinese nation," nothing like civil liberties or cumbersome constitutional processes should come in the way, according to Beijing's view. Dissenters, human rights activists, even their lawyers end up in jail. The previously hard-won liberties, even in the media, are again being scaled back.

The vision of the Chinese Dream is so vague and at the same time so comprehensive that different messages can fit under its roof.

Anyone who has the authority to interpret the content of the vision can define almost anything as an element for the realization of the Chinese Dream. When Xi Jinping visited the Three Gorges Dam in April, for instance, the ability to independently develop technology was declared essential to realizing the dream. When Xi met with senior military officials in mid-March, it was the greater integration of the civilian and military spheres. Furthermore, there have been repeated exhortations for unity and the development of strength.

How China is trying to export its soft power

In its ambiguity, the Chinese Dream is also suitable as a tool for fomenting Chinese nationalism, which has been gaining traction for the past two decades. It is important as a source of legitimacy for the rule of the Communist Party, as the party's legitimacy, in ideological terms, has been eroded due to its role as the organizer of a highly effective form of state capitalism, with party workers and government officials as main beneficiaries despite Xi's unprecedented anti-corruption campaign.

China's robust maneuvering in the territorial spat with Japan in the East China Sea, and the building of artificial islands in the South China Sea to enforce its claims to the region, also serve the purpose of deliberately stirring the Chinese people's nationalist fervor.

With the Silk Road to the middle of the world

Against this backdrop, Xi's signature project — the Belt and Road Initiative — also fits under the umbrella of the Chinese Dream. China is deploying immense resources to build infrastructure that will connect it to parts of Asia, Africa and Europe and boost its trading links to these regions.

This ambitious project makes China the only country in the world currently pursuing a global vision. And it is certainly no coincidence that the Belt and Road Initiative, regarded as a modern-day version of the ancient Silk Road, also linguistically ties up with times of former splendor.

With its clever investment policy, China has been increasingly able to translate its economic strength into political influence. The new transport links and economic corridors will definitely play their part in the development of the Chinese Dream, by strengthening Beijing's role as a Eurasian center of gravity and turning it once again into the "Middle Country."

It goes without saying that this center should then radiate out into the world. At the Communist Party's congress last fall, Xi called for "Socialism with Chinese Characteristics for a New Era" and recommended it as a development model for other countries. At the start of the year, The People's Daily, an official newspaper of the Communist Party, went as far as to talk of a fusion of the "Chinese Dream" with the "Dream of the Whole World."

In a rare move, President Xi Jinping and his ideology have been officially adopted to the Communist Party constitution. The move hints at Xi's plans to be China's most powerful leader since Mao Zedong. (24.10.2017)

Opinion: China's Xi Jinping — the man who decides the fate of billions

China made a series of historic decisions at its 13th National People's Congress in Beijing. Not only will President Xi Jinping be able to rule indefinitely, he is more powerful than ever, says DW's Philipp Bilsky. (20.03.2018)