In a rare move, President Xi Jinping and his ideology have been officially adopted to the Communist Party constitution. The move hints at Xi's plans to be China's most powerful leader since Mao Zedong. 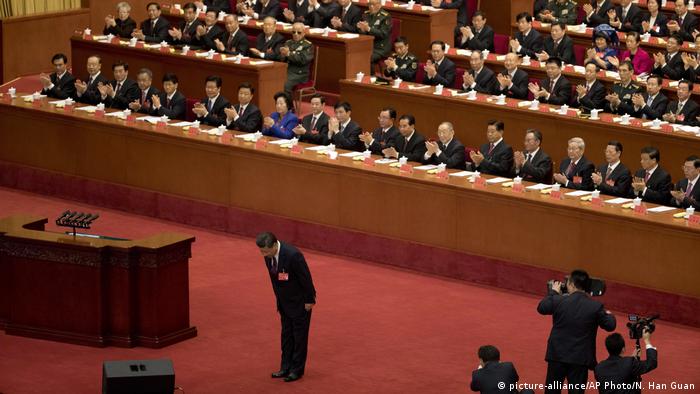 The Communist Party in China announced on Tuesday that it was adding the name of President Xi Jinping and his political philosophy to the party's constitution.

"Xi Jinping Thought on Socialism with Chinese Characteristics for a New Era," is set to be enshrined alongside that of Mao Zedong, the founder of modern communist China. Former President Deng Xiaoping had his name added after his death.

The unusual step highlights the speed and tenacity with which Xi consolidated power since his ascension in 2012.

The official reading of the amendment said Xi's ideology will be "a beacon for the work of the party." Its guiding principles include a heavy emphasis on the Communist Party's role in controlling every aspect of society from the economy to citizens' activity on social media.

According to Willy Lam, politics professor at the Chinese University of Hong Kong, the inclusion of Xi in the constitution will "enable him to be like Mao, leader for life as long as he's healthy."

The announcement was made during the closing session of the country's National Congress — a huge one-week event held every five years. Some 2,300 party members gathered for the summit in Beijing, which will see a new Central Committee and Politburo Standing Committee elected on Wednesday.

Xi is certain to be handed the customary second five-year term as party general secretary.

The president opened the congress by hailing a "new era" that would see China become a "a global leader" by 2050. Xi has cultivated an image as a responsible, level-headed leader during a tumultuous time for Western politics.

What Chinese President Xi Jinping had to say about market reforms

In his keynote address at the opening of the Communist Party congress, Chinese President Xi Jinping has said economic and financial reforms will be accelerated. What exactly is the leadership aiming to do? (18.10.2017)