Rome and Beijing are expected to ink billions worth of deals, as well as plans for cultural exchanges. Xi sought to assure European leaders that there was "no fundamental conflict of interest" between them. 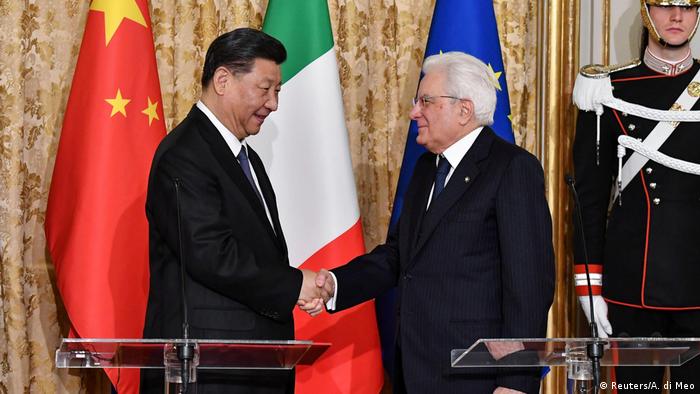 On Saturday, Italy is set to be the first western democracy to sign on to China's massive Belt and Road initiative, as Chinese Premier Xi Jinping begins his official state visit to Rome. After Xi met with President Sergio Mattarella, the two promised to fortify the "new Silk Road" between their countries.

"The old Silk Road was an instrument of knowledge among peoples, of sharing, and of mutual discoveries. So, too, the new one must be a two-way street, along which travel not only merchandise but also ideas, talents, knowledge, long-term solutions to common problems and future projects," Mattarella said at a joint press conference on Friday.

"Between us, there is no fundamental conflict of interest," Xi told journalists after the meeting. "China wants commercial exchanges to go both ways and for investment to flow in both directions."

Despite reservations from its EU allies, Rome is pressing ahead with its support for China's Belt and Road scheme — a sweeping infrastructure program that has seen Beijing make major investments in ports, roads, airports and railroads in Asia, Africa, and parts of Europe.

"China appreciates Italy's willingness to play a positive role in developing a healthy and stable China-Europe relationship, and its devotion in pushing forward the connectivity of Asia and Europe," Xi said.

Italy's populist leaders have had different reactions to the deal. Deputy Prime Minister Luigi Di Maio of the Five Star Movement (M5S), said "Today we say 'Italy first' in trade relations, while remaining US allies, in NATO and in the EU."

Salvini has said he will not attend the state dinner for Xi at Mattarella's Quirinal Palace.

Read More: The possible impact of China's Belt and Road agreement with Italy

EU: China is a 'systemic rival'

Since it began in 2013, Belt and Road has been marred by complaints that it leaves behind huge debts and leaves governments beholden to Beijing, so much so that several nations, such as Malaysia, have pulled out of plans to join.

The EU has also voiced concerns that with Chinese construction projects come unfair Chinese business practices, where most firms involved are backed by the government. Europe is also critical of how China forces foreign firms to give up trade secrets in order to do business within its borders.

At an EU summit on Friday, the bloc said it was preparing its own strategy to counter Beijing's influence, referring to China as a "systemic rival."

Xi's two-day visit is expected to produce dozens of deals worth billions of euros, as well as cultural exchanges such as holding a top-flight Italian Serie A league match in China. Xi has made no secret of his desire to turn China into a successful football nation.

Much of Rome was closed on Friday as Xi received lavish red-carpet treatment and maximum security. Later, Mattarella and his wife will host a dinner in which Andrea Bocelli will perform.

Italian leaders are expected to sign a memorandum of support Belt and Road on Saturday. Xi is also scheduled to visit Monaco and France during his European tour.

China's Great Wall Motor Corporation has voiced interest in bidding for Fiat Chrysler. The Italian-American carmaker has been grappling with rising costs and seeks to develop technology for self-driving vehicles. (21.08.2017)

When in Rome, do as the Chinese do

If it goes ahead, Rome's recognition of China's Belt and Road Initiative would expose the depth of the cracks in EU unity. It comes ahead of a meeting to decide on the bloc's stance on China under US pressure. (09.03.2019)