While Italy wants a part in China's new Belt and Road project, the European Union as a whole would like to halt China's increasing influence. DW's Frank Sieren argues that a common strategy is needed. 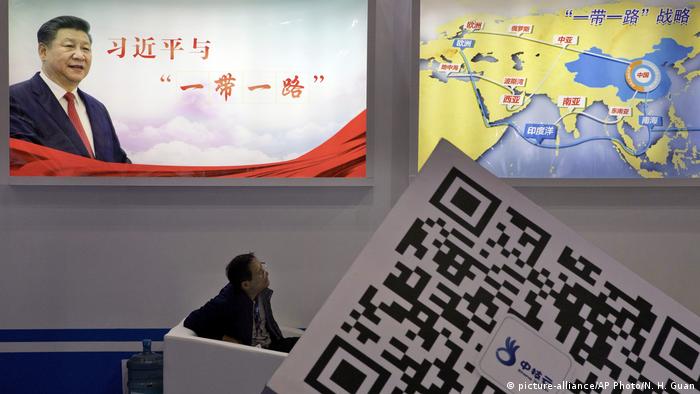 Each country has its own perspective on the world, and it's usually related to that country's domestic situation. A decade after the financial crisis, Italy's economic growth remains slow and unemployment is high. Besides Greece, no other eurozone member has as many debts. In a recent report, the OECD predicted that Italy's economic growth would decrease by 0.2 percent in the coming year.

Thus, this offer from Beijing comes at the right time for the pragmatic Italian government: China wants to invest in Italy if the latter becomes the first big Western industrial state to join China's Belt and Road Initiative, a multibillion-dollar project designed to improve Beijing's trade reach. Regardless of what the EU thinks, Italian Prime Minister Giuseppe Conte plans to sign a preliminary accord at the end of March when Chinese President Xi Jinping visits.

Italy is not the first EU state to show an interest in China's new Belt and Road Initiative. Portugal, Bulgaria, Croatia, the Czech Republic, Greece, Poland, Slovakia, Slovenia, Hungary, Malta and the three Baltic states have already signed investment treaties with Beijing. But Italy, as the fourth-largest economy in the EU and the eighth in the world, is of a different caliber.

Italy's plans with China could not come at a worse time for the EU. Earlier this month, the European Commission published a strategy paper announcing it intended to put more pressure on China. Beijing may well be a "cooperation partner," it said, but it should more closely follow international rules. Rules, of course, written up by the West.

There is talk of "non-discrimination," "equal treatment" and the "openness of systems." The paper states also that the "EU itself needs to adapt to changing economic realities and strengthen its own domestic policies and industrial base."

Of course, it makes sense to talk about this subject. However, to really achieve results, all of the EU member states have to speak the same language, otherwise the paper will be a nonstarter. For Brussels, the case is clear: Beijing hopes to buy more influence with its Belt and Road project and split the EU. It is wooing the EU's poorer states into dependence with loans and promises of investment. Greece and Hungary have both already vetoed joint EU declarations regarding China's human rights situation and other such controversial matters.

Deep fears in the US

Washington has a similar viewpoint to that of the EU, and this did not begin with US President Donald Trump. Garrett Marquis, a National Security Council official in Washington, recently described China's initiative as a "vanity project." There is huge concern that China is beginning to undermine the US hegemony in Asia, Africa and Europe. The US ambassador to Italy, Lewis Eisenberg, has warned Rome against signing the agreement with Beijing.

Brussels, for its part, should look at its own role in the situation. Many EU states started to look elsewhere after expressing their dissatisfaction, to no avail. Now, Brussels is calling for their solidarity and saying that all states are responsible for ensuring their policy toward China adheres to EU laws, rules and political line. But, of course, Brussels cannot force EU states to do this.

Italy hopes to be able to boost its ailing exports by participating in the Belt and Road project. Products "made in Italy" are very popular in China, and China hopes to gain more access to the EU via the ports of Trieste, Palermo and Genoa. Michele Geraci, the Italian undersecretary of state for economic development, who worked in China for many years and speaks fluent Mandarin, recently said there was great potential that other countries were already using.

Geraci said he knew China very well and was in a good position to recognize the risks. Whether or not he was overestimating himself, China currently offers the most attractive alternative to countries whose economies are stagnant or that are struggling to keep up with the eurozone economy.

Force is not a strategy

There is a risk that the EU-China paper will simply be shelved. In the long term, it will be impossible to force EU states to cut their economic ties with China. Few will toe the line; Beijing knows this and is playing its cards right: That's why Chinese Foreign Minister Wang Yi recently said: "Italy is an independent country. We trust you'll stick to the decision you have independently made."

Rome has already backpedaled, stating that for the moment it is just contemplating signing a non-binding declaration of key interests and is also still in talks with Washington about the matter. In the end, however, Italy will only give in if Brussels offers something.

The pressure is on: EU heads of state will meet at the European Council on March 21. China will be high on the agenda. Xi Jinping is due to visit Rome the next day.