Germany marks 30 years since the fall of the Berlin Wall

Berlin was the scene of daylong celebrations to commemorate the 30th anniversary of the fall of the wall that divided the city. Angela Merkel vowed during a memorial "that no wall will separate people ever again." 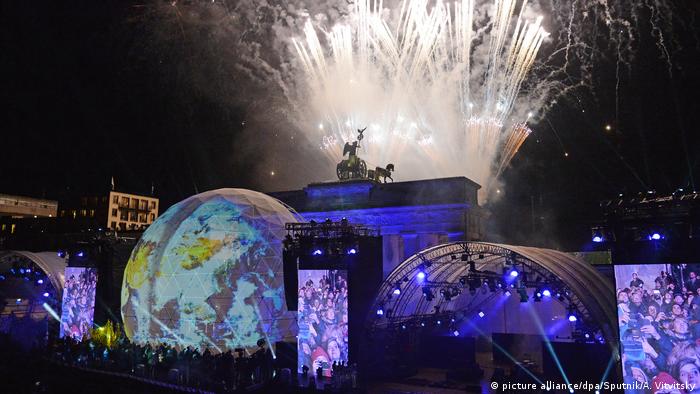 Germany celebrated on Saturday the 30th anniversary of the opening of the Berlin Wall, a decisive event in the fall of communism in Eastern Europe.

Chancellor Angela Merkel and President Frank-Walter Steinmeier led the official ceremonies, which took place at the iconic Brandenburg Gate and Bernauer Strasse, where one of the last sections of the wall remains.

Elsewhere in the city, light installations, concerts and public debates took place, including a concert at the Brandenburg Gate.

Read more: The day the Berlin Wall came down

Among the festivities, the Trabant Club Middle Hesse, which promotes the old East German car, rode through the city in a procession. One of the city's football clubs, Hertha Berlin, also had a wall-tearing fan choreography ahead of its home game.

Leaders from Poland, Hungary, Slovakia and the Czech Republic were present at the official events. At Bernauer Strasse, they joined Steinmeier in placing roses in the once-fearsome barrier that divided the city for 28 years.

Merkel: 'The Berlin Wall is history'

Merkel spoke at the Chapel of Reconciliation, which was constructed on the spot where the East German regime tore a church down to give snipers a better view of people fleeing to the West along the former death strip.

Read more: How war has changed since 1989

"I remember those who were killed at this wall because they were seeking liberty," Merkel said at the memorial.

"We want to ensure that no wall will separate people ever again," she said.

"The Berlin Wall is history. Which teaches us this: No wall that segregates people and limits freedom is so high or so wide that it can't be broken through."

Following the ceremony, locals flocked to the Bernauer Strasse memorial to visit the site and light candles.

At the Brandenburg Gate celebration, Steinmeier touched on the chasm that still exists between east and west, which has deepened as the far-right gains a foothold in the former communist East.

"A new wall has arisen that cuts through our country — a wall of frustration, a wall of anger and hate," Steinmeier said.

"Walls that are invisible but which divide. Walls that stand in the way of our cohesion," he warned, as he called on Germans to "tear down these walls, at long last."

Reactions from around the world

Memories and reflections poured in from around the world. Outgoing EU Commission President Jean-Claude Juncker described the fall of the Wall as a "peaceful revolution," pushed through by people who "risked their own freedom to achieve freedom for all."

"The Berlin Wall did not fall 30 years ago," Macron said in a tweet published in both French and German. "It was brought down by bravery of thousands of people who desired freedom, paving the way to German reunification and European unity. Let us also be brave and worthy of their expectations."

Read more: What it meant to be a punk in East Germany

US President Donald Trump praised Germans for the "tremendous strides that have been made in reuniting their country and in rebuilding the former East Germany."

"The eyes of the world watched as a generation of East Germans reclaimed their God-given liberties with each successive swing of their hammers," he added.

30 years on, we know not everyone gained from German reunification. Easterners were not the only ones who felt they lost out — the "guest workers" of the former West should also be counted among them, says Erkan Arikan. (10.11.2019)

The larger-than-life statue sits atop the US Embassy, near where Reagan gave his "tear down this wall" speech. Merkel thanked the US for its help, but she reserved her praise for a different former US president. (08.11.2019)