The larger-than-life statue sits atop the US Embassy, near where Reagan gave his "tear down this wall" speech. Merkel thanked the US for its help, but she reserved her praise for a different former US president. 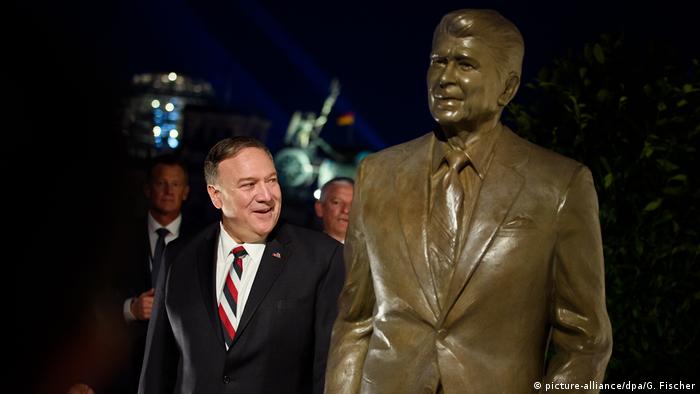 A bronze statue of former US President Ronald Reagan was presented in Berlin on Friday, on the eve of the 30th anniversary of the fall of the Berlin Wall.

US Secretary of State Mike Pompeo unveiled the 7-foot (2.1-meter) statue, hailing it as a "monumental moment."

The statue sits on the embassy's terrace, overlooking the landmark Brandenburg Gate and the site where Reagan gave his famous 1987 speech urging Soviet leader Mikhail Gorbachev to support peace and "tear down this wall."

Pompeo praised Reagan, saying he "courageously denounced the greatest threat to that freedom, the Soviet empire, the evil empire."

In a press conference earlier with Pompeo, German Chancellor Angela Merkel thanked the United States for its support in reunification, but she mentioned another US leader in her remarks.

"That the USA, along with George Bush, helped and supported us on the path to German reunification is something that we will never forget," she said at the press conference with Pompeo. 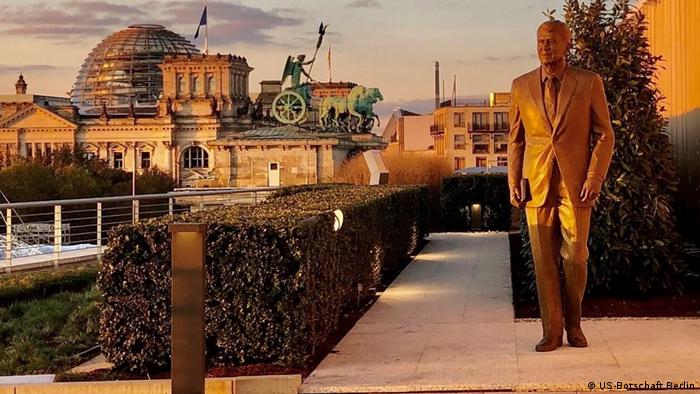 The 7-foot statue overlooks the site of Reagan's "Mr. Gorbachev, tear down this wall" speech of 1987

Former US President George H.W. Bush served after Reagan, but was in office for the fall of the Wall and has been remembered for his key support in achieving German reunification.

Berlin officials have rejected accusations that Reagan has been given short shrift in memorials in the city — pointing out that a plaque already marks the site where he held his speech and that he was named an honorary citizen in 1992.

"The contributions of US Presidents John F. Kennedy and Ronald Reagan to Berlin as well as to German unity are well known in Berlin," Sabine Bangert, a Berlin lawmaker in charge of memorials, told the Associated Press.

"Kennedy's ... 'Ich bin ein Berliner' speech and Ronald Reagan's memorable Berlin sentence from 1987, 'Mr. Gorbachev, tear down this wall,' as well as Barack Obama's speech at the Brandenburg Gate in 2016, are in all of our memories," she added.