Ronald Reagan is already an honorary citizen of Berlin, so city authorities have always deemed a statue inappropriate. Nonetheless, a bronze replica of the former president is set to be inaugurated at the US Embassy. 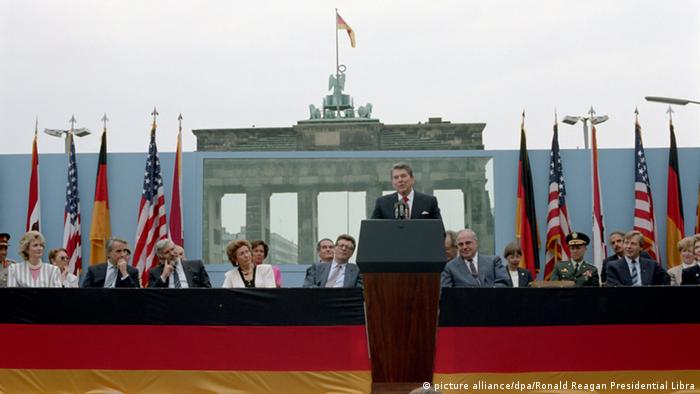 US Secretary of State Mike Pompeo will unveil a statue of former US President Ronald Reagan at the US Embassy on Friday, The Wall Street Journal reported Thursday.

Pompeo is in the German capital to commemorate the fall of the Berlin Wall.

Reagan, who passed away in 2004, became an honorary citizen of the city in 1992. Local officials felt that was sufficient.

However, following a proposal by US Ambassador Richard Grenell, the German capital is getting a bronze image of the former president anyway.

For over 10 years, the United States has wanted to honor Reagan with a statue in Berlin. However, the administration of the capital had till now rejected numerous applications from US officials and dignitaries.

Berliners had mixed reactions to the new statue. One older woman told DW that she did not mind a statue of Reagan as the US had been a "protecting power" over West Germany. But a man in his 30s told DW he was opposed to the statue.

"I wouldn't be too happy to connect the fall of the Berlin Wall to Ronald Reagan because he was quite a conservative president," he said. "He made the Cold War much more intense than it was before."

Despite this, the United States went ahead with plans to erect a 7-foot (2.1-meter) statue of the late head of state on the balcony of their Berlin embassy. It overlooks the site of the old Berlin Wall and the Reichstag building that houses the German Parliament, the exact spot where Reagan gave a speech in 1987 where he called on Soviet counterpart Mikhail Gorbachev to join forces to reunify Germany and "tear down this Wall."

Natalia Smolentceva contributed to this report.

Official ceremonies marking the fall of the Berlin Wall have come to a close. More than a million people traveled to the German capital on Sunday to celebrate the 25th anniversary of the event. (10.11.2014)

My picture of the week | 30 years of the famous speech