Gorbachev to defend Putin in Berlin

Mikhail Gorbachev says he will defend current Russian President Vladimir Putin while at a 25th anniversary ceremony of the fall of the Berlin Wall. Gorbachev claims Washington is to blame for the Ukraine crisis. 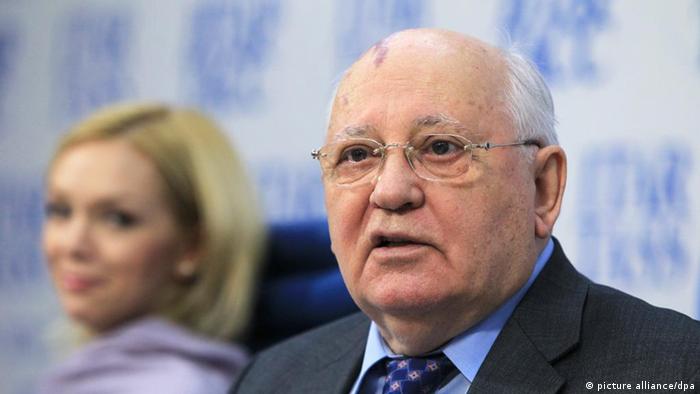 Former Soviet leader Mikhail Gorbachev said he will defend Russia's policy in Ukraine and President Vladimir Putin when he meets with top German officials this week, for the festivities marking the 25th anniversary of the fall of the Berlin Wall.

"I am absolutely convinced that Putin protects Russia's interests better than anyone else," Gorbachev said.

The last leader of the USSR is set to meet German Chancellor Angela Merkel and President Joachim Gauck during the ceremony, which comes at a time of bitter confrontation between Russia and the West.

The communist who changed history

Gorbachev also said that the current Ukraine crisis provided an "excuse" for the United States to pick on Russia.

"Russia agreed to new relations, [and] created new cooperation structures. And everything would be great but not everyone in the United States liked it," he said in an interview with the Interfax news agency on Thursday. "They have different plans, they need a different situation, one that would allow them to meddle everywhere. Whether it will be good or bad, they don't care," Gorbachev said, referring to Washington.

The 83-year-old is widely praised for his decision not to use force to stop the wave of changes in Eastern Europe during the final years of the Cold War. He is also credited for the reforms of glasnost (openness) and perestroika (restructuring) after coming to power in 1985, and allowing the Wall to fall in 1989, thus effectively ending the Cold War. He has often criticized Vladimir Putin for his authoritarian style of government.

A quarter century after the fall of the Iron Curtain, many former Soviet officials say they feel betrayed by the West. Several politicians from that era have told the AFP news agency that the reunification of Germany was allowed only under the condition that NATO would not expand to the east, into an area traditionally considered a Russian sphere of influence.

Former Gorbachev advisor Anatoly Chernyaev swears that he personally witnessed a pledge from Washington to the Soviet leader not to enlarge NATO.

"With my own ears, I heard Secretary of State James Baker promise Gorbachev on February 9, 1990 in the Kremlin's Catherine the Great hall that NATO would not extend 'even an inch' to the east if we accepted the entry of a unified Germany into the alliance," he said.

Western leaders from the same period have rejected claims that such a deal with the Kremlin ever existed.

The fall of the Wall - a chronology of resistance

After decades of despotic rule, 1989 saw the Communist bloc collapse. But the resistance movement began much earlier. (06.11.2014)