'You should be gassed': What it meant to be punk in East Germany

They were outsiders, teenagers, rebelling against confinement. They were despised by citizens loyal to the state, harassed by GDR authorities, and locked up in prison. But being punk also meant freedom. 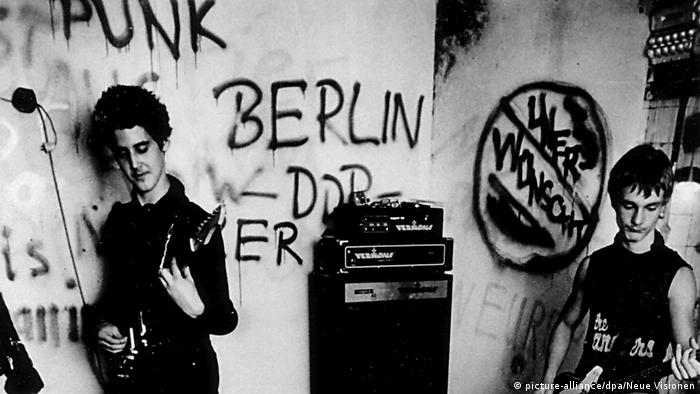 It all started in the early 1980s. Small groups of punks formed in East Berlin, in Leipzig and later across East Germany — and their numbers grew fast. They were not welcome in regular pubs or clubs so they met in basements, backyards and churches. People were hostile to punks on the street with some hissing they "should be gassed," and they were harassed by the repressive state regime. Stasi chief Erich Mielke called them "decadent" and "filth from the West." Parents no longer wanted anything to do with their own children.

Youngsters who ventured outside with a mohawk haircut and a dog collar around their necks were spat on or stopped by the police for no good reason — they were sometimes arrested if they boarded trains. Being a punk in East Germany was not very pleasant and it certainly wasn't decadent.

'Wherever you go, they check your ID. One false word and — and you know what is going to happen' (Planlos)

The "real" punks decided who was really punk and allowed to belong and who wasn't. People they didn't want in their groups were told to remove, for instance, the safety pins they had skewered through their lips, cheeks and ears. Less polite punks simply snatched the unwelcome person's leather jacket. 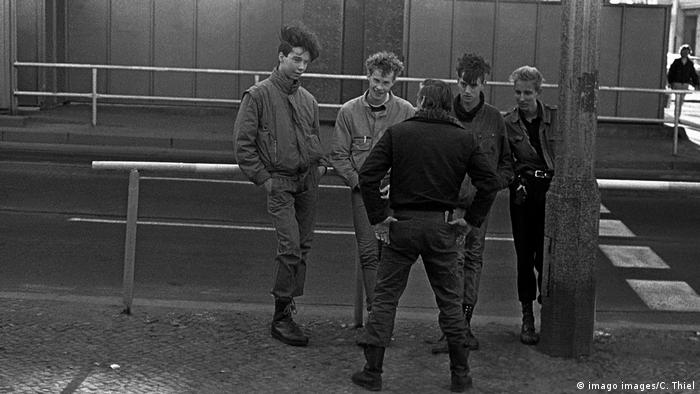 People who dressed like this were instantly considered suspicious

Punk-style clothes were not easy to get in East Germany, and what was available came at a price. The punks made sure leather jackets were ripped or smeared in exactly the right places — they really were out to shock people, and spent a lot of time in front of the mirror getting their outfits just right. Hair was dyed with ink and whipped into shape using shaving cream or soap — a problem in the rain when it all dissolved and ran into the person's eyes.

'I can't be what you want me to be, I don't fit in grey concrete' (Wutanfall)

Being different was what mattered, a bit of freedom in an unfree state. Punk music was the East German punk movement's soundtrack, but punk music from the West was not for sale in East Germany. The easiest way to get a hold of western punk records was to get one's grandparents to go shopping in West Berlin, since East Germans who had retired were allowed to travel to the West. Grannies were sent to record stores, shopping lists in hand. "If grandma had a B52's record in her hand when she entered the country, there wasn't much the border guards could do. They thought it was okay if grandma brought something like this with her," says Bernd Stracke, better known as just "Stracke," who used to sing in the band Wutanfall back in the day, in the documentary film Too much future. Others bought punk records in Bulgaria and smuggled them into the GDR in the sliding doors of the trains. 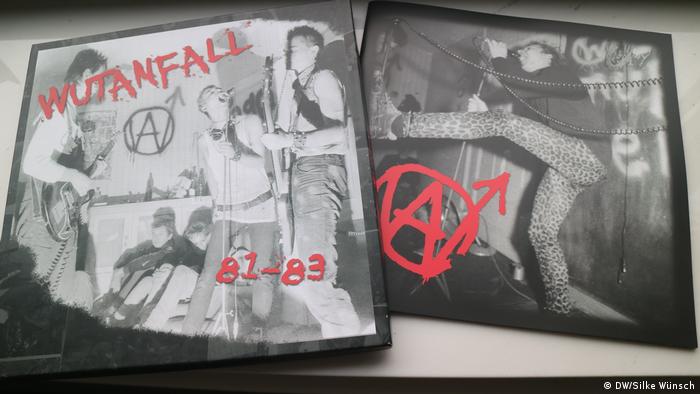 The band Wutanfall was not allowed to make records. The cassettes from that time are now available on vinyl

Punk bands gave concerts in apartments and artists' studios, and there would be other punks in the audience, as well as artists, actors, directors, writers and poets. Often the police came and put an end to the event.

Protestant pastors made space available to the outsiders, and the concerts were moved to church buildings. The churches were, after all, a safe zone, virtually untouchable to state bodies. They were in fact "observed from the outside but the cops never came in and shut down the concert," says a man who went by the name Colonel in his East Berlin punk heyday. 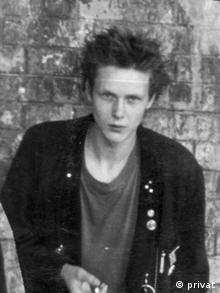 Wutanfall quickly became a target of the Stasi secret police. One of the band members, who went by the name of Chaos, was intimidated, subpoenaed repeatedly, maltreated, his driver's license was withdrawn and he was kicked out of his apartment.

Some young punks couldn't stand the pressure, and committed suicide.

'With a club in my hand, I fight for my fatherland, on top of the anarchist, I'm a policeman' (Schleim-Keim)

Stasi head Erich Mielke continued to take tough action against the punks. The secret police attacked individual punks and resorted to a perfidious tactic to "corrode" the scene from within: to unsettle the youthful punks, the Stasi spread rumors that they had already infiltrated the scene. The rumors turned out to be true. Informants pretended to be punks, even musicians in the bands.

Two of them were Wutanfall band members, Stracke found out much later when he was given access to his Stasi file. He remembers the Stasi actually tried to recruit him, too, telling him that if he joined, he could "stay in the scene and do whatever you want," but if he declined, they would make his life hell.

Stracke declined, and was imprisoned twice. 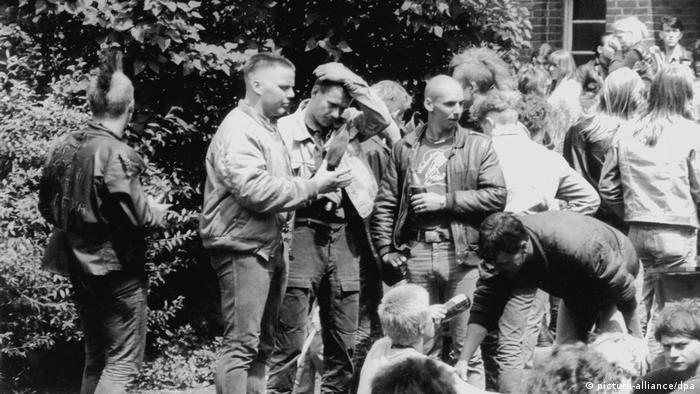 The first time he was arrested was in 1983, at the opening of the Documentary and Short Film Week in Leipzig.

"Our pastor had told us not to get caught carrying protest symbols like candles, purple scarves and flowers. Of course we brought candles, purple scarves and flowers," he told DW. "We were arrested for forming a mob. Later they called it hooliganism — but all we were doing was simply standing around." It was big in the western press. Everyone saw us getting beaten up in front of a movie theater," he added.

'We'll get out one more time, then we are terrorists!' (Namenlos)

When Stracke got out of prison, many of his friends had been deported to West Germany. And, again thanks to the Stasi, he faced hard times. "I bit on granite everywhere, nothing worked for me anymore." But he wanted to stay, he wanted change in the GDR. With his new band L'Attentat, he decided to mince words no longer, no messages between the lines: It was time to move "straight ahead." 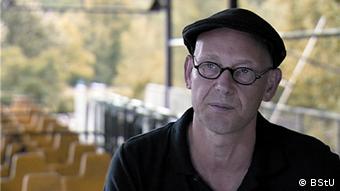 As a result, Stracke was summoned and interrogated again in what East Germans called "clarification of facts." The authorities found the band's lyrics in his apartment, as well as reports he had written about the GDR underground that were published in West German newspapers. Once again, Stracke was arrested for "humiliating the socialist order" and "spreading news abroad that could harm the interests of the GDR." Stracke was sentenced to a year and seven months in jail. After his release in 1985, he left for West Germany as part of a deal in which the West German government regularly bought the release of East German political prisoners.

'I live where schizophrenia reigns, where every square stares at you, where people build walls, where no one dares say a word' (L'Attentat)

The East German regime didn't mind letting the punks go. Some didn't even have to apply to leave the country; they were kicked out and not allowed to return. In his book One Love, Two Worlds, Dresden journalist Torsten Preuss describes how he tried to survive as an maladjusted young man in the "most boring country in the world" with all its harassment. A punk and a man of "pacifist ideas," the Stasi had it in for him. 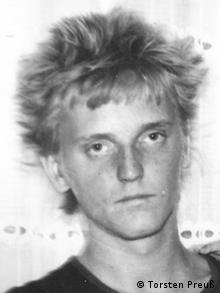 Torsten Preuss had to wait two years and three months, until his family was allowed to follow him to the west

He said he still can't understand how stupid most people in the GDR were. "You grew up completely stupid unless you tried to get your hands on something like we did; you had to fight for every book that contained different thoughts," he told DW. Preuss rebelled, disobeyed and finally applied for him and his family to leave the country. He paid a heavy price in the end, separated from his wife and young son for years because only he was allowed to leave.

The day after the fall of the Berlin Wall, Preuss took on a job as a freelance reporter for the taz daily newspaper and emigrated to Australia with his family, only to return to Dresden where he runs a Youtube channel designed to shed light on the GDR and to make sure East Germany is not romanticized.

The former rebels have no nostalgic feelings for East Germany. They also never understood the western punks' attitudes at the time. They professed to have no future, but had every opportunity at their fingertips, says Stracke — while the citizens of East Germany had their futures mapped out for them. In the GDR, punks were persecuted because they wanted to live freely. "We stood up for our cause with our faces and our names — and paid for it."

A concert venue in eastern Germany has blocked leftist punk band Feine Sahne Fischfilet from performing over fears they could incite far-right protesters. Critics have called the decision an assault on artistic freedom. (21.10.2018)

East German musician Wolf Biermann took the stage in West Germany in November 1976. His performance unleashed a chain reaction of criticism from both the communist state and its citizens — with historic consequences. (04.11.2019)